A Zoo of beautiful monsters:

Note: At the end of the post is a list of all the linked web addresses, listed in order, for those who don't trust blind links. Image above: The Large Magelenic Cloud, one of the closest galaxies to our own.Image courtesy of astronet.

A Zoo of beautiful monsters:
Just a brief post today; PhD work and pesky real life have been taking up a lot of my time, and the next post-a journey through the solar system as the first stages of planetary accretion were kicking in- is bit of doozy to write as there a still a lot of unanswered questions about that time. Even so it is in the works, and I hope to have it finished within a week.

For now though, a brief report on the vast [1]Tarantula nebula. This is an immense region of collapsing, churning, star birthing, gas and dust, located in a small (by galaxy standards) next-door galaxy; the [2]Large Magellanic Cloud. Probably similar to the pre-solar nebula that gave rise to our sun, planets, and ultimately us- but much much bigger; there is no known star forming region in our galaxy, or any nearby galaxies, as big as this.

Image above: The immense Tarantula nebula, almost a thousand light years across. Image courtesy of NASA.

In The Dominion of Great Beasts:
Nestled in the center of the 650 light year wide cloud is the [3]RMC 136 super star cluster: a hive of some of the biggest, most power full, most violent, stars ever found by astronomers. The cluster is only a a couple of million years old, and is composed of [4]blue giant and [5]super giant stars, as well as unstable [6]Wolf Rayet stars. These are terrifying things to be around: Surface temperatures of 25000 to 50000 degrees kelvin, dense stellar winds that can reach 2000km/s- that's almost 1% of light speed- hundreds of times faster than any space ship ever built.

Image above: A three stage zoom into the intense light of the RMC136 super star cluster. Left to right: the tarantula nebula, the nebula central section, and the super star cluster itself. Image courtesy of the European Southern Observatory (ESO).

The cluster provides most of the energy that illuminates the stunningly beautiful tarantula, and contains few stars less than 20 times as heavy as our sun. To a man these will live fast, burn brightly, and die young as a supernova blast.

The nebula is home to many more extreme entities: including [7]giant blue stars that are thundering through space at hundreds of kilometers a second- as though hurled out of the central cluster by their even larger siblings. Black holes and neutron stars from ancient supernova likely lurk between the folds of gas and dust. In the extreme conditions of the nebula it is even possible that 'strange' or quark stars lurk- entities that have only been guessed at by theory, and could re-write the stellar family tree. 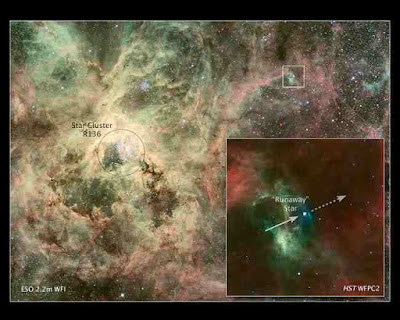 Image above: A huge blue star, weighing 90 solar masses, has been thrown out of the Tarantula nebula at over 100 km/s. How is unknown, but has likely lost some sort of gravitational battle with one or more of the hypergiant titans in the central cluster. Image courtesy of ESO.

This incredibly fertile area of the universe exists due to its location: as its home galaxy tears through space at 300 km per second the tarantula nebula sits right on the leading edge- crushing the [8]interstellar medium there until it begins to collapse into huge star forming regions.

Near the core sit twelve monstrous suns, weighing in at up to 80 times our suns mass each. At in the very middle sit the triplets: three stars that are brighter than almost anything else in the galaxy besides each other. And the mightiest, [9]R136a1, is not just lord of the cluster and nebula but is, as far as we know, the biggest star in the entire universe: 8.7 million times as bright as our sun, 265 times as heavy, and destined to end its life in one of the rarest events: a [10]Hypernova, an explosion more than 100 times the size of a supernova. Image above: The biggest star in the known cosmos, RMC136a1, sits amid smaller stars that would still swallow our sun hundreds of times over. Image courtesy of ESO.

No place for an Earth.
Any planets in the central cluster must be orphaned wanderers from the outer regions, for the central stars will not live long enough to develop planets: what sights may have passed through those alien skies?

At our distance of 160,000 light years the view is impressive. From a planet inside the cluster it would be mind altering: the nebula is so bright that if it were as close to us as a thousand light years it would cast your shadow onto the ground. Inside the central cluster there could be no night; not with every section of sky housing a titan sun. No planet near one of these monsters would hold onto its atmosphere, and the surface would be quickly exposed to a spectrum of radiation on par with the output of an industrial laser, or greater, in its intensity.

The blue giants and super giants and titanic engines of fusion power, self sustaining hydrogen bombs on an immense scale: they put out over a million times the radiation of our sun, and most of that is searing, DNA shredding, high energy UV. The bare rock beneath your feet would be radioactive from absorbing high speed particles spat out by the savage Wolf-Rayets. However advanced a suits protection, I suspect the only reaction that would make sense at first would be a headlong dash into the relative coolness of the closest cave- shutting out the terrible vision of unimaginable power filling the sky.

With time to adjust mentally, and a sophisticated filter to return the view to something the human eye could process, it would a sight of incredible beauty: a sky full of scattered short lived sapphire suns, against a multicoloured backdrop of brutally [11]ionised gas. The suns themselves would look oddly deformed: the stellar winds they blow are so dense it is as though the surface of the star is exploding into space, making them into smears of intense light rather than well behaved orbs.

Like all beauty it is short lived: on the edge of the nebula the [12]Hodge 301 cluster has already lost its biggest and brightest as supernova, after a paltry 20 million years of life. The closest supernova of recent time [13]1987a, also occurred in the tarantula nebula.

One thing is clear- for spectacular power and drama the tarantula nebula is hard to beat in the southern skies.

How do we know this?
The Large Magellanic Clouds great spider has been studied for centuries, using ground based telescopes, and more recently from space, and in [14]near infra red light. Near infra red light is useful to astronomy because it is not absorbed or scattered by dust particles in nebula like the tarantula. This property allows astronomers to view inside structures like nebula and globules that are opaque to visible light.

Surveys of this region have been made by many telescopes including the [15]Hubble Space Telescope and the [16]Very Large Telescope in Chile; it was combining data from these two instruments that allowed the monstrous hyper giant star R136a1 to be identified. The most recent is the [17]VISTA ( Visible and Infrared Survey Telescope for Astronomy) [18]survey of the Magellanic Clouds, which will map an area of sky a thousand times that of the full moon. The VISTA scope itself is located at the [19]Paranal observatory in Chile, and this latest survey of the tarantula nebula is hoped to uncover more details of the less staggering, but still scientifically fascinating, areas of star birth in the nebula's outer regions. The survey also hopes to scan inside the Bok globule cocoons of growing giant and super giant stars in the region.

Image above: The 4 meter VISTA telescope, in its dome in Chile. Image courtesy of ESO.


This VISTA project, and other past present and future, will provide us with a detailed view of star formation in this incredible region of space and further inform our ideas of how our own lovely but humble star system came to be.

Next (I promise): The Long Road To Worlds Of Rock And Gas.