A quick note on the new news from Ceres

For a while now the Dawn space probe has been orbiting the Dwarf planet Ceres, the biggest little world in the asteroid belt, and during the last couple of weeks it has been spiralling downwards, into its science and mapping orbit. Long before Dawn arrived we new, from Hubble space telescope images, that there was a very unusual, bright, feature on the surface of this little mini-planet. But when Dawn arrived the mystery only deepened: the bright spot turned out to be far smaller, and far brighter than anyone had expected. Now the latest, amazing, images are down from Dawn, and do we have an answer?

No. Don't be silly.
Nature isn't giving up here secrets that easily. We can now see the structure of the bright spots, but we're no closer to understanding what weird kind of alien geology has produced them. In fact the mystery deepens: We can now see the bright spot is actually a cluster of scattered bright pots - and there are more, smaller, bright patches scattered across the surface! 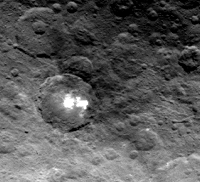 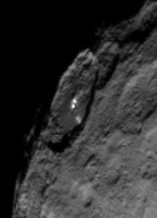 Above: The biggest bright spots, shown just as the Sun is rising on them and at around midday. We're beginning to see structure here, but still have no idea what it means. Courtesy of JPL/NASA/Unmannedspaceflight.com

The bright spots aren't the whole of the strange story though. Ceres has a number of enigmatic mountain like features. The one in the animation below definitely looks like it might be volcanic in origin, which would make it a marker of cryovoclanic (volcanoes that erupt melted ice instead of rock) activity - which in turn could tell us how long ago Ceres definitely had liquid water beneath its surface, and what the chances are that any remains today

The most intriguing suggestion I've heard so far is that, although Ceres is predicted to be ice rich, these bright spots are actually deposits of salt. That would make sense if Ceres had a salty, or other chemical, rich underground ocean . If it did then one sequence of events that might explain the bright patches could be as follows:

- Melting ice rose through the crust (i.e. 'cryovolcanism') via fractures caused by impacts or tectonic forces.

- Salty deposits were left behind along the fracturess as intrusive deposits,  and salt water  may have erupted onto the surface.

- Subsequent impacts and other erosion have cause exposed salts to fade over time.

- In a few cases an placed impact or landslide could expose some of the preserved deposits.

I've read people of a geological background proposing very similar explanations in a few places. Dr Tom McCord, a co-investigator on the Dawn mission, has gone on record at a Seattle astronomy event as saying he thinks these bright spots could be salt deposits. There's more on what he thinks Dawn is seeing here.
Posted by John Freeman at 00:18