The U.S. elections - what will they mean for space exploration?

Right now the U.S.A is deep into deciding who'll run it for the next four years. Since there are only two parties with any kind of shot at winning (Republicans and Democrats), and they have very different outlooks, it's likely that the winner will have an impact on NASA's activities.
Now, I'd love to say that NASA's just one space agency, let's not overreact, etc. And they are just one space agency. But they are by far the best funded and most active agency in the world, and in many respects a world leader in quality to. So, yes, who wins the U.S. power struggle is important to space exploration world wide.

What does a victory for either side mean for us space geeks? Thanks to my fellow space geeks over on NASAspaceflight.com, there are a few videos you can watch of some of the presidential candidates talking about spaceflight.

Ben Carson doesn't seem overly fussed about space exploration, but does mention that he feels 'not being in the space race' is bad for America (The relevant bit is around 4 minutes 20 seconds):

Ted Cruz is a known climate change denier, and would likely dismember NASA's Earth observation program. I don't understand how he has got to this position on the subject, but in other ways he seems quite pro NASA:


I feel I ought to say that Mr Trump seems a bit confused when it comes to space policy. Here he seems, well, indifferent (relevant bit about 38:40 in)...


.. and here he's passionately pledging to protect it...

However Mr Trump has often seemed to have only a vague idea of what his policies are in many areas - he often wins his debates on personality rather than anything substantial about running America (although he does win them, a lot, read into that what you will) - so perhaps hearing two different stories from him is not a surprise.

It's only really Hilary Clinton and Bernie Sanders in the running still - and I'm afraid I haven't been able to find anything much on video.

However I did unearth this clip from Hilary explaining how she was once spoken to disrespectfully in a letter from NASA:


Even so, material from her 2008 presidential campaign suggests she has some policy ideas, including:

However in 2016 it doesn't seem to be much of a talking point for her. What to read of her overall I'm not sure.... Vaguely friendly indifference? 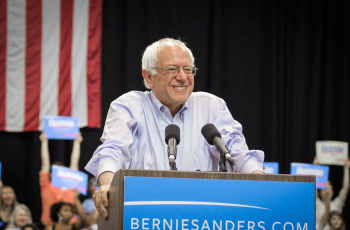 Sanders is worrying because in 1996, 2000, and 2012 he helped to decrease funding for NASA, and spending on space exploration. When asked about this at an during an Ask Me Anything (AMA) Reddit event in 2015 he said:

“Sometimes, and frankly I don’t remember all of those votes, one is put in a position of having to make very, very difficult choices about whether you vote to provide food for hungry kids or health care for people who have none and other programs....But, in general, I do support increasing funding for NASA."

Again the overall impression is a sort of tolerant indifference, a 'space, yeah, sure, so long as it won't cost too much' sort of attitude.
But that is the biggest worry of all -  not one of them has any passion for the subject, or treats it as having much signifcance. It seems the best we can hope for from any of them is that NASA doesn't get it's budget cut for some PR friendly (but pointless - NASA's whole budget is less than 0.5% of the U.S. Governments discretionary budget*) 'cost cutting'.

Perhaps, I'm too pessimistic, and there is some hope ; Personally I am of the opinion, for each candidate, that actions speak louder than words...but we shall see...

U.S. Military to present ideas based around British Skylon spaceplane design﻿
Posted by John Freeman at 09:25