Answers for students: Why are scientists and science teachers so obesessed with units?

This is the first in a series of posts designed to help students of all ages with the physics problems they most often often ask me about. 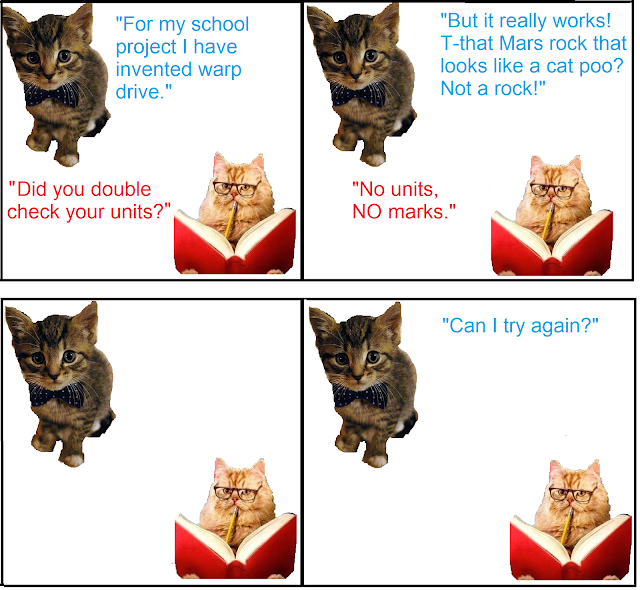 Have you ever felt like feeding your teacher a text book because, after spending hours pouring over the pointless physics problem they set, they gave you no marks – even though you got the answer right?

You literally just forgot to write down the units. The teacher knows what the units are, they wrote damn question! Hell, you should rip up and eat their favourite book, that'll show them.

Show them they've driven you insane, probably, but I've met students who seemed pretty close to that point.


If you haven’t ever felt like that…. congratulations! You either are a robot from the future, sent back in time to make everyone else feel bad about themselves*, or you have something to blackmail your physics teacher with. Something big I hope. Because I still make that mistake from time to time, and I have a freaking PhD in physics.


But... that said... there’re good reasons why you should make the effort to get the units right - not just in school but in life.

As an example: Imagine I asked you to buy me "a milk, just a milk, one milk - go, go, go, right now," from the shop down the road. Once you got there you'd find that ‘a milk’ could mean this….

You might be a bit surprised and upset, when you get back, to find I actually mean one of these:

You might ask ‘why has this idiot wasted my time, and sent me on a wild goose chase without telling me exactly what he wanted?’

You might be concerned that you were sharing a room with a madman who expected you to get highland cows from the corner shop.

And, If I then told you it was to demonstrate why you need to put units on your exam questions, you’d probably shout at me and throw the milk at my head**.

So it’s a good thing this is just happening in our imaginations.

But it is exactly why your teacher is being so pedantic about the units - because not putting in units has caused some very expensive misunderstandings: NASA once had a computer program give them information in kilometres when they expected it in miles, without putting 'km' after the numbers.

No-one wants to explain to their boss why they just blew a hole in the planet Mars (or, as a more realistic example, why the expensive door they ordered for the office is too big for its frame) so getting students to put the right units on things is just one of those life-skills teachers try to get you in the habit of doing.


So, while your teacher may or may not be mean, pedantic, dull, or weird smelling, give them a break on this one thing: Putting the right units after your answer really is worth the effort to do.

What units to use? Elephants would be cool, but elephants are frowned on as units of weight, length, or smell, because you have to feed them so much, take them for walks, and pay vet bills.

Although, if you're determined to use them as units, 1 elephant is probably equal to about 6 metric tons.

So in physics we mostly stick to the SI units system, which is a collection of units for basic things that can be used in combinations to cover most situations.

Below is a table of the S.I. units.  It's worth the time to learn them, even for things outside of Physics exams:


* That seems a very petty reason to actually go back in time but, if you are, I'm not going to complain about it. You might turn out to have a secondary mission to kill anyone who finds out about the first mission.

** If you actually turned up with a cow, which is very unlikely but not entirely impossible, I would call you 'Master'. Whether you wanted me to or not.

You've read our science facts - have you tried our science fiction? You can pick up our book on Kindle for 99p, or as a paperback, by following this link.
Posted by John Freeman at 10:25