The best images of planets beyond our solar system

The last ten years have been an amazing time: Growing up the idea of finding planets around other stars was mentioned to me in textbooks... at the very end, usually in the same very short chapter that mentioned ideas like space hotels, finding intelligent aliens, or building colonies on Mars.

And, now, we have found thousands of planets around other stars. Many of them are far stranger than my textbooks expected, which assumed we'd find that solar systems similar to our own. The reality has been that solar systems come in all kinds of exotic configurations. Those books thought we'd be finding these worlds with direct imaging, using massive telescopes - by and large we haven't: Almost all of them were found by indirect means, like watching for stars wobbling, planets occulting the stars they orbit, or gravitational lensing of the light from background stars*.

But not quite all: Although it's still very hard to do, some exo planets have been photographed directly by very, very large telescopes just like my textbooks expected. Below are some of the best. Think of them as a teaser for the future: These fuzzy points of light are what the next generation of telescopes will be improving on - and they're also actually images of something I thought I might never get to see.

Which is pretty damn cool... 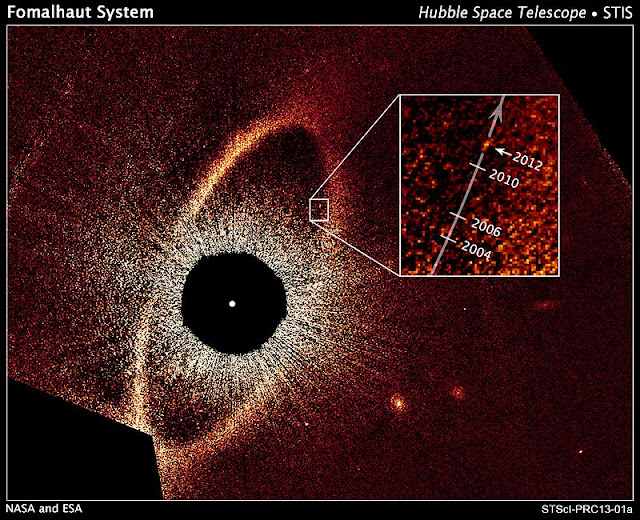 NASA Hubble Space Telescope has revealed this: A gigantic disk of debris surrounding the nearby star Fomalhaut. Circling it is a planet on an unusual elliptical orbit that carries it on a path straight through the debris - probably not great news for the planet itself. The planet, called Fomalhaut b, swings as close to its star as 4.6 billion miles, and the outermost point of its orbit is 27 billion miles away.
"We are shocked. This is not what we expected," said Paul Kalas of the University of California and the SETI Institute. They suspect that this is evidence of another planet gravitationally 'interacting' with Fomalhaut b. That's scientist code for 'having a huge fight which Formalhaut b lost', hence why this planet is on an orbit that exiles it to the far end of its solar system. . 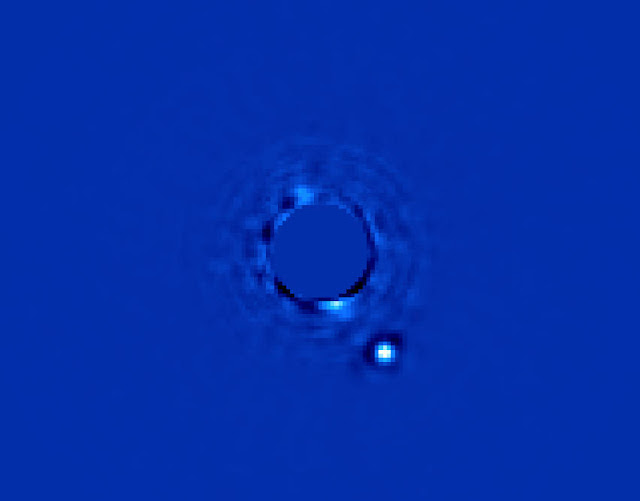 This image was taken by the Gemini Planet Imager (GPI) , and it shows a planet, beta Pictoris b, orbiting the star Beta Pictoris. Beta Pictoris b is a new born giant planet -- several times larger than Jupiter and just ten million years old. Its so young it's still glowing in infrared light from the heat released in its formation. The bright star Beta Pictoris is hidden behind a mask in the center of the image - the large blank circle. 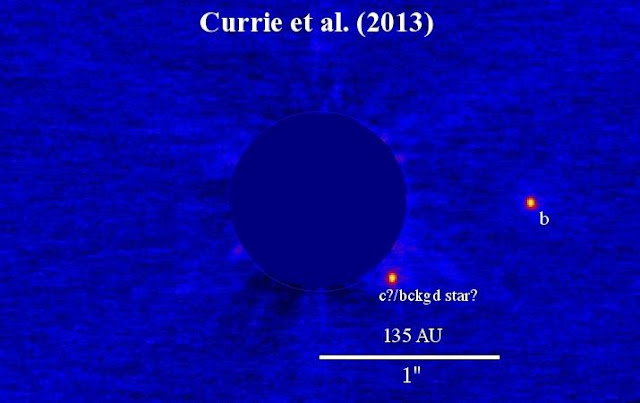 This possibly-planet has an estimated mass between 6 and 15 Jupiter masses. Exactly how much it weighs is important, because things lighter than 13 Jupiter masses can't generate enough pressure in their cores for nuclear fusion, and are definitely planets. Objects heavier than that can generate enough pressure in their cores for a brief burst of deuterium fusion (the weediest kind - true stars use hydrogen fusion) in their youth, which makes them 'brown dwarf' sub stars. Whichever side of that division it's on it's a bigger object than Jupiter, and like Beta Pictoris b it's young enough to still glow with heat from its birth.

An image of an exoplanet is rare, but videos of them are like diamond dust. The star HR 8799 is even rarer: It has not one but four planets big enough to be imaged from earth, andhere they are gently orbiting their primary. This time lapse video took seven years to make, with each frame being shot using at the W.M. Keck observatory in Hawaii. The black circle in the middle blocks the blinding light of the star, and thus make the planets visible. 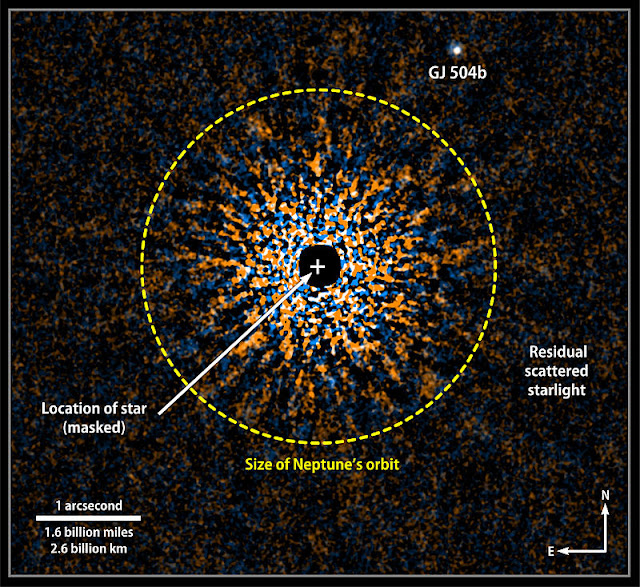 Several times the mass of Jupiter and similar in size, this new world, dubbed GJ 504b (what's with all the dull-ass names I wonder), is the lowest-mass planet ever detected around a star like the sun using direct imaging techniques. "If we could travel to this giant planet, we would see a world still glowing from the heat of its formation with a colour reminiscent of a dark cherry blossom, a dull magenta," said Michael McElwain, a member of the discovery team at NASA's Goddard Space Flight Center in Greenbelt, Md. "Our near-infrared camera reveals that its colour is much more blue than other imaged planets, which may indicate that its atmosphere has fewer clouds." 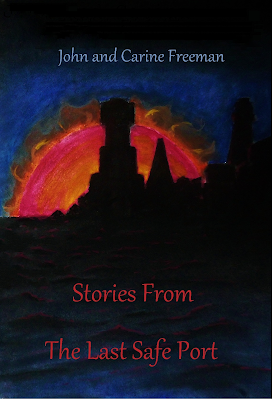