All links are numbered, and listed at the end.

Of tiny shrapnel, zombie stars, and out of place isotopes.

Science often needs three difficult traits: faith that what you’re doing is worthwhile, tenacity enough to convince others of this, and patience enough to see it through. It appears that Nicolas Dauphas[1] and his co-authors have proved that they’ve got the mettle. He and his team have just passed a tiny but significant milestone in an 8 year quest to shed more light on our solar systems earliest epoch [2], and explain why the concentrations of certain rare isotopes vary between the various planets and meteorites.
To do this needs a careful analysis of samples from the most unaltered type of meteorite, carbonaceous chondrites[3], and to give you an idea of just how painstaking this research has been; Dauphas began preparing samples of the Murchison[4] and Orgueil[5] meteorites, a pair of space rocks older than our Earth, in 2002. 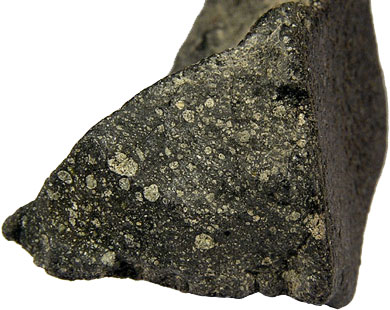 Image above: a section of the Murchison meteorite, showing white aluminium rich chondrules, some of the first solid objects ever to form in our solar system. Image courtesy of meteorites.com.

Science so long in the preparation can be a tense business when it finally gets going. Dauphas research was something that cosmochemists[6] have been wanting to try for over 20 years, but it was only relatively recently that the technology to do so became available. His aim was to use the California institute of technology ion microprobe[7] to very accurately measure the abundance of a particular isotope of chromium (Cr 54) in minute grains, or nanoparticles, embedded in the rock of the meteorites.

Image above: a pre-solar nanodiamond, less than 100 atoms across, imaged by high resolution TEM. The diamond is the pentagonal symmetric arrangement of atoms (seen as light and dark dots) near the middle of the image). Image courtesy of Washington University.

The right tool for the job...
The ion microprobe operates a bit like a combination of a microscopic sandblaster and sensitive nose: The sample being analysed is held in a high quality vacuum, and ‘sand blasted’ with a stream of energetic ions (electrically charged particles). This smashes a small section of the sample into plasma, a gas where the atoms are ionised. This ionised gas is then analysed by a mass spectrometer (the ‘nose’ part) which uses electric and magnetic fields to separate and identify the atoms present by their mass. Because it measures atoms by mass the ion microprobe can distinguish between different isotopes of a chemical element- something otherwise impossible as the chemical behaviour of isotopes of the same element is almost identical.
As the supply of material from suitably primitive meteorites is limited, the experiment so long in the preparation, and time on such an advanced and complex piece of kit so hard to come by a little bit of nerves on Dauphas part would be understandable: “ Time is very precious on those instruments, and three weeks of instrument time is very hard to come by” he said.
Dauphas used an electron microscope and the microprobe to search through minute grains, some only 0.0000001 meters (100 nanometers) across, looking for one with an excess of Cr54.

Dauphas is looking for a piece of shrapnel, a grain forged by the death of a ‘zombie’ star. Grains from supernova have been identified in the material brought to Earth by meteorites before, such as nanodiamonds[8], and grains of silicon carbide[9]. The proportions of rare isotopes of aluminium and iron (aluminium 26 and iron 60) they carry have bolstered the idea that our solar system was hit by a supernova around the time it began to form. The leading theory, the nebular hypothesis[10], on our solar systems origin suggest that this supernova explosion triggered the collapse of the pre-solar nebula (if you just thought ‘the what?’ go to the first entry on this blog and start reading). In a sense that explosion was the very start of year zero for our solar system.

But supernova come in different types[11]. True the type most people think of is simply the immense implosion ,then rebounding explosion, of a terrifyingly powerful star that makes our sun look like a pocket torch- type II, or core collapse supernova. But another type, type 1a, can occur when the super dense corpse of dead star attempts to reanimate itself; by ghoulishly tearing the flesh off a nearby companion and wearing it!

No I’m not joking! The situation starts with two stars orbiting each other: one of them dies in a relatively modest way, a planetary nebula. It leaves behind a corpse as big as Earth and as heavy as a full grown sun. This is the stars burnt out core, full of carbon and oxygen, known as a white dwarf[12]. This dwarf continues to orbit its companion, and under the right circumstances its intensely focused gravity (the dwarf is denser than only a few things known to science) strips material off its companion, and layers it onto itself. As the material builds up its mass, under the dwarfs crushing gravity, compresses the core of the dwarf until things there are hot and dense enough for nuclear fusion to begin again, this time using carbon as fuel, bringing the dead star snarling back to life!

Yet the attempt to revive itself is not only vain, it’s doomed to catastrophe: the dead star lacks the thermal pressure feed back mechanism[13] that living stars use to stabilise themselves, and the reaction goes runaway in only seconds- the temperature of the white dwarf goes up to billions of degrees Kelvin, and the white dwarf becomes an Earth sized thermonuclear bomb.
It is torn entirely apart: The intense pulse of radiation is followed by a demonic shockwave moving at 20,000 km per second, or 3% of light speed- awesome velocity for such a huge phenomena. This is known as a type 1a supernova, and in the brief moments it takes to happen, high energy nuclear alchemy produces rare isotopes, such as chromium 54 and calcium 48, in quantities that no other natural phenomena does.

Image above: A 1a supernova ignites in a distant galaxy. Image courtesy of the University of Toronto.

Back to labouring Dauphas and his sections of meteorite: Over three weeks, using the ion probe, he sifted through grains embedded in the meteorite samples (1500 in all!). In the first session his search began promisingly, with hints of the Cr54 excess he was seeking, but he had to search for a full three weeks, until he found one definitively rich in chromium 54. This makes it a possible candidate for a fragment made during a type Ia supernova. If he can confirm this he will have found proof that our star system was subjected to at least one type Ia explosion, and will have solved a mystery that has plagued cosmochemists: Different planets, and different meteorites, have different concentrations of Cr 54. If they all came from the same proto-planetary disk[14], which should have been well mixed, then they should all have the same amount.

But if Cr 54 was injected into the disk, by a type 1a supernova explosion, as minute fragments then the processes in the disk would have sorted them by size, concentrating them into the young objects in the proto-planetary disk– some which would eventually form the planets. The same processes would have left the rest of the disk depleted in Cr54, explaining the modern day difference in concentrations.
Confirming this fragments origin will mean searching for another rare isotope- this time of calcium, calcium 48, which is relatively easy to make in 1a blasts, and hard to make in type 2 blasts. If there is a lot of calcium 48 in this grain then Dauphas and his eight co-authors will have filled in a blank in the earliest chapter of our solar systems history- an academic feat worth showing eight years of passion, tenacity and patience for .