A light that cuts the primordial darkness.....

All links are numbered, and the web addresses listed in order at the end.

Mysteries in the dark:

A few weeks back I posted on the earliest days of the solar system, and how many details are unknown. In large part this is because star systems, that are still collapsing(or even yet to) out of the dust and gas clouds[1] that bear them, are visible only as a darkness against the background stars- a cloak of dust that no light can penetrate [2].
Well that changed this week, with the discovery of 'coreshine'[3]. Coreshine appears to be a common phenomena in dense molecular clouds across the galaxy. It is invisible to our limited human eyes, but abundantly clear to the infra red detectors aboared the SPITZER[4] space telescope.

Mysteries illuminated:
Coreshine is light scattered off of dust particles of a particular size- roughly 1 micron (millionth of a meter) across. Light can be a quirky phenomena: it will only reflect and scatter off of particles that exceed a minimum size. You can see why in the bath tub: pick up a sponge and dribble water into the full bath, the waves will reflect off the walls, and off a big bath toy. But if you put a small rubber duck in the bath then it wil bob up and down with the waves without affecting them very much. The dust in the icy black core of a cold molecular cloud is typically 0.1 microns or less- like the small duck it moves with light waves rather than reflecting them.
So seeing into the core of a pre-stellar cloud has a catch 22 problem- any light that is of the right wavelength to penetrate the outer layers is also just the right wavelength to go right through the core without stopping!

SPITZER picked up an unexpected glow in mid infra red light[5] (light with wavelengths of around 2 to 8 millionths of a meter)coming from a pre-stellar cloud 360 lightyears away, known by the catchy handle of L-183. There are many possible sources for such a glow, but none of the possibilities seemed to fit the bill. 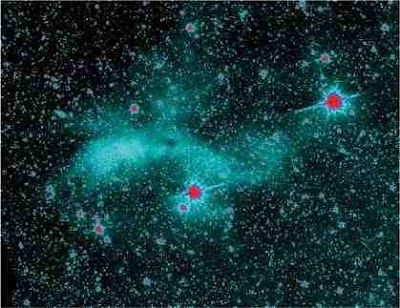 Image above: A false colour view of coreshine in L-183. Image courtesy of JPL,

Theory has suggested that dust grains in the cores of such clouds should be able to grow in size- and computer models of grains growing in thw densest regions of molecular clouds predicted that they would reach the right size to scatter mid infrared radiation, which is emitted by so many sources, incuding dust itself our galaxy is bathed in a gentle, continuos, glow of it.

SPITZER followed up this curious, and possibly fluke, find with a survey of 110 similar clouds[6] of dust and gas across the sky: the results left the investigateing team in no doubt that the effect is both real and widespread- half the clouds obsrved showed coreshine.

This is a very exciting find for scientists researching the earlyiest stages of star gestation. Illuminated by the galaxies ruddy mid infra red glow this larger, slowly growing[7], dust acts like dye droppered into the seemingly still water of a slowly flowing stream; suddenly complex structure is revealed where before only the streambed could be seen. Study of the spectrum[8] of scattered infra red light could reveal details about the conditions in the dark wombs of starbirth that were previously unguessable-not only SPITZER but the under-construction James Webb Space Telescope[9] to wil doubtless have a slew of coreshine projects to begin working through soon.
So watch this dust filled segment of space!

Image above: Some of the team working on the James Webb Space Telescope, in front of a ful sized model of the sattelite. Image courtesy of NASA.