An old friend visits a new (if very small) world...

I'd be remiss not to mention the continuing exploits of an old friend; A veteran space explorer with telescopes for eyes and a radio antenna for ears that started its journey aboared a [1]Delta 2 rocket and feeds of the Sun using solar cells.The good ship [2]Deep Impact is about to show us all how its done again.

Video above: The launch of Deep Impact in 2006. Courtesy of hackreik via YouTube.

This week sees the fly by of the Deep Impact space craft with comet [3]Hartley 2. In preparation the comet has been given the once over by both the [4]mighty Arecibo radio telescope and the [5]Hubble space telescope.
Hartley 2 is the smallest comet ever visited by a space craft at roughly a mile across, and observations from Arecibo radio telescope show it to be [6]almost peanut shaped.

Deep impact (re-christened [7]EPOXI for this new mission) will map its tightly curved surface and study the make up of gasses emitted by it.The mission has already thrown up [8]at least one surprise: The comets emission of the gas [9]cyanogen was seen to wax and then wane by five times its initial value, without any signs of a new pocket of gas being violently released. Outbursts, particularly of cyanogen, like these are usually accompanied with and increase in the amount of dust emitted by a comet, by this has not been seen. And Hartley 2, despite its small size, is throwing out as much water vapour as the much larger [10]Tempel 1, suggesting it surface is a cauldron of activity. 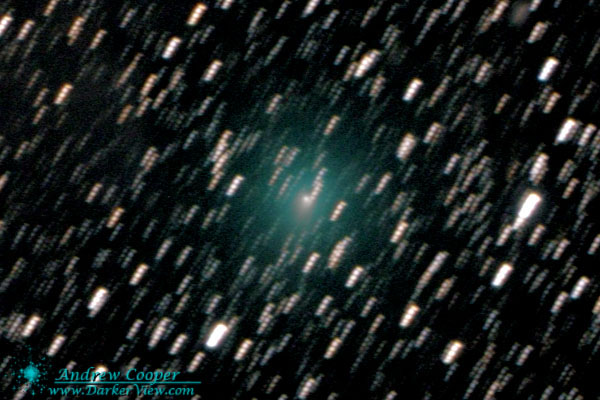 Image left: Comet Hartley 2 captured by an amateur astronomer. Image Courtesy of Andrew Cooper.
The various differences between comets, and the plethora of [11]surprises they keep flashing at science makes the exact origins of these wanderers form the deep dark of the outer solar system a [12]tantalising mystery. The current best model is that these are icy stragglers left behind by the great [13]protoplanetary disk that birthed our solar system. But the many and varied behaviors they show suggests that they may not all have the same origins.


Punters can [14]follow the mission on its blog, or if you prefer there will be a [15]u-stream lecture given by the comets discoverer tomorrow. Deep impacts first target was the comet Tempel 1 which was analysed in a unique fashion by blowing a hole in it with a huge copper projectile. Since then the probe has been moonlighting by [16]studying extrasolar planets, and now is set to fly past Hartley 2 at a distance of 700km on November the 4th. Hopefully the fly by will give us back here on Earth a better understanding of where this little wandered came from, how old it is and what is is made of. Emily Lakdewalla over at the Planetary Society has [17]a good write up on this, and their website includes [18]a timeline of what the long serving spacecraft will be doing and when!