A quick and dirty roundup.....

....of what I came away from the NASA/JPL press event on the Hartley 2 flyby with:

The comets jets seem to be powered by CO2, unlike any comet observed so far

The water signature goes up and down a little (tentatively, they aren't 100% sure on that data yet), suggesting some H2O involvement but by and large this comet is driven by dry ice. The comet is giving off water vaour but at a steady rate that does not go up and down with the amounts of dust given off (the CO2 emissions do) suggesting its not the main thing powereing the jets.

The dry ice activity seems to be mainly coming from one end of the comet (the one with all the clustered jets in the images released so far). 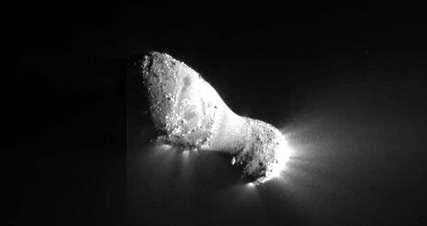 Image above: One of the close by mages of Hartley 2. The most active, apparently CO2 driven, vents are clearly visible at the far right end. The 'dusty' smooth patch in the middle resembles the asteroid Itokawa visited by [1]Hayabusa. The 'boulders'almost certainly aren't rock, and may be related to the jet activity! Image courtesy of JPL/NASA/UMD, via some processing by Hungryforinfo over on [2]unmannedspaceflight.com.

The 'boulders' littering the ends of the comet definately aren't rocks, they're probably not even very solid, and they don't yet know what they are or how they got there.

This comet definately has jets coming out of its night side, so there is some mechanism driving them even out of the suns heat. This has been hinted at in previous comet encounters, but this is the first solid confirmation. 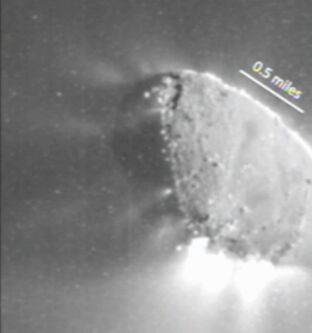 Image above: Enhanced image showing jets coming out of the comets night side.Image courtesy of JPL/NASA/UMD.
The IR spectral data has not yet been analysed, so they can't say much beyond the overabundance of CO2 in the jets about Hartley 2's composition.

The smooth mid section is likely caused by fairly fine dust particles filling a topographic low, resembling (it is thought) the [3]asteroid Itokawa. If the jets were oriented so that the comets spin were to increase it would likely snap at the neck around the one revolution every 3 to 4 hours mark.

Image above: Asteroid Itokawa, courtesy of [4]JAXA.
The comets rotation is not well understood, although it probably spins about its shortest axis.

Deep Impact travelled to Hartley 2 specifically to study a comet smaller than any that  had been looked at before. Comets are of interest because they supplied the raw materials for the cores of giant planets, and may well have been involved in bringing water and organic matter to Earth (I know that, and I've menioned it here  before, but it bears repeating).

Once again comet exploration throws science a basketfull of challenging surprises! I can't wait to hear some more detailed analysis, and especially the infra red spectral data on precisely what the comet is giving out. I'll leave it there for now, but I will endeavour to do a better presented and more detailed follow up post within the next week or so.

Today I have seen things no human being has seen before - so I'll tag today a good one, and go to bed smiling.