A double post this time: One of the big small body events from the past year and a plan from NASA that is right up my street!

Rosetta at asteroid Lutetia:
Deep into the darkness that no human and few machines have ever penetrated you wouldn't expect to run across a literal piece of home.  But you'd be wrong. 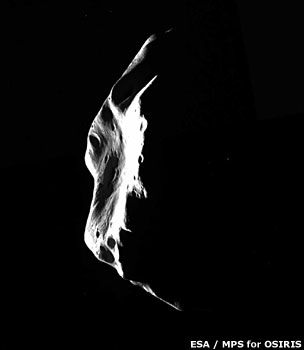 Image to the right: the enigmatic contours of Lutetia catch the distant sunlight. Courtesy of NASA/JPL.

In July 2010 the ESA space craft Rosetta [1] tore past the asteroid Lutetia at a distance of around 3000 km - a long way for a human but nothing for a space faring robot. As it did so it took images and spectra of this enigmatic 120km long boulder. Even its changes in speed as it passed by gave us information on this little worlds mass and density - Lutetia is denser than an ordinary stony chondrite meteorite [2], meaning it almost certainly is metal rich. Now scientist have had the chance to study the data beamed back and draw some conclusions: Lutetia may be a left over building block of the four terrestrial planets, Mercury, Venus Earth and Mars.
The Rosetta spacecraft observed the asteroid, which, when combined with telescopic observations from European Southern Observatory [3] New Technology Telescope gives us the most complete surface spectrum of an asteroid ever. The spectrum - the wavelengths of sunlight reflected and absorbed by the surface - gives us an idea of what an object is made of. Luetetias spectrum is very similar to a type of meteorite called estatic chondrites - these are thought to have formed close to the sun, making up the earliest Lego's from which planets like ours were born  Hence Lutetia may have been grown in the same place -  a piece of Earths own ancient history, stranded out of deep time [4].
Another revelation about Lutetia is that it may have once had enough internal heat - from internal radioactivity or left over accretion heat - to have had a warm core smouldering sullenly behind its rocky face. An incredible thing for a place so small its gravity cannot even squeeze it into a rough sphere.

Image above: The geological regions of Asteroid Lutetia. Image Courtesy of ESA.

The surface of Lutetia has been mapped into seven areas:  Baetica, Achaia, Etruria, Narbonensis, Noricum, Pannonia, and Raetia. Achaia and Noricum are truly ancient places; based on crater counting Achaia is nearly 4 billion years old.

Image right: A set of grooves on the Lutetian surface. Grooves like these are seen on many asteroids, but their exact origins are still a matter of debate.

The surface is studded by immense, monolithic blocks of impact ejects, blankets of solidified lava up to 600 meters thick, grooves [5] a hundred meters deep, and landslides creeping down crater walls under the low low gravity. Finding such an active geological history on a world so small is a treasure trove for planetary geologists. 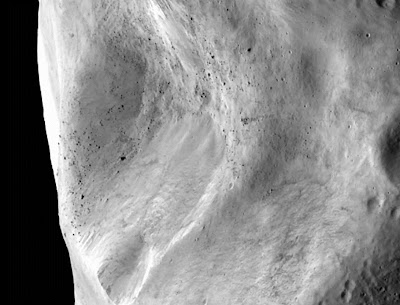 Image left: A huge landslide has slithered down onto the bottom of this crater in the Baetica region of Lutetia. Massive boulders on the overlooking slopes cast black shadows that are reduced to pinpricks by distance.

Why wasn't this massive rock incorporated into one of the main planets? Luck, and gravity. Lutetia probably had a gravitational slingshot [6] type close encounter with at least one major planet as they were growing, and ended up in the asteroid belt instead. Only 2% of asteroids in the belt are from the inner solar system, so scientists will be keeping Lutetia in their thoughts- a mission dedicated to Lutetia itself (Rosetta is on its way to meet comet Churyumov-Gerasimenko in 2014) could help shed light on the origin and earliest, most hidden, years of Earths existence.

Speaking of things that happened when Earth was still young: Check out this computer model of the titanic impact that pulverised the south pole of Vesta:

Video above: A computer model of a 50km wide asteroid smashing apart Vestas south pole. Courtesy of Martin Jutzi. First seen on The Planetary Society blog [7]. No protoplanets were harmed in the making of this video.

The big sphere is a primordial Vesta, and the little one is a 50 km wide impactor. However even the simulations authors admit they are a way from having an accurate handle on the impact yet. Eric Asphaug and Martin Jutzi who authored the model suggested there might be several reasons for this: the impact speed could have been lower than in the model, Vesta may have been harder, or there might have been effects that did not kick in until some time after the explosion that had more influence over the final shape.

Vesta it seems is proving difficult to interpret - it's uniqueness as a world surviving from the deep past and its unusual history makes it difficult to interpret. However a few tentative conclusions are being drawn: Vesta is differentiated like a planet for starters. For more on this follow the link above for the planetary society report, or go to the website for the 2011 American Geophysical Union meeting [8].