Well a year in fact. But that said a helluva lot has happened since I last got a chance to blog. I've deliberately left it until I've begun to have enough free time to make a decent commitment to it. I've had a thesis to write, small people shouting things like 'dada, come!' before jumping in muddy puddles, things like that. So, to get back into the groove, I'll start with a series of posts devoted to the biggest and most stunning ancient solar system developments of the last Earth orbit. As always a list of links is provided at the bottom of the post.
First up:

I wish, really wish, that I could get someone to play something suitably jaw dropping every time I hear that. Actually there are lots of jaw dropping bits of music out there, so here's a good one [1] - just imagine the music starts as Dawn leaves Earth orbit, then the Sun rises over Vesta's monumental impact scars as the string section really kicks in....On the July 16th of this year the ion engine [10]powered Dawn spacecraft [2] pulled into a survey orbit around the immense 400km bulk of asteroid Vesta. Alone with this devastate majesty it moved into a  high altitude mapping orbit (HAMO), and recently moved into a low altitude mapping orbit (LAMO). As soon as it arrived at this tortured and primordial place this sophisticated space faring machine began collecting images, scans, and data of all kinds [3] on its surface, its composition.... and its cataclysmic history.

Video above: An introduction to the Dawn probe. Courtesy of NASA/JPL.

This is a neat little video released shortly before Dawn pulled into orbit about its first lonely port of call, and it serves as a nice introduction to the mission. The next video snippet shows Vesta as Dawn closed with it: it's immediately an illustration of why Vestan history gets the description 'cataclysmic':

Video above: Dawn closes with the first target: Vesta. Courtesy of NASA/JPL.

The evolution of the images from fuzzy blob to (still fuzzy) monstrous space rock highlights one of Vestas main, primeaval, features: From this video we can see that the bottom 1/4 of the protoplanet [4] has been obliterated by a gigantic impact.

In fact it gets worse for Vesta:

Left: A false colour relief map of the south polar region of Vesta. Blue is lower, yellow/red is higher. Image courtesy of NASA.

Look at the two arcs of thrown up mountains making the rim - there are two distinct arcs. Each arc is the right size and shape to have been thrown up by a giant impact, which tells us that the Vestan south pole got blasted not once, but twice by smash ups with its brethren space rocks. These blasts made the Asteroid hit implicated in the dinosaur extinction [5] look seriously puny: Vesta had its entire south pole blasted apart and replaced with these giant basins and their mountains.
However this is a good explanation for one other mystery: How pieces of Vesta got launched into space and eventually arrived on Earth as meteorites! These are known as Howardite–Eucrite–Diogenite (HED) meteorites [6] and have long been suspected to be portions of Vesta's crust.

Image above: A fragment of the monomict eucrite Millbillillie which fell in October 1960 near Jundee Station, Wiluna district, Western Australia.  Today scientists agree that the source of the known eucrites is Asteroid 4 Vesta and its smaller companions, the Vestoids. Image courtesy of www.niger-meteorite-recon.de/en/meteorite_eucrite.htm


Dawn provides more evidence for these vast calamities from long before humankind looked to the sky, with pictures like these:

Image above: A view from Dawn of the face of Vesta, showing the destruction of its south pole and how the whole asteroid was forced into a new shape.

The above image shows, on the lower right, the crushed depression where Vesta should have a south pole. It also shows, on the lower left most visibly, grooves, steep walled, flat bottomed, that encircle the dead world like a grim garland.
There are two sets of grooves, one older, the other younger, and guess what? Their epicentres line up almost with the epicentres of the two giant impacts. These two titan events made the basaltic rock of Vesta ripple like waves on a pond and then settled into these strange new shapes.
The newest of these giant crater has been named Rheasilvia. But the discovery doesn't stop with the obvious Vestan wounds. Mysteries abound here:

Right: A close up shot of the Vestan surface. Notice how some craters show ejecta that is both light and dark -as though the impacts have broken into different layers of material.

The surface is splotchy in places, with odd light and inky dark patches that show little relief, as you would expect if they were related to craters or hills. And even amongst those that clearly are related to craters the mix of light an dark material is confusing - we'd have expected Vesta to be fairly homogeneous beneath the surface, but some craters that seem to have had landslides of light and dark material, as if Vesta were layered inside like a gobstopper.

Image above: A beautiful shot of a crater on the plains of Vesta, within which streams of light and dark rubble can be seen.

And going back to the abyss that was once the south pole: In its centre lies the giant central peak of the crater. Measuring tens of kilometres from base to peak it is one of the biggest mountains in the solar system:

Image above: A profile of the remains of the Vestan south pole. Courtesy of NASA/JPL.

There's so much in these pictures we don't understand. Some of these oddities are almost like a Vestan signature, unique to this giant amongst asteroids: Craters cut in half:

Image above: A Vestan crater that has been partly erased. Courtesy of NASA/JPL. 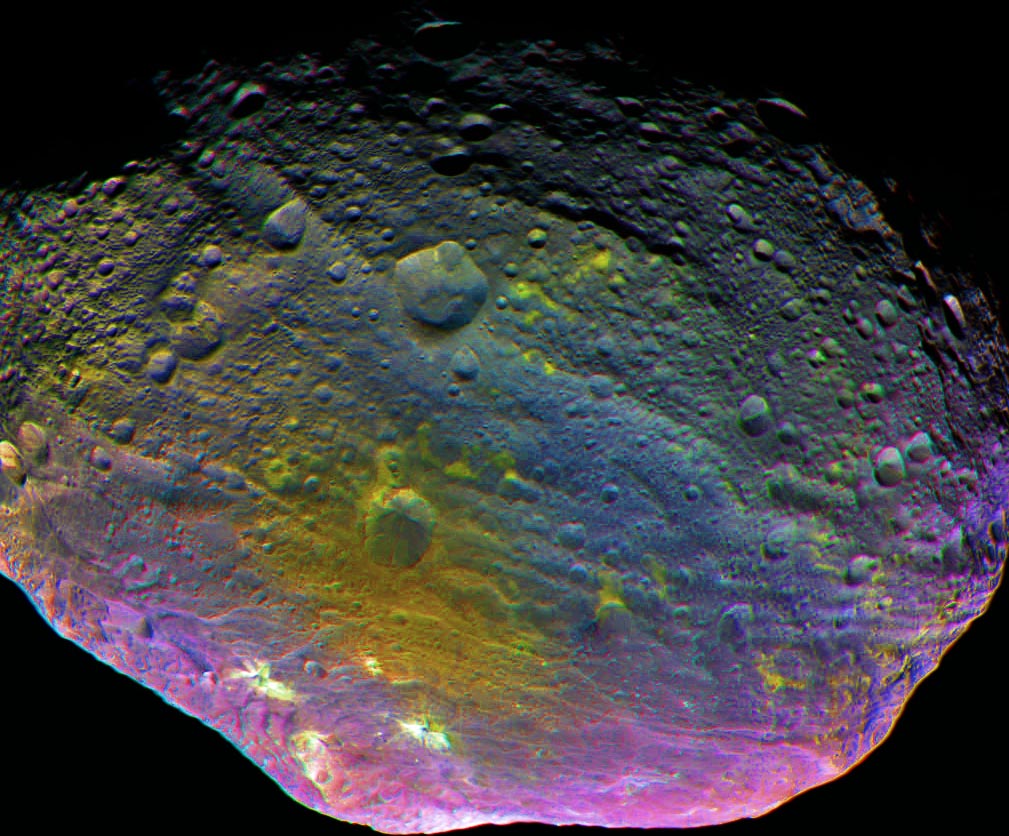 Image above: A false colour image of Vesta. Very subtle colour variations have been enhanced here to make variations in surface composition stand out. Courtesy of NASA/JPL.
It goes on and on.... You'd think Dawn would have its own blog wouldn't you? Well it does[7]! And to round off this frankly inadequate introduction to Dawn and Vesta here is a conference presenting the finding from the team themselves... enjoy!

Video above: Science briefing by the Dawn team.Courtesy of JPL/NASA.

And this is not the end of Dawn and her teams mission into the deep mysteries of the asteroid belt: Dawn will be the first spacecraft to visit the dwarf planet Ceres [8], a world suggested to have once had a subsurface ocean [9], and hints of activity over its south pole. That will be a whole new voyage in to the unknown.........