Looking for water in the desert....

Unless you live in a hermetical sealed box, at the bottom of the ocean*, you'll have at least caught a hint that NASA has something big in the works: Sunday is the day that the car sized 'Curiosity' [1] Mars rover lands at Gale crater.

Now, several people at work have ask me: "How's it going to detect life then?"

To which I reply with inarticulate spluttering, but what those splutterings mean is : It's not.

This mission is actually to investigate a world that's been gone for a very, very long time - that we know had a thick atmosphere, and water [2]. That world is the Mars of three and a half billion years ago. Curiosity is going to Gale crater to investigate that Mars, to see if it might have been an environment habitable to life.

They key to that is what's inside Gale crater [3]: Image above: An artists impression of Gale crater, based on data from ESA's Mars Express orbiter, NASA's Mars Reconnaissance Orbiter, and the Viking Orbiter. all the heights are times two. They say it's to 'help visualise' things, which means 'because it looks cooler' when I run it through my science speak translatomatic. Image courtesy of NASA/ESA.

Gale is ninety six kilometre wide hole in the Martian crust, formed by a huge asteroid impact three and a half billion years ago. Doesn't sound very friendly, no?

But - based on what the small fleet of probes orbiting Mars can see - Gale crater flooded after it formed, forming a crater lake. The bottom of the lake silted up, and over time, as conditions changed, later layers - both water formed and airborne - have recorded the changes in the Martian environment. Image above: A map of gale crater, showing heights as colours - you can see that the mountain is higher than much of the crater rim, which shouldn't happen if it is a normal centre-of -crater-mountain. The white ellipse is the landing zone for Curiosity. Image courtesy of  Cornell University.

OK, but we can tell from orbit that that happened in lots of places [4] on Mars. So why Gale?

In the centre of the crater is mount Sharp. Now, it's not unusual for impact craters to have a central mountain -  the rock literally runs like water [5] under the blast, so it does this.....

Video above: A super slow-mo of a water droplet hitting a water surface. Look at what the 'crater' formed in the water surface by the droplet does: It rebounds into a central column. If you could freeze the water, just at that moment, you'd have something  exactly like the crater-and-central-peak formation of an impact crater -  the only difference** is that the impact crater does effectively freeze at this point. because the incredibly extreme conditions of the moment of impact fade away.

But Mount Sharp isn't a rebounding rock formation: In fact, Mount Sharp is a bit of a mystery [6]. For one thing it's higher than the rim of the crater - look at the water droplet video again: The peak material that gets that hight, breaks off at the tip.Scale that up, and you can see that the peak would never have got above a certain height.The edges of the crater could have eroded away, but we have other anomalies. For example: The mountain is made of layers [7] - rebound peaks don't form layers. In fact, those bands are important.

They're what Curiosity is travelling to see...

Image above: The layers on the side of Mount Sharp. A layer cake mountain is generally a sign of geology worth taking a peak at. Geddit? Peak/peek? Well I thought it was funny. A bit funny, anyway. Image courtesy of NASA.

Orbiting probes can get some idea [8] of what the materials making Mount Sharp are. The crater floor and lower slopes have phyllosilicates (clay minerals) which almost certainly formed in the presence of liquid water. The mid level slopes have signs of sulfates. Sulfates often mean waters that are acidic [9]. Then the peak is made of a layer of material that seems to have never seen water. Image above: Some of those layers, as seen from orbit by the HiRISE camera aboard the Mars Reconnaissance Orbiter spaceship. Image courtesy of NASA/JPL.

Which fits with what we know of ancient Mars - we think the planet may have begun with bodies of water that were fairly PH neutral, and benign. This was the time that the clays formed, and if there is any evidence of life supporting chemistry, it should be found there.

Then the planets internal dynamo - its liquid metal core - shut down, for reasons we don't entirely get [13]. This caused the magnetic field to dim, and the solar wind to start eating away [10] at the planets atmosphere. The crust broke open, and massive plumes of magma [11] shouldered their way up out of the dying core. They erupted onto the surface, forming gigantic volcanoes, like Olympus Mons. 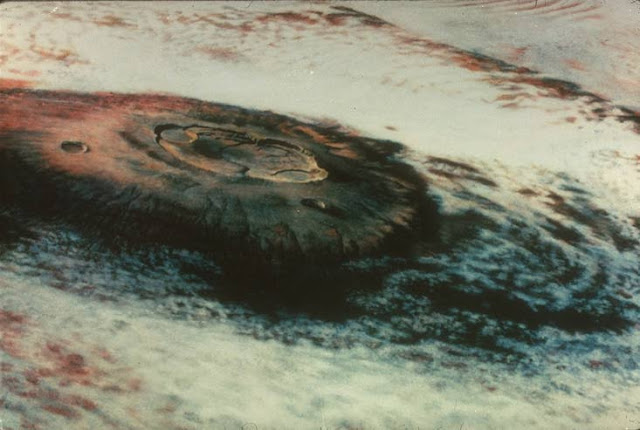 Image above: Olympus Mons, surrounded by clouds of water ice. The volcano is the biggest in the solar system. It got that big because the crust on Mars doesn't move about, so a volcano can keep growing and growing, as long as its magma supply is steady. Looks like a big cowpat, doesn't it? Image courtesy of NASA.

The resulting environmental collapse turned much of the Martian waters into diluted acid [12] . But acidic water is still water, and the sediments would still have piled up. So the sediments from these watery epochs formed the first layer of infill.

Eventually the magnetic field died away totally. The atmosphere thinned out. Wind erosion carved out the dried sediments around the crater edge, forming the base of Sharp in the middle. Then the climate shifted (staying dry) and wind began piling stuff into the crater, burying it completely. The wind action then reversed, as the climate shifted yet again, removing the stuff around the rim of the crater again, leaving the mountain sticking out of the middle.

Finally, judging by the patterns on the crater floor, there might have been a last phase of liquid water - it's hard to form large amounts of liquid water on modern Mars, but not impossible. A last gasp of magma for example, rising under a buried ice deposit, would do it. 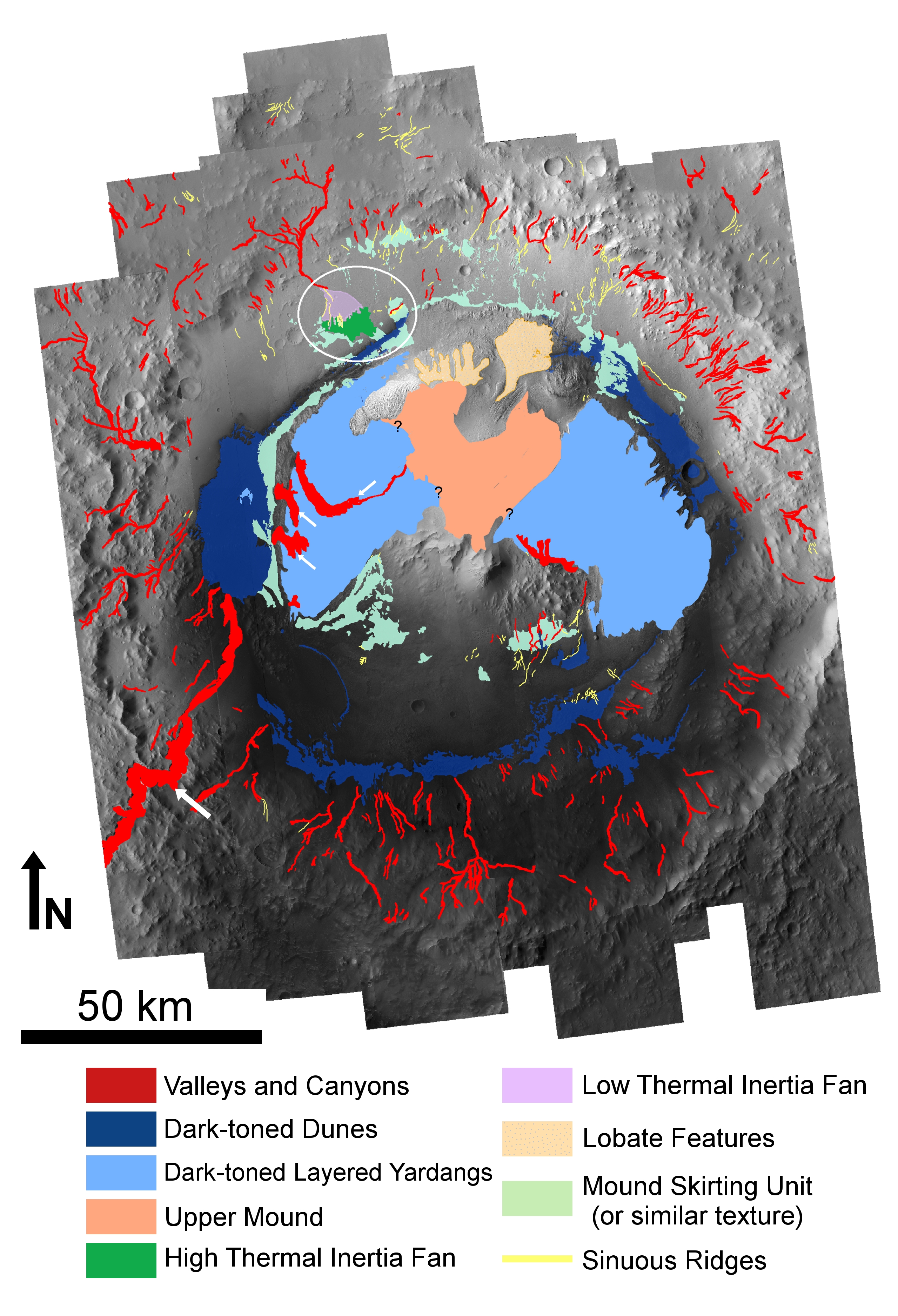 Image above: Another map of Gale crater, showing some of the geological features. Notice the Valley and canyons running down the crater walls? they're a good sign that water was flowing into the crater at one point. The dark green 'fan' could be a brief splash of water from more modern times, which is why the landing zone is right over it. Image courtesy of marsjournal.org.

That's the theory - Curiosity will test it.

So Curiosity is just another step along the road to finding the answers about life on Mars. One step at a time Ladies and Gents - if we rush things, we'll make mistakes...

* In fact, since you are reading this, your box clearly has the internet, and you've probably  heard anyway.


** Aside from the impact crater being a squillion times bigger, forming at thousands of degrees Celsius, forming out of molten rock not water, and the heat pulse from the water droplet doesn't incinerate a whole continent, the waves from the droplet aren't three hundred meters high as they hit the shore, and astronomers don't sometimes wake up at three in the morning in a cold sweat because of water droplets.