Dream chaser team refuses to give up the fight:

The Sierra Nevada corporation is pushing ahead with the development of two of its Dreamchaser spacecraft, despite loosing out to SpaceX and Boeing in a recent bid to ship supplies to the International Space Station. They are working on the atmospheric Engineering Test Article (ETA) for the sub-orbital / micro satellite launching Dreamchaser, and its partner Lockheed Martin are hard at work on an orbital version of the miniature space plane.
Mark. N. Sirangelo, Sierra Nevada Corporations VP said: “The SNC team is readying the ETA in order to begin the second phase of atmospheric flight testing early next year and our strategic partner, Lockheed Martin, is leveraging best practises in tooling and composites to manufacture the first orbital Dream Chaser spacecraft. Both efforts have been ongoing simultaneously and we are very pleased with the progress to date....Upon completion, the Dream Chaser orbital vehicle will be the most advanced composite structure ever built. We look forward to Dream Chaser becoming the world leader in this area and to its first orbital flight”


Above: A video presentation from SNC, showing the Dreamchaser orbital vehicle concept.

The LEAG is a body put together by NASA to "support NASA in providing analysis of scientific, technical, commercial, and operational issues in support of lunar exploration objectives and of their implications for lunar architecture planning and activity prioritisation." In other words they're the bit of NASA who thinks about the why, how, and who of exploring, and doing research on, the Moon. Mars is the big sexy in space exploration right now, but the Moon is also has a lot of mysteries and a lot to teach us so it's worth staying abreast of it's exploration (if you're a space geek like me anyway) -  especially with some of the first private missions set to land there in the next couple of years.

The LEAG's annual meeting will start in the next couple of weeks. Follow the link in the section title for the agenda with abstracts, or if that doesn't work you can try this one. A couple of the most interesting looking papers that caught my eye were:

New and evolving views of the Moons volatiles

Is the Moons atmosphere significantly thicker than we thought?


Russian engineers to launch micro-sat to see if Apollo Moon landings were real:

I'm being cautious about how accurate this report is, but it's too intriguing not to share:
Were the Apollo landings faked? Well if anyone can be counted on to call NASA out if they were it's Russia, and a team of Russian engineers are planning to send a tiny spacecraft to the Apollo landing sites to see if they're real. I don't usually rate conspiracy theories - sometimes they're true but it's rare and usually dumb luck when a real conspiracy is found - but if the Moon-landings-were-faked theory leads to a real Moon mission to visit the Apollo sites then I'm happy to watch and listen to what it finds - it'll be a great look at a piece of Mankind's history in space!
"All the points have already been made on both sides," project lead Vitaly Egorov told Russia Today. "Some claim they did not fly, others claim they did. No-one can actually convince each other and I got bored with listening. So I thought guys, let’s just fly there and have a look. The flag isn’t going anywhere. Let’s stop wasting time on the internet and have a look ourselves."

Above: The news report from Russia Today.


What have we discovered about Ceres so far?


There isn't anything new exactly in this video from NASA, but a lot of detail about Ceres that you might have missed if you're just following the occasional news reports that surface. It's a full blown lecture though, so make yourself comfortable and put a cup of tea (tea is not compulsory, that's just my British anachronisms coming through).


A weird little hint about Charon....

A lot has been speculated about Charon's 'mountain with a moat', and it's still a mystery. But science journalist Corey Powell has made an observation that has set a few brains to ticking: On the images of Charon there's a feature near the moated mountain that looks like, well, just the moat! Maybe there's something in this and maybe not, but if it turns out that Charon's mountains are sinking into it's core then you heard it hear first! 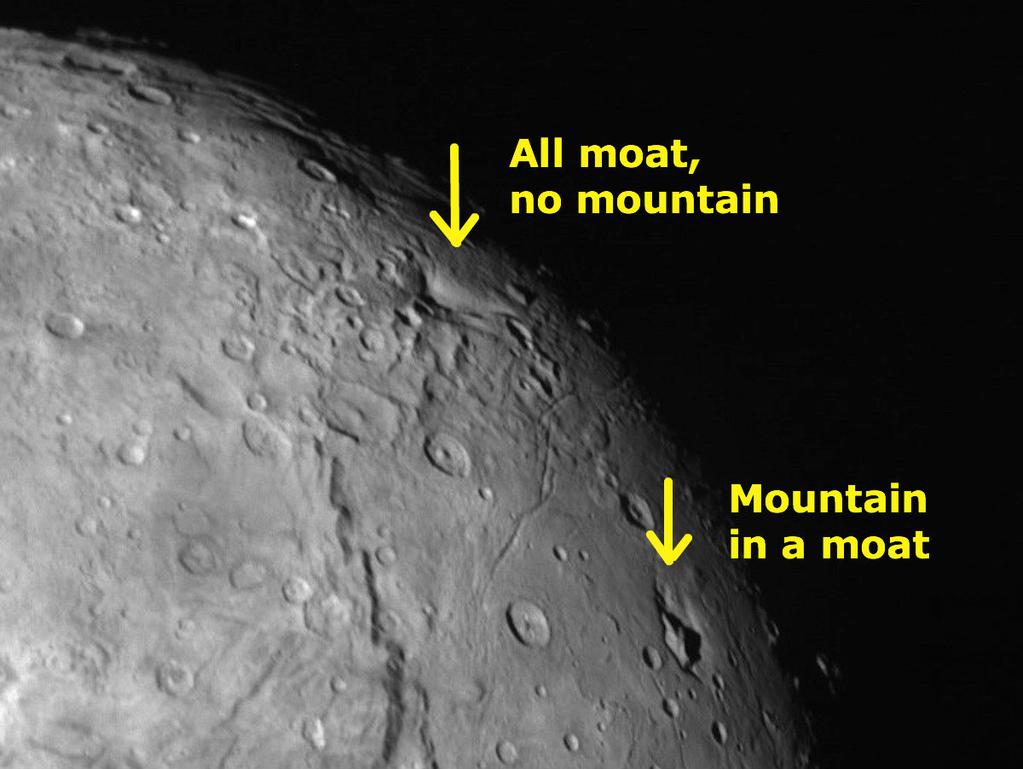