Russian satellite acts strangely and approaches other space craft, and do we live at the start of galactic history?

Do we live at the start of galactic history?

Here's an unusual, and humbling, thought: what if we're one of the first intelligent life forms to arise in the universe? the odds of that have probably gone u p slightly, after a study using the Hubble Space Telescope (title link) suggests that Earth is, relatively speaking, one of the first habitable planets to emerge in our universe.
"There is enough remaining material [after the big bang] to produce even more planets in the future, in the Milky Way and beyond," said Molly Peeples, who worked on the project. IBEX explores the edge of our solar system


IBEX stands for Interstellar Boundary EXplorer. It's a space telescope (of an unusual sort) that has spent the last seven years quietly mapping the boundary between our solar system and interstellar space. Now, that might sound like (literally) a whole lot of nothing, but both the space in our solar system is full of subtle things like electrically charged gas, magnetic fields, radiation, fast moving particles, and dust from supernova. I've not heard much from it for a while, but this week the science team have published a staggering 14 papers all at once, outlining what they've learnt about interstellar space from the mission. The papers are here (link) and there's a nice explanation of IBEX below.

ESA is a fairly small and low budget space agency compared to NASA - it's yearly budget is usually in 3 billion dollar mark, compared to NASA's 18 billion or over. So it's good to know that the work it does and the missions it launches still attract enough attention to persuade new members to join it: Estonia (a country in northern Europe, for those whose geography isn't so great) has joined the agency as it's newest member.

On a slightly more worrying note about space politics, some alarm bells were rung recently when a Russian space satellite placed itself between two satellites owned by the Intelsat group. At one point the Russian spacecraft, whose real designation is unknown, came to within ten thousand meters of one of the Intelsat vessels.
In space terms that's right in Intelsat's face - if something came that close to the International Space Station the crew would start doing collision avoidance manoeuvres. Ivan Moiseyev, head of Russia's Space Policy Institute, said to the BBC that the craft "....is simply a relay satellite, sending signals from spacecraft to Earth, for example from the International Space Station (ISS) - we have communications problems there - and from one satellite to another". Russia's RIA Novosti news agency quoted him as saying. "Any satellite can make some clumsy manoeuvres - but collisions are extremely rare."


Would radiation have killed Matt Damon in 'The Martian'?

No, is the short answer. But the long answer is rather more interesting, going into how lucky the film's characters were not to be caught by a solar storm, how the camp on the martian surface was a relatively radiation safe place, and how space radiation can damage someones health - well worth a read.


Opportunity looks out over Endeavour crater:

No science or story to this, just an amazing picture taken by the Opportunity Mars rover, looking out from it's current location over the massive Endeavour crater. Made from 3  navcam images, by Jan van Driel of unmannedspaceflight.com. 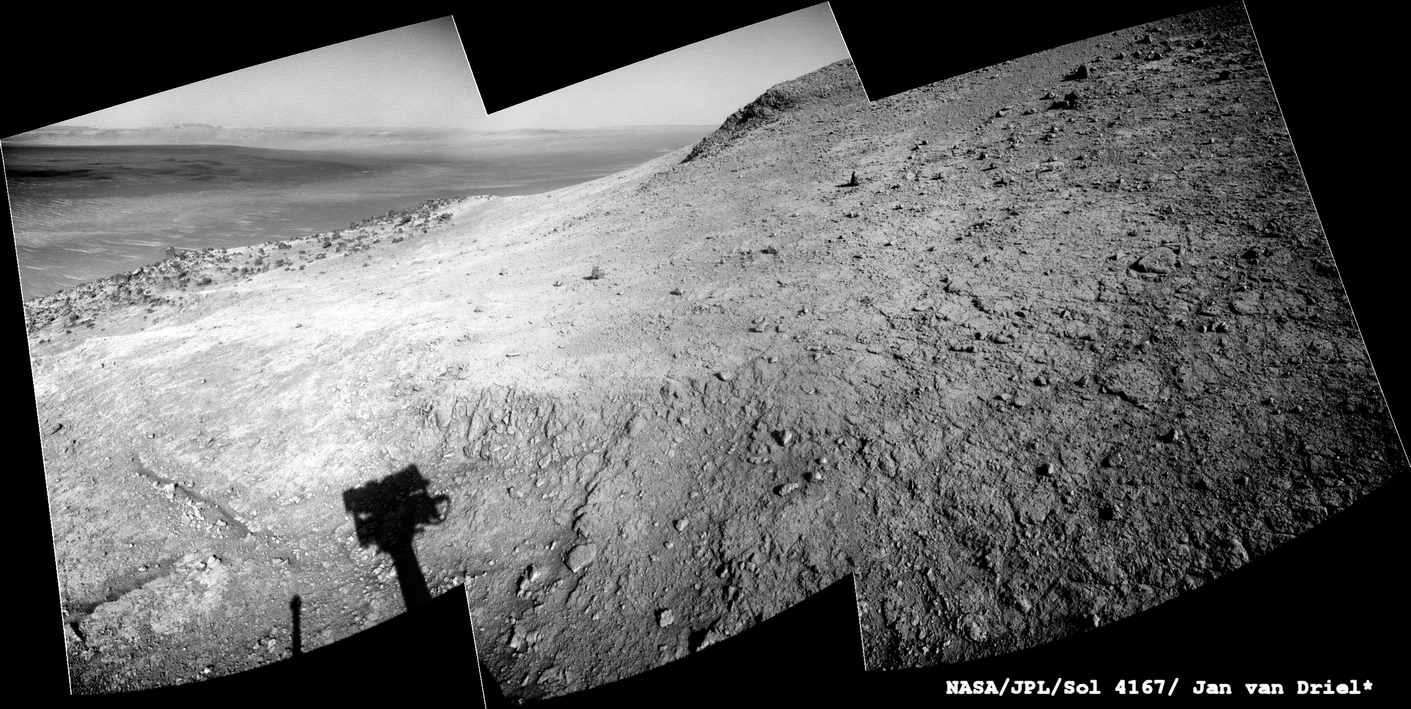