If you've enjoyed this please share it on facebook, twitter, or  your favourite social media.
Edit: I apologise for the ongoing formatting bug, I hope it doesn't spoil things to much - I'm working on it!

This weeks other big space conference: The 2015 American Society for Gravitational and Space Research conference

A lot of news has been coming out of the Division of Planetary Science conference his week - lots of discoveries from our far flung probes across the solar system. But there's been another space conference going on this week: The American society for Gravity and Space Research.
Unlike DPS this isn't about exploring other worlds: Its focussed on how we use the space environment, and microgravity, to do experiments that couldn't be done, or would be very difficult to do, on Earth. Things like growing protein crystals, or studying how certain types of fluid/solid mix behave are popular, as are experiments on micro organisms. These have led to some surprising results over the years - discovering novel mechanisms of enhanced virulence, or vaccines for diseases like salmonella - and the journal Nature even has a special webpage for biological microgravity science, So ASGSR is worth the time to check out - exploring space is amazing, but the things we use space as a resource for can be just as interesting - and can even save lives

Above: A quick video showing off the combustion rack on the ISS, where microgravity is used to learn more about how fire works. Courtesy of NASA/ESA.

You can find live webcasts of some of the events here.

Yesterday there were series of talks run by TEDx and ESA, covering topics from AI to cooking in space. Yes, I should have reported this earlier when we could have all signed up for the livestream, but the talks have been recorded and should be made available to view soon enough. In the meantime the website (title link) alone is worth checking out - there're plenty of thinks to interest you on there! TED and ESA are putting together events like this to bring together like minded people who want technology to have a positive influence over the future of humanity - which brings me onto some of the videos from the event (I'll let you all know as soon as the talks are available): Firstly how to 3D print an actual Moonbase:

..and secondly how 3D printers are being made to use space worthy materials...

Although the legal side of space exploration is more 'Star Bores' that Star Wars it is important, and a law just voted in by the US could have far reaching impacts: The the U.S. Commercial Space Launch Competitiveness Act is aimed at supporting the fledgling commercial spaceflight industry in the US. Some of it's major points are:

Martian moon is being torn apart

For a long time the weird series of parallel grooves running across the surface of the Martian moon Phobos have been a mystery: Criss crossing the tiny world's entire surface, suggestions for their origin have ranged from shockwaves caused by a huge impact, to flying strings of debris thrown out from Mars by asteroid strikes. But now it seems the truth might be more deadly: The gravity of Mars is slowly ripping the moon apart, and the grooves are the fractures caused by the process.

On Earth meteorites hit or atmosphere and (mostly!) burn up, leaving nothing but a a brief streak of light in the sky. Mercury doesn't have the benefit of much of an atmosphere, so meteorite storms smash straight into the surface without so much as pausing. Data from the (now finished) MESSENGER mission to Mercury has been released, showing just what happens during such a meteor storm - and it seems that the meteor storm itself can make a significant contribution to what little atmosphere Mercury has.

A quasar is one of the most terrifying and fascinating things in the universe: A super massive black hole, greedily sucking down an entire galaxy. As the torn up gasses, stars and planets swirl around the black hole's entrance they collide at phenomenal speeds, causing the whole mess to heat up hugely in a lightshow that can literally be seen across the Universe. And now astronomers have discovered two that are about to collide. "The result will be an enormous release of energy, roughly equivalent to millions of supernovae, in the form of gravitational waves," Matthew Graham of the California Institute of Technology told Phys.org.

United Launch Alliance's road map for the future of the space economy:

Over the last few days the ULA has been posting infographics on Twitter (title link) of how they hope Earth's in-space economy will grow. The first is where we are today... 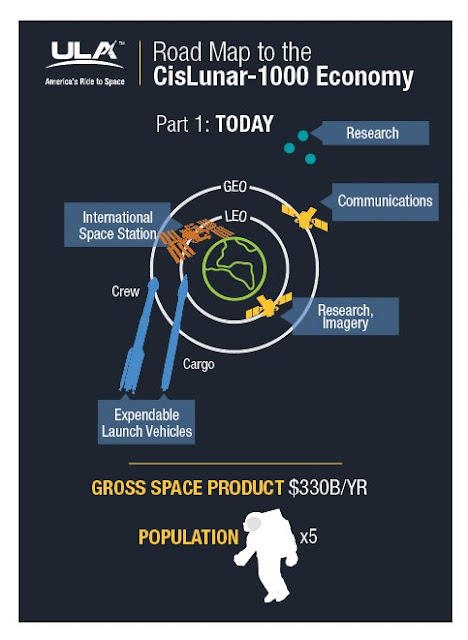 ...the second is where they think we could be in five years... 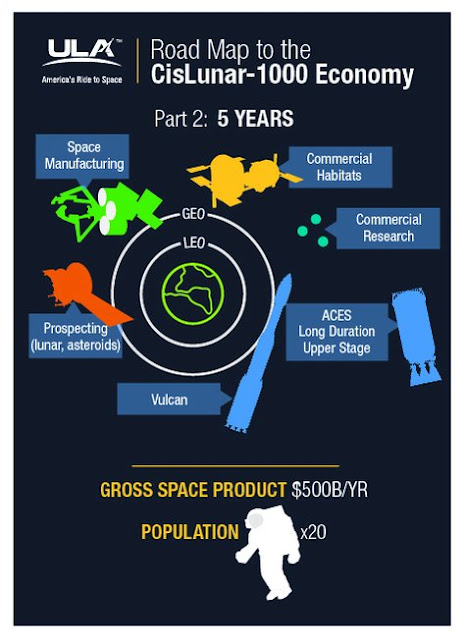 ...the third takes us to fifteen years... 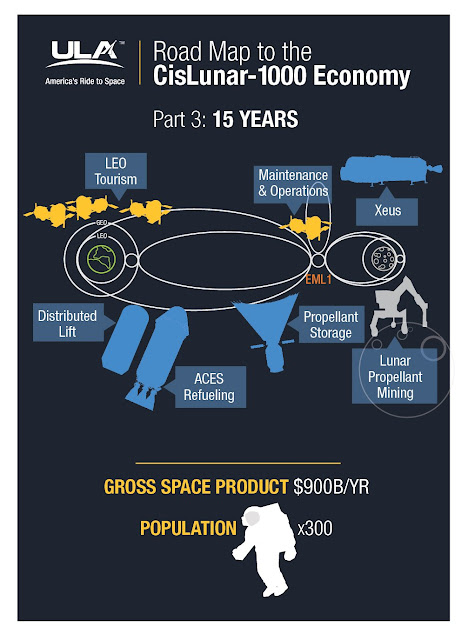 ... and the last takes us to thirty years out, with a population of a thousand people living and working in space, and a space economy with an annual worth of nearly three trillion dollars a year.. 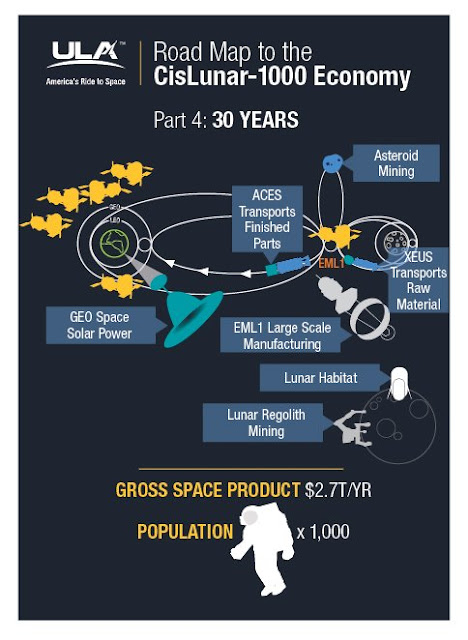 Will their vision come to pass? Well one of the things about setting goals is that you should always be aiming high - if you're not then you probably won't hit your full potential. Whether or not what ULA hope for comes true... well, let me put it like this: I'm thirty two, and over my life the space economy has grown only slowly, and manned spaceflight has stayed restricted to a very few people on government funded space stations.

Will that change? I don't know. But I like the way ULA are thinking about the future of mankind in space.
Posted by John Freeman at 03:40