An ice giant planet, in the twilight....

First up, some quick news bites:

Asteroid 2012 LZ1, which passed Earth [1] not ten days ago, has turned out to be twice as big as previously thought, and half as bright. What threw off estimates of its size was its dark surface: Astronomers assumed that it was reflecting an about average amount of light for an asteroid. So, surface brightness and distance being equal, a big rock will look brighter than a small one, and they estimated 2012 LZ1 was 500 meters wide.

In fact it was reflecting a below average amount of sunlight, and was really 1000 meters wide. Sneaky!

Image above: The asteroid that hid in plain sight, 2012 LZ1. Image courtesy of USRA.

We know about this thanks to the Arecibo radio observatory [2]. Arecibo can 'probe' a passing object with radio waves. What it does is similar to a RADAR, but more subtle than just getting a 'ping'. I refer you to Emily Lakdawalla of the Planetary Society for a further explanation of how images can be made using radio waves [3].

The unusually dark surface probably points to this being a carbon rich chunk of four and a bit billion year old rock. That means a 1 kilometre wide chunk of fairly unaltered material from the very beginning of the solar system - and there it goes, sailing off into the black... oh well...

Although if it had hit us, for a lot of us, its exact size and type would have been academic. By which I mean that millions would have been cooked by the blast, and wouldn't care just how big 2012 LZ1 was.

But it missed us and, thanks to the Arecibo observations, we know it's no danger to Earth for at least 700 years. So.... that's all OK. Just remember, when you go to the polls: One day one of them won't miss. And funding for science and space exploration is what might give us the tools to do something about it.

Nu-STAR stretches, gets ready for the job ahead:

Remember Nu-STAR [4], the space satellite with the revolutionary X-ray optics? No? Really?
Fair enough, I once forgot that American mains power is different to British mains power, and blew up a very, very, expensive computer. As a side note: The bang deafened my firms managing director in one ear for twelve hours..... so I didn't get away with that one.

Image above: An artists impression of Nu-STAR, big boom extended to catch images of the biggest X-ray bangs in the universe. Image courtesy of NASA/JPL/Caltech.

Nu-STAR is a micro-satellite - a fridge sized satellite -  with a remarkable X-ray imaging system, part of which needs to be extended away from the main craft on a long unfolding boom. The satellites mission is to provide unprecedentedly sharp X-ray images, of some of the most violent events in the universe, such as black holes and the aftermath of supernova. After a successful launch, the next big hurdle for the Nu-STAR team was getting the boom unfurled.

In a turn of events that is wonderful, but lacking in Hollywood style drama: They have successfully unfurled the boom [23]. Well done to the whole Nu-STAR team!

Portrait of an ice giant:

Out near the edge of our solar system lies a strange, cold, collection of worlds: The Uranian system.

Yes: The system centred around Uranus. Anybody want to make that very, very, tired joke?

Go ahead, I'll make a cup of tea while you get it out of the way.

While I'm slurping my tea like an old granny, consider this: The planet, that has amused generations of school kids, has also been inspiring great art ever since its discovery. Just listen to the music it has inspired down the ages:

Video above: Uranus Rock, by Jimi Hendrix. Say 'Who?' and I'll cry. Seriously.

Video above: 'Oblivion' by Uranus explodes. Yes, they're a metal band, which means mosh pits, crowd surfing, and that the bands name is almost certainly meant to be interpreted that way. Incidentally, never be in the front of a Motorhead gig if Lemme decides to go crowd surfing. Learn from my mistakes folks.

.....to....this where you need to remember: Music is patterned sound, and your brain is a genius at finding patterns.
Here's the music:

Video above: Uranus sings into space. The random EM frequencies coming from the planet and its rings sound like music to the human ear.  That's.... wonderful. Weird. The reason I love this sciency stuff. Planets sing into the eternal night, and some people claim science robs us of a sense of wonder. Go figure. Track from Symphonies of the Planets vol.4 - Rings of Uranus" NASA Voyager Recordings. Images courtesy of NASA/JPL..

The planet Urtanus didn't inspire it.

The planet Uranus performed it.

The Voyager 2 probe [5] carried an instrument called the Radio Astronomy Investigation instrument [6]. It recorded the various frequencies of radio waves, emitted by the worlds it passed, for future study. The 'sounds' of solar storms [7] hitting planetary magnetic fields [8], the emissions of magnetosphere's, the fluxes of ionised particles following curved field lines, and hitting atmospheres, or ring systems...
....and these are the 'sounds', the radio wave songs, of the Uranian system.

The man who recognised the planet as a planet, William Herschel in 1781 [9], was inspired to try naming it 'Georgium Sidus' (George's planet). A planet named George wasn't popular (beyond King George who Herschel was trying to honour), so the name Uranus was proposed instead, and stuck.

The closest of the ice giant planets was probably quite indifferent to all this, as it never comes closer to Earth than two and a half billion kilometres. The gulf is so vast that only one spacecraft has ever been there, and that was Voyager 2, in January 1986.Voyager taught us that this system doesn't give up its secrets easily. It gave us most of what we do know about this twilight collection of worlds, but the short time it had there was barely enough to scratch the surface.

Voyager found an huge, inscrutable, planet. A gravitational linchpin for a complex system of rings and moons, all with their own personalities.
. 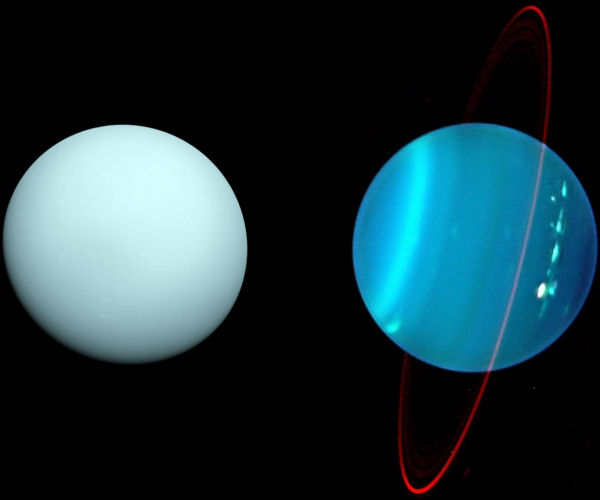 Proposed missions back there, like the Uranus Pathfinder [10], have been knocked back. mainly this is due to the time, money, and technical difficulties of reaching such a distant target. Conventional engines will only allow a ship to flyby Uranus, unless it takes a very very slow route, due to the weight of fuel it would need to carry.

All is not lost for exploring this strange realm further though: Over the years our sensors on and near Earth have improved. High end telescopes, from Keck [11] to Hubble, have scrutinized the baffling blue orb [12], and slowly, when added to the Voyager data, some of the mysteries have begun to unravel:

Image above: the Keck observatory, one of the 'eyes' that let humanity explore the parts of the universe we can't physically reach, at dusk. image courtesy of NASA.

Uranus itself is thought to be a thing of ice, with a rock core, surrounded by an atmosphere of hydrogen and helium. As the pressure grows, beneath the clouds, the atmosphere gradually changes into an ocean of liquid gasses with no definite surface. Mixed into its atmosphere are water, ammonia, methane (which makes it blue), and hydrocarbons formed by UV light hitting the methane. The winds howl around the planet at up to 900km an hour, and massive storms occasionally dance around its atmosphere.

Seen from afar Uranus seems like a mad parody of the other giant planets: The whole planet spins tilted violently to one side, almost at right angles to it's own orbit, and like Venus spins west to east. The magnetic poles are nowhere near the actual poles for some reason, which is probably related to the planet being sideways. And, because of the extreme tilt, the poles get twenty years of night in the winter, and twenty years of day in the summer.

The histories of both the ice giants -  Uranus and Neptune - are surrounded in question marks: Computer modelling of the suns protoplanetary disk shows that a world like Uranus couldn't have formed where it is today -  according to the leading theory of giant planet growth, the core accretion model [13], Uranus would simply run out of building material before it reached its present mass.

And, obviously, it didn't. Unless it's hollow. Which is incredibly unlikely. I'm a scientist, so I have to say 'incredibly unlikely' rather than 'impossible'. That's almost part of the job description, along with bad pay and putting up with occasional explosions and electric shocks....

Another model, the disk instability model [14], acts faster, but isn't as widely accepted. These differing theories give different internal structures: Core accretion predicts an Earth sized chunk of rock at the core, but disk instability lets them grow without such a 'seed' in the middle..

Or did they simply form elsewhere, and move home later in life?  Luckily scientist love a good theoretical argument. But not as much as they love being able to find out who's right using evidence. If you're reading this NASA, ESA, or JAXA, hint hint....

The planet is encircled by thirteen rings, a dark cousin of Saturns bright halo. Uranus has rings that are almost black, and their chemical composition is an unknown. The best candidate for what composes them are of chunks of water ice, contaminated by radiation altered carbon compounds (think ice with asphalt and tar frozen into it). The theory is that these chunks are debris from a collision between two small moons, around 600 million years ago. Image above: A map of the Uranian ring system, incuding some of the small, asteroid like, moons. Imnage courtesy of Wikimedia commons.

How the rings are kept in place is also a mystery. Saturns rings have tiny Shepherd moons [22], that tug the ring particles into their places. But only one pair of shepherds has been found at Uranus.

There are five major moons, swinging around the blue central orb. Named for characters from the plays and poems of Shakespeare and Alexander Pope, these distant worlds of ice and rock share the extreme seasons of Uranus, and have complex histories and unknowns of their own.

Chaotic Miranda [15], a jigsaw of randomly assembled landscapes, like it was smashed to pieces and then squashed the remains back together....

Image above: A photo-mosaic of Miranda, made from shots taken by Voyager 2 as it flew past. Image courtesy of JPL/NASA.

Ariel [16], with ancient cratered sliced up by scarps and canyons, indicating the most recent geological activity of the five large moons...

Image above: Ariel, as seen by Voyager at its closest approach. The rift valley-like features may indicate that Ariel had internal activity, driven by tidal heating, more recently than the other moons. Image courtesy  of JPL/NASA.

Image above: A re-processed image of Umbriel. Re-processing courtesy of Ted Stryk. The white feature on the 'top' is actually on the equator, and this view is almost straight down onto the south pole. No idea what it is. A crater? A giant crash landed iced doughnut? Probably a crater, but feel free to correct me. Image courtesy of NASA/JPL.

Image above: The pockmarked face of Titania. The queen of the fairies would not be flattered methinks.... Image courtesy of JPL/NASA.

Image above: The Uranian moon Oberon, with its ruddy tint. Image courtesy of JPL/NASA.

I'm sure you can guess my opinion..... I think we should be going back, if only to hear the rings singing again.... Image above: As it left Uranus Voyager 2 took this picture, looking abck towards its sunlit crescent/ Image courtesy of NASA/JPL.