This yellow-white star is on its last stellar legs: It's about to leave the main sequence [3] stage, the part of a stars life where it fuses hydrogen to shine, and bloat out into a huge red giant. Then it will throw off its outer layers, and becoming a planetary nebula with a tiny, heavy, white dwarf [4] in the centre. 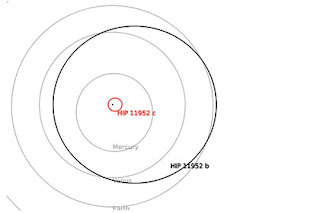 Image right: The ancient HIP11952 system as compared to our own solar system. Image courtesy of exoplanet.hanno-rein.de

But the two planets discovered going around it...... they shouldn't be there. The age of their sun makes them much too old!
More ancient than our own 4.75 billion year old solar system, which obviously I think is pretty impressive.
These are impossibly ancient worlds, according to the leading theories of planet formation:
HIP 11952 can be dated by how much 'metal' it has (in astrophysics terms 'metals' are any element heavier than helium, which shows you that brilliant minds should still look in a dictionary sometimes, but anyway....), and the heavier 'metal' elements grew later, in the runaway nuclear reactions of supernova explosions [5].

The planets should be the same age as the star, which is (drum roll): 13 billion years old. So the whole star system formed at a time when the universe was too 'metal' poor to form planets - or so we thought:

Image above: The relative sizes of our local planets, and the two incredibly ancient planets orbiting HIP 11952. Don't you wanna tell them: 'Hey, stop hogging all the old' ? No? Oh dear, it's just me then.... Image courtesy of exoplanet.hanno-rein.de

The key idea behind those long odds is the 'core accretion model' [6] of giant planet growth: When planets are forming, from a protoplanetary disk around their star, the 'metals' condense to form solids at a much lower temperature than hydrogen and helium. The metals are thought to form massive solid cores, which have enough gravity to suck down gas  from the surrounding protoplanetary disk and form gas giants.

Our exoplanet observations (we live in a time when it's possible to detect, and even see, planets around other stars - how cool is that?) show us that statistically it is much more likely to find planets around a metal rich sun. Yet the existence of these fossil worlds might point in a different direction for giant planet formation, a theory called the 'disk instability model' [7]. In this version the giant planets spontaneously grow out of the swirling gas of the protoplanetary disk.
In fact we have a spaceship on its way to our own gas giant, Jupiter (the JUNO [8] mission), that is heavily outfitted to investigated the inner working of Jupiter, via gravity measurements, and determine if Jupiter does have such a dense core.

Video above: A hugely informative rundown of the huge JUNO mission to the huge planet Jupiter. The video itself isn't hugely long though. And it's computer screen sized, which isn't huge unless you're desperately trying to compensate for something with your PC..... Video courtesy of NASA.

These two aren't the only  unexpectedly ancient worlds to have been found.
In 2003 a candidate for a giant planet, in a system 5,600 light years away, was identified by the Hubble.
The locale for this one is pretty weird corner of space: The giant planet orbits a pair of ancient stellar corpses, one a 'skinned' helium white dwarf [9], the other a spinning neutron star -  a pulsar [10].

Yes, I said the white dwarf has been skinned by something. M4's a rough neighbourhood, no joking.

Astronomers worked out the effect of the white dwarf on the pulsars rotation, and then backtracked from that to show that something was affecting the motions of both of them. That something was shown to have the mass of bout two and a half Jupiters, definitely in the planet, as opposed to brown dwarf [13], range. The whole system is part of the nearby globular cluster [11] 'M4', a hive of a hundred thousand ancient suns.

Video above: The Hubble Space Telescope observations of the M4 globular cluster, followed by a CGI impression of the strange, cthonic, star system it has found lurking there. Image courtesy of  NASA, Lynn Barranger (STScI), and Greg Bacon (STScI)

The scenario put forward to explain this planet is that it probably formed around some star a bit tamer than the pulsar, and was stolen via a massive game of gravitational billiards. That's pretty rare in our part of the galaxy, but amongst the teeming red giants and stellar copses of M4 such thievery is probably quite common.
Even though the planet is probably an interloper in its current home, the chances are very good that it still formed within M4. That means around a metal poor, ancient, sun. So, once again, its existence is hard to explain with the core accretion theory. 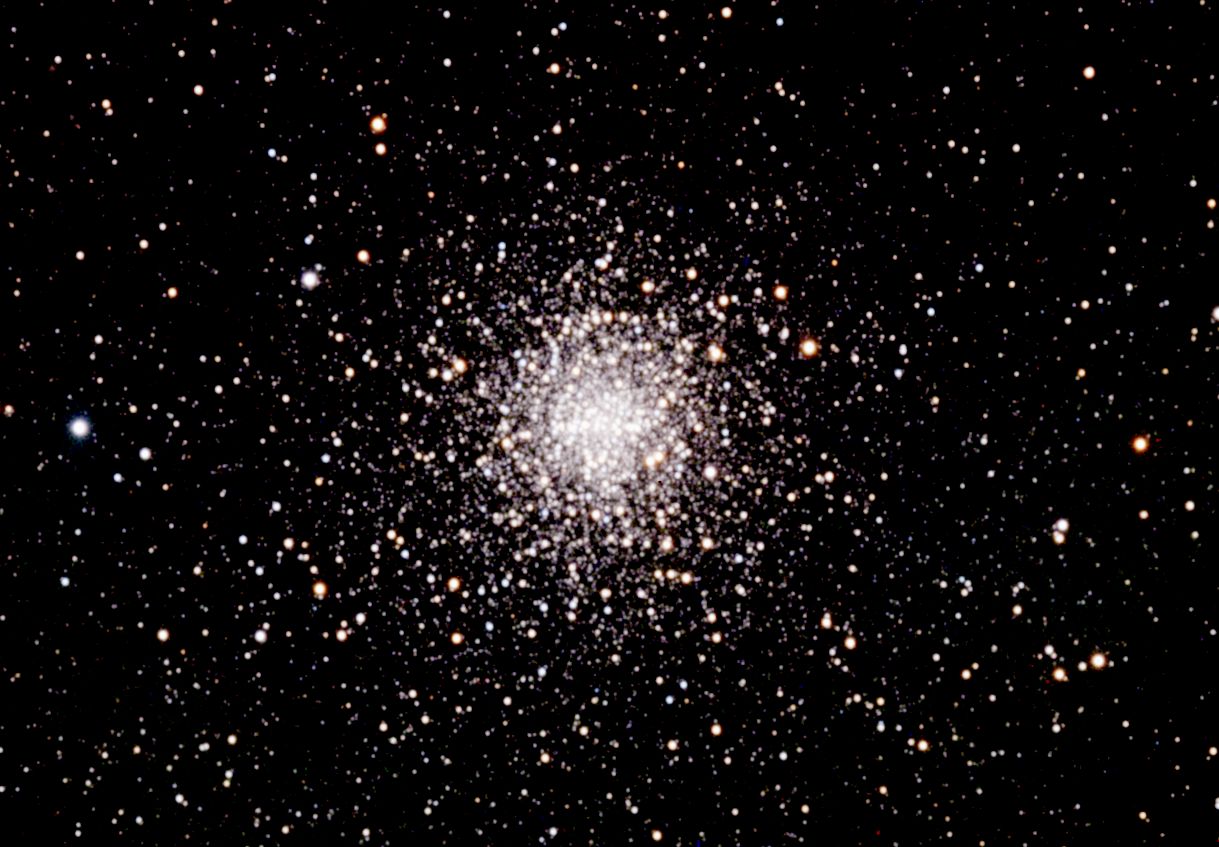 The teeming suns near the core of  M4. Unseen in there, but definitely having an influence on the motion of the visible stars, are black holes, neutron stars, white dwarfs, and blue stragglers [12]. Credit: NASA/STScI/WikiSky

Our current theories of planet formation have a lot going for them, and so probably aren't totally wrong. But science is an ongoing thing, and theories are supposed to get revised, and improved, as more evidence comes in. It's a never ending effort to reach a goal that may well be forever just beyond our reach; the absolute truth. Which is something that I wish more people, inside and outside the scientific community, would wrap their heads around.

These, utterly old, planets are pointing us towards improving our theory of how our own solar system came to be.
We just need to be smart enough to follow the signposts.