Worlds beyond the edge of knowledge: The Steppenwolf.

Today's post combines something I've wanted to talk about for a while with some latest news, so it's a bit longer than usual. If you want to skip straight to the bit about there being billions of rouge planets in the galaxy, and some of them travelling at enormous speeds into intergalactic space, skip to where it says 'Steppenwolf'.

On Thursday I asked: What's this then?

Odd looking, I'd say. But, more accurately: It's the inside of a very small planet!﻿

Video above: Some of the latest data from the Geoflow 2 experiment, on the International Space Station. Courtesy of NASA/ESA.

This shifting pattern is data from an experiment on the International Space Station [1], called Geoflow 2 [2]. It is literally a re-creation of the mantle of an Earth sized planet, only possible in microgravity conditions.

The experiment consists of two spinning spheres, one inside the other. The inner one represents the core, and the outer the crust. In between them is a fluid that stands in for the mantle. The whole thing has simulated gravity, via a strong electric field.

Image right: The ISS.Yep, they really do do things up there besides float around! Although, floating is cool enough to have some mileage in it. Image courtesy of NASA/JPL.

Doing something like this wouldn't work on Earth, because real gravity would pull everything in one direction. And this is just one of the many brilliant experiments going on on the ISS. There are investigations into the physics of fire [3], fluid flow [4], testing new technologies and materials for space satellites, studying the Earths atmosphere, studying particles from deep space [5]...... Follow the links, and find out just how much good science is actually being done there.

Or did you think they just waited for the Space Olympics [6] to come around?

Video above: A droplet of fuel burns in a way never seen on Earth, under microgravity conditions, in an ISS experiment. Video courtesy of Space.com.


The biggest telescope ever: 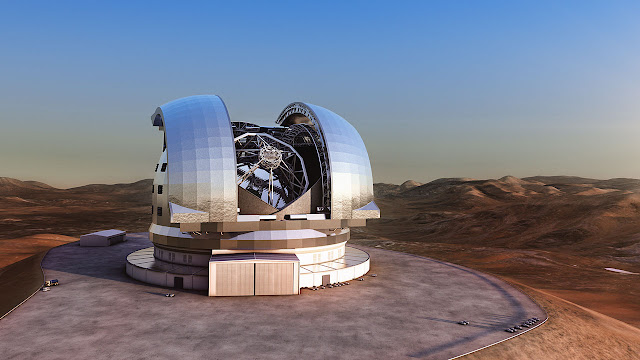 The European Southern Observatory [7] is building a monstrous telescope, with a main mirror forty meters across. Aptly named the European Extremely Large Telescope, the mirrors will have the latest adaptive optics [8] system. This bit of wizardry changes the mirrors shape thousands of times a second, cancelling out distortion from the Earths atmosphere, giving clarity of image almost as good as a space telescope.
Far bigger than anything we're likely to field in space (for the foreseeable future), it will collect more light, and be able to resolve smaller, fainter, further objects..

What's the point of a telescope as wide as a 737 jet is long? Well, if you're a James Bond villain then you could point it at the Sun and turn it into a solar death ray machine:

Image above:The solar powered 'Icarus' death ray from James Bond. But the bad guy didn't actually laugh maniacally as he fired it. I would have.... Image courtesy of Pinewood Studios.

But for those of us.... ahem, technically that's 'all of you'..... who don't wake up going 'Mwhahahahahah':
This beast will be able to take a picture of an Earth sized planet going around another star. It will be able to see the first stars ever to shine in the universe. Point it at a Bok globule [9], or Proplyd [10], and you might actually catch the signs of worlds growing  before your eyes. Or at least your ultra sensitive CCD imaging device.

The E-ELT will cost something like a thousand million euros, will be ready in the early twenty twenties, and be based near the already existing Paranal observatory in Chile.

I've just gone into my shed and looked at my 7 inch refractor. Suddenly I'm feeling insecure....telescope envy, anyone?

The Italian Remanzacco Observatory [11] has recorded the close approach to Earth of asteroid 2012 LZ1, and made the footage available online:


Video above: 2012 LZ1 near its closest approach. Video courtesy of the Remanzacco Observatory.

The unusually bright space rock only came as close as five and a bit million kilometers, although it still gets the designation 'Potentially Hazardous Asteroid'. However, as far as we can tell, 2012 LZ1 has no plans to come crashing through your kitchen ceiling at 25 kilometres per second. Although it has declined to be interviewed on the subject........
For an overview of what we know about the visitor, head over to the Minor Planets Center [12].

Steppenwolf:
I've been meaning to write about this for a while:
A theoretical study [13] by the Kavli Institute for Particle Astrophysics and Cosmology suggests an upper limit of a hundred thousand wandering planets, sometimes called Steppenwolf planets [14],  for every star in our galaxy.

This isn't just theory though. Astronomers have found evidence [25], using 'microlensing [15]', for a few wandering planets already. The rouges so far found are giant planets, lying between Earth and the centre of our galaxy, but the idea of Earth sized worlds being out there is also gaining credibility from the findings.   .
.

Image above: A graphic of the way that wandering planets can distort the light from a distant star. Image courtesy of NASA Astrobiology magazine.

Which leads to the question: What kind of worlds might be out in the dark, and how did they get  there?

The answer to the first part is, obviously, 'Cold'. Without a nearby star to warm them these worlds will only have whatever heat they kept from their birth, and whatever the decay of radioactive isotopes [16] in their cores doles out.

But therein lies a get-out clause! The surface of Earth is mostly Sun warmed. Yet in places it's intensely hot due to internal heat - those pleasant spots called 'volcanoes'.  So, might a wandering rocky planet have volcanic oasis beneath the ice that probably covers most of its surface?
We know of microbes, and even worms [17], that live absurdly deep beneath surface of Earth. And even that might be a conservative way to get habitable conditions: A paper published in Nature [18] has calculated that a hugely thick hydrogen atmosphere could hold enough heat to keep water liquid at a planets surface, even without a sun.
Wandering Jupiter sized worlds would probably be be a lot like the giant planets in our solar system. After all, Jupiter puts out as much heat as it receives from the Sun, and then some; The core of Jupiter is thought to be up to thirty five thousand degrees Celsius. So, since Jupiter has a powerful internal heat source, a Jovian Steppenwolf might stay toasty warm inside for billions of years.

How warm these wanderers could be is up for grabs. But it's a good bet: These worlds wouldn't be  frozen chunks of dead ice.

Image above: The Hubble Space Telescopes view of Pluto, and it's three largest moons. The ex-planet has been suggested to retain enough heat for a liquid water layer near its core. Could Pluto be a model for low mass wandering planets? Image courtesy of ESA/NASA.

OK, so they might not be totally dead places. But how did they get so far into the dark in the first place?

Jupiter sized and fatter planets could have formed as loners, in a similar fashion to a star, from a scrap of molecular cloud. The existence of Brown Dwarfs [19] -  objects part way between star and gas giant planet - gives this idea some weight, but the micro lensing studies I mentioned earlier found too many to be easily accounted for this way.

However a starless planet doesn't need to have formed on its lonesome. Image above: The Pleiades open cluster, a collection of close packed young stars still clinging to the remnants of the gas clouds that birthed them. In such a cluster close encounters between stars, and so planet stealing , are probably common. Ever seen two year olds fight over a toy? Image courtesy of NASA/ESA/AURA/Caltech

The other method to get a wandering planet is for it to lose a gravitational argument with something, and be thrown out of its home star system. This idea isn't as far fetched as it sounds. In fact it's thought to have happened in our own solar system [20]. The physics of this are akin to a gravitational slingshot manoeuvre [21], which you may have heard about (or not, I am very nerdy), but with bigger participants.

It's not an either/or thing: A planet could get thrown into any number of strange orbits. But undoubtedly some worlds do go to their suns fire, or the icy deeps of space.

Video above: This is what happen to a comet when it hits the Sun. So multiply that by about a million for a planet hitting its star. Video courtesy of NASA/JPL

So, to answer 'how did they get there':
Some of the worlds floating around out there are natives of the interstellar dark, but many are probably exiles, born into a planetary family that rejected them.

But why let them just float!? Bring a big black hole into the mix -  which appeals to my inner supervillian - and your wandering planet can become a charging one!

When a double star system wanders too close to the monster black hole [22] in our galaxies centre, one star can be captured, and the other thrown into space with a huge speed. These are the hypervelocity stars [23].

And, if you run the calculations, it turns out that the same thing can happen to the stars planets! Their encounter with the black hole leaves them tearing through the Milky Way, like huge cannonballs, at up to thirty million miles an hour. Faster than any other planet [24] - than anything natural that's bigger than a proton - they would see the whole disk of the galaxy, core to outer rim, in under two million years.

Video above: A journey towards the Milky ways titanic central black hole, showing the stars that rip around it in tight, high speed, orbits. Video courtesy of the European Southern Observatory. The guys with the thing for gigantic telescopes.

And then... it's goodbye to the Milky Way.....and on into the void between galaxies....