Yesterday's 'mystery solved' release from NASA seems to point to a certain kind of dark feature on the Martian surface being due to liquid water, stabilised against freezing in the Martian cold, or evaporating in the thin martian air, by the naturally occurring perchlorate salts in the Martian soil. It's a process that occurs on earth (well, similar to) and keeps a very strange lake called 'Don Juan Pond in Antarctica filled.

Reactions to this have been surprisingly mixed: A lot of people are happy to hear that our planetary neighbour is a bit less inhospitable than we thought, even if it's still damn inhospitable. Others are (maybe with some justification) pointing out that NASA has over hyped this a bit. They point out that  although this is the first really solid evidence for liquid water in this part of Mars, and solves the mystery of the 'Recurring Slope Linea' (RSL's), thin films of liquid water have been detected in results from the Phoenix Mars lander in the past.
Still others point out that the water in these RSL's will be incredibly salty -  maybe too salty for even the toughest extremophiles to drink. But it's still (in my opinion) a good find, and it shows us a (slightly!) friendlier side to the red planet. But don't look to me for the answers, here's the video of the conference (above) - judge for yourselves!

Parts of Africa, the America's, and the Atlantic suffered a radio blackout yesterday, as a result of a solar flare.The map below shows the most severely affected areas. This isn't an unusual event, and although really big solar events have been known to knock out power grids, there doesn't seem to be any danger of that happening here.

How Comet 67-p wound up that weird shape:

It seems that, for a while now, ESA's Rosetta spacecraft has been exploring not one comet but two - The famous double-lobed shape of comet 67-P is due to it actually being two comets stuck together:
“It is clear from the images that both lobes have an outer envelope of material organised in distinct layers, and we think these extend for several hundred metres below the surface,” says Matteo Massironi, lead author from the University of Padova, Italy, and an associate scientist of the OSIRIS team.
“You can imagine the layering a bit like an onion, except in this case we are considering two separate onions of differing size that have grown independently before fusing together.” 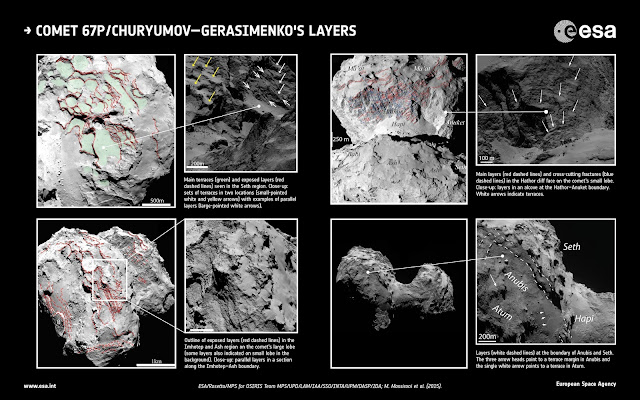 “Layering has also been observed on the surface of other comets during previous flyby missions, suggesting that they also underwent a similar formation history.” Added co-author Bjorn Davidsson of Uppsala University, Sweden. The results are published in Nature, here.
Posted by John Freeman at 08:26