Big things can have small beginnings

Firstly, if you're a Dr Who fan and haven't already seen this, I highly recommend it:

Anything that opens space exploration to a greater section of the world is, frankly, brilliant. Hence I am a big fan of ideas like the cubesat [1], which has bought the cost of putting an experiment into orbit down to the level that a major university- not just a major government or corporation- can afford.

It has done this, at least in part, by providing a standardised, reliable, nano-sat kit in which experiments can be housed, and by piggybacking on larger launches. However there are limits on what such a small vehicle can do, and one of them is propel itself effectively. 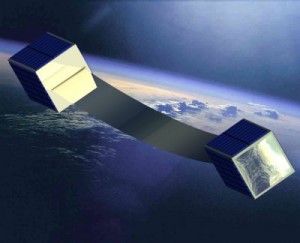 Image left: A visualisation of the prototype for the cubesail idea, being deployed. Image courtesy of the University of Illinois and CU Aerospace. They look a bit like the fuzzy dice over your cars rear view mirror don't they? Except in space, doing orbital velocity not 70mph.

So I am over the moon to talk about the work being done by the University of Illinois Aerospace lab, on the cubesail [2]. Click that link people, it's an entire PhD thesis on the subject.
Inheriting ideas from a proposed sail design called Ultrasail, the cube sail is a development of the cubesat,  incorporating solar sailing technology as a 250 m long unrollable sail, as opposed to a folded square sail with its obvious problems of folding ultra thin delicate material. A company called CU Aerospace [3] is working in collaboration with the lab to develop the concept, and the work so far has been funded by a NASA grant. If funding could be found for a demonstration flight then the next step would be a series of cubesats unrolling solar sail 'vanes' from a central core.

OK, there is still a long way to go between here and deep space missions cheap enough for any major university to afford, but this is a great, innovative idea. I'm keeping everything crossed that this flight will become a reality.

Perhaps this is a small beginning.