Vesta - last of its kind

I couldn't go to bed without including this:

OK, my guess earlier today was well wide of the mark.
However the conference was fascinating all the same, and underscores just what a remarkable protoplanet Dawn [1] is exploring.
In particular I was pleased to see three things highlighted by the conference: That Vesta is indeed a protoplanet [2], just how much the HED meteorites [3]- now all but certain to have come from Vesta- have contributed to our exploration, and how much telescopic observations have contributed.

Sample return missions to an alien world that were no more expensive than bending to pick up a fallen space rock: Sometimes the universe does come to us. But first, some music for the occasion:


Video above: The music is Ironheart, by Two Steps From Hell. Image from the movie 'Your Highness' I think. It's Natalie Portman, which wasn't picked by me, but I do approve. I like Natalie Portman. I'm only human dammit.

So, what has Dawn found?
Firstly, the evidence strongly suggests that Vesta is indeed differentiated like a full grown planet, with a iron rich heart, a mantle, and an outer crust. Estimates for the size of the core put it at about 70 miles across. By comparison, Earths core is 2000 miles across and Mars core is thought to be about 1000 miles across.

Image left: A slice through one of the HED meteorites. Iage courtesy of saharamet.com.

The HED meteorites now look almost certain to have come from Vesta, from different depths in its crust and mantle, and allow the team to draw conclusions about Vesta they otherwise would not have been able to. They are probably the  result of the two massive impacts that have obliterated the Vestan South pole, excavating 250,000 cubic miles of rock. The HED's tell us things that Dawn couldn't easily see: There are small amounts of olivine present in the HEDs, which tells us that the blast punched right through the Vestan crust and into its mantle.

However it is hard for Dawn to spot olivine from orbit for two reasons; the amounts of olivine are fairly small, and, since the giant impacts, smaller blasts have mixed up the surface, grinding everything into smaller pieces. 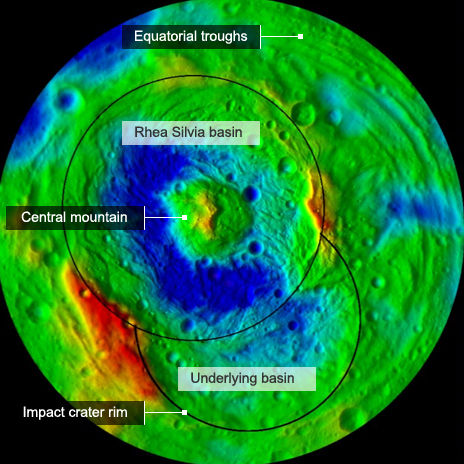 Image above: the Rheasilvia basin, and its predecessor Vanenia, have completely re-shaped the vestan surface. Image courtesy of JPL/NASA.
The two giant impacts, one on top of the other, have been dated by crater counting of the basins formed (on average impacts happen at a constant rate). The younger, Rheasilvia, is about a billion years old, which is a surprise as massive impacts are thought to have all but stopped around 3 billion years ago. The older crater, Veneneia, is harder to date because Rheasilvia is almost on top of it, but is at least 2 billion years old. The material thrown out by the last big impact sits as a layer of pulverised rock, 5km deep, around the basin. The structure of Rheasilvia is unusual, the central peak is almost a third as big as the crater itself. This is because the crater is getting on for as big as Vesta itself, which changes the way the crater forms. And the impact has had another effect: It essentially rejuvenated the southern hemispheres geology, leaving Vesta ancient in the north, and younger in the south. There are massive spiral patterns on the craters floor, and grooves running around the protoplanet that seem to be centred on the impact - the blast literally re-arranged the whole world.

Vesta has also surprised the science team with how varied the subtle colours of its surface are, again separating it from smaller asteroids that are relatively monotonous, and pointing to a complex surface. The crust seems to be a complex mix of diogenite [4]and eucrite [5] rocks, but the general dominance of diogenites supports the idea that most Vesta melted early in its history.
The surface is clear of any obvious lava flows or volcanoes, which is likely of a consequence of all the activity being shutdown a long time ago, and Vesta getting one hell of a pounding since then.

The data Dawn has collected, in conjunction with the HED meteorites, paints picture of Vesta as the last survivor of a type of rocky protoplanet. It's brothers and sisters were likely either pulverised by impacts with objects like the one that excavated Rheasilvia, or absorbed into the growing main planets.

So we now know that Vest is a baby planet, it  had geologic activity and a planet like structure, and has stood up to a spectacular beating from the debris in the asteroid belt. And, we have pieces of it here on Earth!

All this coincides with the latest batch of scientific papers released from the Dawn team, over at Science [6]. Be warned, it's a pay to view the whole paper deal.

The data Dawn has collected also contributes, along with data from infrared and optical telescopes, to helping planetary scientists decide where to send future mission to further unravel the history of the solar system. A worthy legacy, but the show's not over at Vesta yet: The Vesta phase of the mission has been extended by 80 days, first when the team didn't need the forty days built into the plan to deal with anomalies (the spacecraft going wrong in non space speak), and secondly when they found Dawns ion engines [7] were performing above expectations. So the trip to Ceres [8] (the next target) will need less time. Because of the extensions Dawn will get a chance to image the ancient north polar region, which is currently in winter darkness. Image right: Ceres, to be visited in 2015 by DAWN, as imaged by the Hubble space telescope [9]. Image courtesy of NASA/JPL.

After that, it's on the Ceres, an even bigger protoplanet than Vesta, with a surface that suggests much less heating and volcanic activity, and possibly large reservoir of ice beneath the surface.

And no, that's not my WAG again, that's the official facts... at least until Dawn gets there and begins to surprise us all over again!

One last thing: The relevance of missions like Dawn to plans, now plans with a lot of cash and determination behind them [11], to extract resources from asteroids was raised, and I really ought to mention those:

It's just too big. I can't decide if its madness or genius, but I am sure it'll be interesting to watch how it all unfolds. More on that when I've got my head around it!