Hows my blogging? Leave some feedback, I get better at this, you get a better read! Never follow Absinthe with warm Sake. The green fairies get hammered. 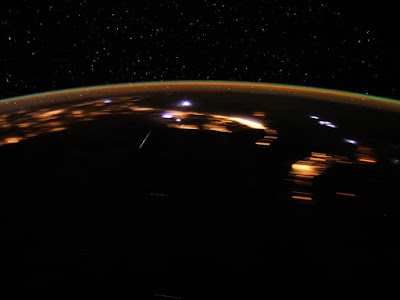 Image above: A Lyrid meteor slams into Earths atmosphere - photographed from above, by one of the crew of the International Space Station. Do yourself a favour, check out the original here [1]. Then do yourself a bigger favour and watch the video [2]. Image courtesy of NASA.

Meteor showers are streams of tiny particles left behind by passing comets -  so when you see one you are literally seeing parts of a comet raining down from the sky. We've just passed through the Lyrid meteor shower, a stream of particles from comet Thatcher [3], a 2600 year old trail of debris with a history of surprising humanity: In 687 BC it was described as being so intense that 'the fixed stars were invisible, and stars fell like rain'. Although the shower usually peaks at around 20 meteors an hour, in 1803 it peaked at 700, and in 1982 at 90. Bigger Lyrid meteors, known as Lyrid fireballs, can throw shadows and leave behind visible trails of smoke.
And this year the van sized Sutters Mill meteorite [5] came down while the shower was on - and blew up rather spectacularly, leaving people seeing spots [4], spraying the ground with pieces of space rock, and with an estimated force of 4 kilotons (Hiroshima's 'Little boy' was about 15 kilotons). It's arrival was probably just a coincidence, but mentioning it gives me an excuse to post a stunning picture its arrival, so there: 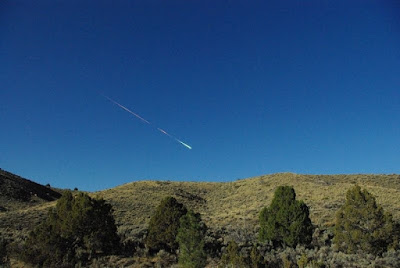 Image above: The 70 ton Sutter's Mill Meteorite blows up over Nevada with the force of a small nuke. Pretty, isn't it! Image courtesy of JPL/NASA.


Comets are cryogenic time capsule from the earliest times of our solar systems existence, and Thatcher hails from far reaches of the Kuiper belt [6], so you'd think that the Lyrids would be an excellent opportunity to do some Laz-y-boy deep space exploration.

Well I did, anyway.
And it turns out, I was right!


Video above: NASAs efforts in studying the Lyrid meteor shower. Courtesy of NASA/JPL.


As well as a world wide campaign of ground based observations and the observations from the ISS, Tony Phillips from spaceweather.com [7] has led a team of high school and middle school students in an edge-of-space balloon mission [8], to try and capture images of the Lyrids from 100,000 feet, using an experimental NASA camera. Studying how the brightness and intensity of a meteor shower changes with time tells us about the size and evolution of the swarm of particles, which in turn tells us about the comet that produced it.


Video above: Students launch a near space balloon mission to capture images of the Lyrid meteor shower. Video courtesy of Tony Phillips.

All the above efforts are contributing to producing a 3D image of the Lyrids, as described in this 'NASA chat' transcript [9]. NASA also often fly a high altitude ER2 aircraft around this time of the year, hoping to pick up cosmic dust [10] from the shower using a large, cooled, collector mounted on the wing. The dust is relatively intact, as it's small size lets it float down to Earth rather than streaking in as a meteor, which makes it a great way to get material from space - although a lot of sorting is needed to separate the cosmic dust [11]from the various kinds of Earth dust. The increase in the amount of dust entering the atmosphere during a shower is actually fairly slight, but since any piece of interplanetary material found is a sample from deep space it pays to maximise the chances!


Incidentally, it's just a small thing but: SpaceX will be attempting to launch it's Dragon space capsule tomorrow!
The mission is to the ISS, hauling supplies, and hopefully becoming the first commercial entity to fly there.
If they succeed I will attempt to do a back flip with joy, and probably sprain something. If something goes wrong, I hope they will be able to push through - Elon Musk certainly has the drive and ambition to ride out a few mishaps. To SpaceX [12]: Good luck!

Image above: A CGI impression of the Dragon spacecraft docking at the ISS, as it hopefully will later this week. Image courtesy of Discover magazine.