Hows my blogging? Leave some feedback, I get better at this, you get a more interesting read!

OK, so the last one doesn't even have a real name yet. But that's the point: Our knowledge of the Pluto [1] system is still expanding, and when the New Horizons [2] probe reaches it in 2015 it's going to get a whole lot bigger.
Pluto first cropped up in  1930, when Clyde Tombaugh [3] was searching for the planet believed to be responsible for unexplained perturbations in the orbit of Neptune. As it turned out Pluto, at just over a fifth the mass of our Moon and about two thousand km across, was much to small to cause the observed changes in the orbit of Neptune. But Clyde had struck it lucky, and for many decades Pluto was regarded as the ninth planet despite its small size. Image above: The original photographic plates that led to the discovery of Pluto. See it? Well it's got an arrow pointing to it. Which helps. But imagine trying to spot that tiny moving blip without an arrow to point it out. Image courtesy of the Lowell Observatory.

Oh, the name? Suggested by an eleven year old schoolgirl, Venetia Burney, who got £5 for coming up with the winner. That's about £230 in todays terms- who says Astronomy and Greek mythology don't pay off?

Image Left: The negative images that led to the discovery of Charon. The lump on the top of the left hand image is the water ice moon. Image courtesy of the US Naval Observatory.

In 1978 James Christy noticed a lump on the images of Pluto, that moved periodically. This lump turned out to be Charon [4], the largest moon of Pluto. Charon is so large, compared to Pluto, that the two worlds orbit each other, moving around a point in space (called the barycentre [5]) between the two of them. In 1985 evidence of a thin, thin, thin atmosphere [6] was found, and confirmed in 1988.

Then, in 1990 the Hubble space telescope [7] was launched. It had some (coff) 'teething problems' at first, then it opened up a whole new sky for us. Images left: Top: Hubble, hanging over Earth.
Bottom: A map of the Kuiper belt of icy objects, showing the trajectory of New Horizons. Pluto is definitely not alone out there. Image courtesy of JHU/APL.

Hubble found other objects in the Kuiper belt - the vast torus of icy objects beyond Neptune - as big as, or bigger, than Pluto. So Pluto got downgraded from Planet to Dwarf Planet, under the new IAU definitions [8]...

...Although, being a 2000 km wide world of ice and rock, I don't think it much cared...
At the same time, under the gaze of Hubble, the Pluto system began to flower into a very complex place: In 2005 two much smaller moons, Nix and Hydra were found, and in 2011 S/2011 P1 was found while astronomers were looking for evidence of Plutonian rings.
The discovery of these little moons is an astonishing feat: Pluto is nine light hours away, or about 5 billion kilometers,and while Nix and Hydra are somewhere between 100km and 200km across each, S/2001 P1 is much less than 50 km across.

So, Pluto has gone from being a tiny spot of light on one of Clyde Tombaugh's photographic plates to just one of a the massive family of Kupier belt objects, to a strange, cold, complex place of multiple moons, and perhaps even rings.

Which begs the question: What are these worlds like?

Well, that's why we're sending New Horizons there! But there are some things we already know:

Pluto is a frigid but constantly changing place: The surface varies between white, charcoal black, and vivid orange. It is covered in frozen methane, and has polar caps of solid nitrogen. The atmosphere of methane, nitrogen, and carbon monoxide, freezes and falls as snow as the winter sets in, and may stream away from the planet in a tail, like a giant comet. There may even be clouds of hydrocarbon haze [9], formed by methane breaking down and re-forming into more complex molecules, under the suns distant UV light. Such molecules are thought to have been instrumental in beginning life on Earth.


Video above: Hubbles best resolution images of Pluto, merged into a video map of the whole dwarf planet. Courtesy of NASA/JPL.


Charon, the biggest moon, has a solid water ice surface,  a low density suggesting it is more ice than rock and  is more odd even than Pluto: There are patches of crystalline water ice, and ammonia hydrates, on its surface [10]. Crystalline water ice breaks down into amorphous ice under space radiation, which, bizarrely, suggests that Charon has some form of internal activity. That means heat which is.... surprising to say the least, for a world well under a fifteen hundred km across. But we have seen tiny little worlds with cryo-vulcanism (ice volcanoes erupting ice and cold gas) before, at Enceladus, and at Triton. The ammonia hydrates are, perhaps, a clue: Ammonia is a potent antifreeze, perhaps keeping a very little water/ammonia mix slushy deep beneath the surface, where it might find it's way out to the surface from time to time. 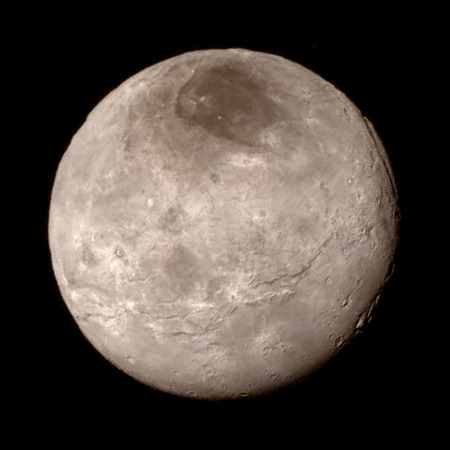 Image above: A reconstructed black and white image of Charon. Image courtesy of the Lowell Observatory.

Which begs a certain question about Charon, given how adaptable we know terrestrial extremophile life to be....

Nix...well that is a real unknown. Perhaps grey, or red in colour, with estimates of size ranging from 45 km to 140 km. Hydra is more or less an unknown to, probably grey-ish in colour, and between 60 and 160km across. S/2011 P1 is truly tiny, only tens of km across.

Video above: A NASA science cast on the /new Horizons mission to Pluto. Courtesy of NASA.

The presence of the the three small moons might imply a system filled with debris, from which the idea of a ring system for Pluto comes. This has caused some headaches for the New Horizons team [11], since they have to navigate their spaceship through the Pluto system - and it may be filled with unknown chunks of rock and ice. When it arrives in 2015, New Horizons is set to reveal this strange system of double-planet and moons in even greater detail than Hubble could. Who knows what Pluto could become to us then?
But one thing is already clear:  Pluto isn't a distant ball of ice and rock. Pluto is a complex, alien, changing planetary system, sitting on the edge of the interstellar dark.

Image above: New Horizons sets out for Pluto, on the dark frontier. Clyde Tombaugh's ashes are aboard. When asked by NASA scientists if they could pay a visit to the planet he discovered he said: "You're welcome to it!". Image courtesy of NASA/JPL.
List of links:
[1]http://nineplanets.org/pluto.html
[2]http://www.nasa.gov/mission_pages/newhorizons/main/index.html
[3]http://starchild.gsfc.nasa.gov/docs/StarChild/whos_who_level2/tombaugh.html
[4]http://solarsystem.nasa.gov/planets/profile.cfm?Object=Plu_Charon
[5]http://en.wikipedia.org/wiki/Barycentric_coordinates_(astronomy)
[6]http://news.discovery.com/space/pluto-has-a-strange-atmosphere-110420.html
[7]http://hubblesite.org/
[8]http://www.iau.org/public_press/news/detail/iau0603/
[9]http://www.dailymail.co.uk/sciencetech/article-2077674/Building-blocks-life-Plutos-surface.html
[10]http://www.sciencedaily.com/releases/2007/07/070719011140.htm
[11]http://www.boulder.swri.edu/~throop/files/nh_rings_whitepaper.pdf
Posted by John Freeman at 13:07