Hows my Blogging? Leave some feedback, I get better at this, you get a more interesting read!


Almost anyone with an interest in space exploration will have heard of Planetary Resources Inc [1] (formerly Arkyd Astronautix), the company that has announced plans to mine asteroids, and will have formed their own opinion on it.
Me? I'm over the moon that someone is trying this, but I don't quite see how the scheme is going to make money. True I have the same grasp of economics as a tazered chicken, and the founders of the company have admitted that this is more about developing their vision for humanities future than short term profit.
So I'm not going to talk much about the company directly. The Internet is abuzz about it, and you can learn far more from their website than you could from me.
What I will do is take a quick peek at some of the developing ideas for moving asteroids about, as pointers to how an asteroid resource extraction effort might eventually take shape:

Image right: A gravity tractor hangs in space over an asteroid.Image courtesy of Dan Durda.

Just to complicate things, many asteroids are piles of rubble, not solid rocks, and spin in all three axis at once. So firing bombs at them, or landing a big rocket on the surface, isn't as simple as it might appear.
But in the void of space there is no friction, and the few forces (such as the solar wind) acting on bodies are very slight. So diverting an asteroid doesn't need the colossal force you might imagine.

The gravity tractor [2] takes advantage of this fact: The space craft doing the towing hangs in space, not too far from the surface of the asteroid, and lets the small gravitational attraction between the asteroid and the craft move the asteroid towards it. The craft fires a low thrust engine to keep the distance between itself and the asteroid constant, and so the asteroid slowly follows it. It's a nice, elegant, idea but  it carries the drawback of taking quite a long time to take effect, as too much thrust would just send the towing ship off into space.

Video above: The Sun, the biggest power source in our solar system. Video courtesy of NASA/Solar Dynamics Observatory.

The Sun is the power house at the centre of our star system, and it'd be foolish to miss a trick that even plants manage: Take advantage of that energy. There are a variety of ways that the sun might be used to move an asteroid:

Image left: Solar panels, much like those you might install on your own roof, could power an engine to move an asteroid. Image courtesy of solarenergy.com.

Solar powered thrusters on the surface could move a solid object quite quickly, but encounter problems when moving loosely bound rubble piles, the same as regular thrusters. However the problem of carrying your fuel out there with you is at least avoided. The problems with rubble piles can be mitigated by applying a gentle thrust for a much longer time, such as from an ion engine, and by doing your homework on the asteroids spin and internal mass distribution, so this idea still holds some water. However with current ion engines we'd need a looong time to significantly change the path of a big asteroid.

Image right: A solar reflector kilometres across focuses the Suns energy onto the surface of an asteroid. Image courtesy of sciencephotolibray/Chris Butler.

Another solar powered approach could be to station a huge parabolic reflector near the asteroid. This would focus sunlight onto the surface, vapourising part of it to produce a plume that could push the rock onto a new course. The biggest problem with this idea is getting a large reflector out to the rock, although technologies like those behind the Ikaros solar sail could be useful there.

A solar sail [3] combined with the gravity tractor idea is yet another possible approach. We're still some way off being able to deploy solar sails of the size needed, although, as I blogged about earlier this week, there are people working on innovative sail designs.

Coating the rock in a reflective layer would let it gathered momentum from the pressure of sunlight, but without the high ratio of surface area to mass that an ordinary solar sail would have it needs a good long while to work, and steering with a 'dumb' reflective coating would be hard. Similarly, painting the asteroid white to change the way the YORP effect [4] pushes on it  would require a gigantic bucket of paint, and a long lead time as well.


Video above: Los Alamos scientist Bob Weaver explains that YES, you could stop an asteroid with a well placed nuke. Courtesy of Los Alamos National laboratory.

Well, as Bob explains above, you could save the world by nuking an asteroid, but moving one for mining might be harder. Nuclear weapons could move an asteroid, although the effects of a nuke in space [5] are quite different than those of one on the ground, in a similar fashion to the Project Orion spacecraft [6]. But once again we run into the problems of the asteroid  breaking apart, and remember we're thinking of mining this thing, so making it radioactive probably isn't a good idea.

As NASA's Deep Impact mission [7] showed by blowing a hole in comet Tempel 1, we can crash a big lump of metal into an asteroid, perhaps changing its course. But, well, look at that picture: If you did that to a small or weakly built asteroid you'd just have lot of floating bits. That said, a Deep Impact style mission might be a very useful quick 'n dirty way of finding an asteroids composition.

This is a relatively recent suggestion by researchers at the University of Strathclyde. Again it's a simple idea in principle: Launch a swarm of tiny space craft that will crash into the asteroid, each one imparting a small change in momentum. It has advantages over sending one big impactor or bomb: The smaller knocks would be unlikely to disrupt even a loose rubble pile, the swarm could still impart a good amount of energy fairly quickly, and such a swarm would be fairly simple to build and  launch. However we are still a way off having the satellite-on-a-chip style space craft needed, although prototypes are being tested on the ISS [8]. 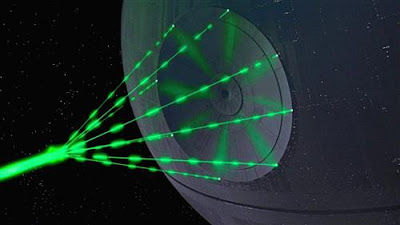 OK, we're not talking fielding a huge Death Star type laser. Such things are expensive, and look gaudy in the night sky.
Lasering an asteroid would move it by vapourising material off the surface to produce thrust [9]. The neat thing about using laser light is that you can spread the beam across the entire surface, allowing you to give the asteroid a meaningful nudge without risking it breaking up or absorbing our push by deforming.
Lasers fired from Earth would need to go through our atmosphere, which would absorb part of the power, and Earths rotation would limit the chances to hit the target. A large solar powered laser in orbit has been proposed, but the falling down point is that it would be hard to  build, need a lot of power, and probably maintenance. The University of Strathclyde, who have a bit of a thing for shoving asteroids about, have a new take on the laser power idea: Send up a swarm of smaller lasers, and have them bombard the rock in concert. The difficulty in building and launching such swarm is much lower, and the overall effort can survive a few units going down through extended use.

To view the abstracts for both the Univeristy of Strathclydes asteroid moving proposals, presented at the Astrobiology Science Conference. Pay the ASC website a visit, go to 'scientific program', and put 'Gibbings' into the search engine. No, I'm not him, I just like both the ideas he presented there. I'm John Freeman, and BTW, I just passed my PhD, so I'm going to go and get drunk. Stay tuned for physicist with five alarm bell hangover! Earth from the International Space station. Will a worker or robot on an asteroid mine one day have a similar view? I hope not; ISS is only four hundred km up, thats too close for a big rock and my comfort. Still, it's pretty, which is why I put it there. Image courtesy of NASA