A miniature mission to the Moon, and what the hell ARE those spots on Ceres?

A Miniature Moon mission  to search out lunar ice:
Over the last ten or fifteen years a quiet revolution has been going on in space technology: Like computers in the latter half of last century, they've been getting smaller - and the most popular of the miniature spacecraft is the 10cm by 10cm by 10cm cubesat.  This year has seen cubesats start to come of age, with a cubesat flying with a solar sail, cubesats flying to Mars, and now a cubesat based craft from Arizona state University is set to map water ice deposits on the Moon:


Latest pictures back from Ceres:
Five months ago the Dawn spacecraft pulled into orbit about the dwarf planet Ceres. One of the first things its team noticed - in fact something that had even been noticed by the Hubble space telescope from Earth - were some incredibly reflective spots punctuating the dusty surface. These were so bright that Dawn's camera had trouble seeing inside of then, due to the glare.
But the Dawn mission is a billion dollar exploration vessel controlled by some of the finest so they've...they've..... oh I can't keep that up, dammit. We still don't know what the bloody things are.
What do we know? We know they're bright, and we know that the brightest spots appear within Occator crater - and apparently are over a long tectonic-fault like structure...
We know that Ceres is rich in water ice, so subsurface water ice thrown up to the surface by an asteroid hit has been suggested - but we also know that ice would rapidly evaporate into space. So another suggestion that has been that they are some sort of salt deposit. The salt would last longer, although not forever - it would still get wiped away my meteorite strikes eventually. But either way the question is how did it get there, and why that spot? To add to the mystery are reports from the Dawn team that they've seen clouds or hazes over the crater. So, as far as explanations go,The main contenders so far seem to be:

Exposed ice
This would make a lot of sense, as  Ceres has lots of ice. Evaporating ice might also explain the hazes. But ice would need to be replenished regularly by some mechanism

Salts
Salts could have been left behind in a more ancient time when Ceres core was still warm and salty water could travel to the surface.

Venting
Although this would be the most exciting possibility of all it's also the least likely. A while back the team thought they'd seen something - perhaps a plume from a vent - rising over the edge of Occator but this has stayed unconfiremed. Although most computer models suggest Ceres core froze solid aeons ago, a ew do allow some ectonic activity to continue, and an actve Ceres might also mean one with a subsurface habitable zone. 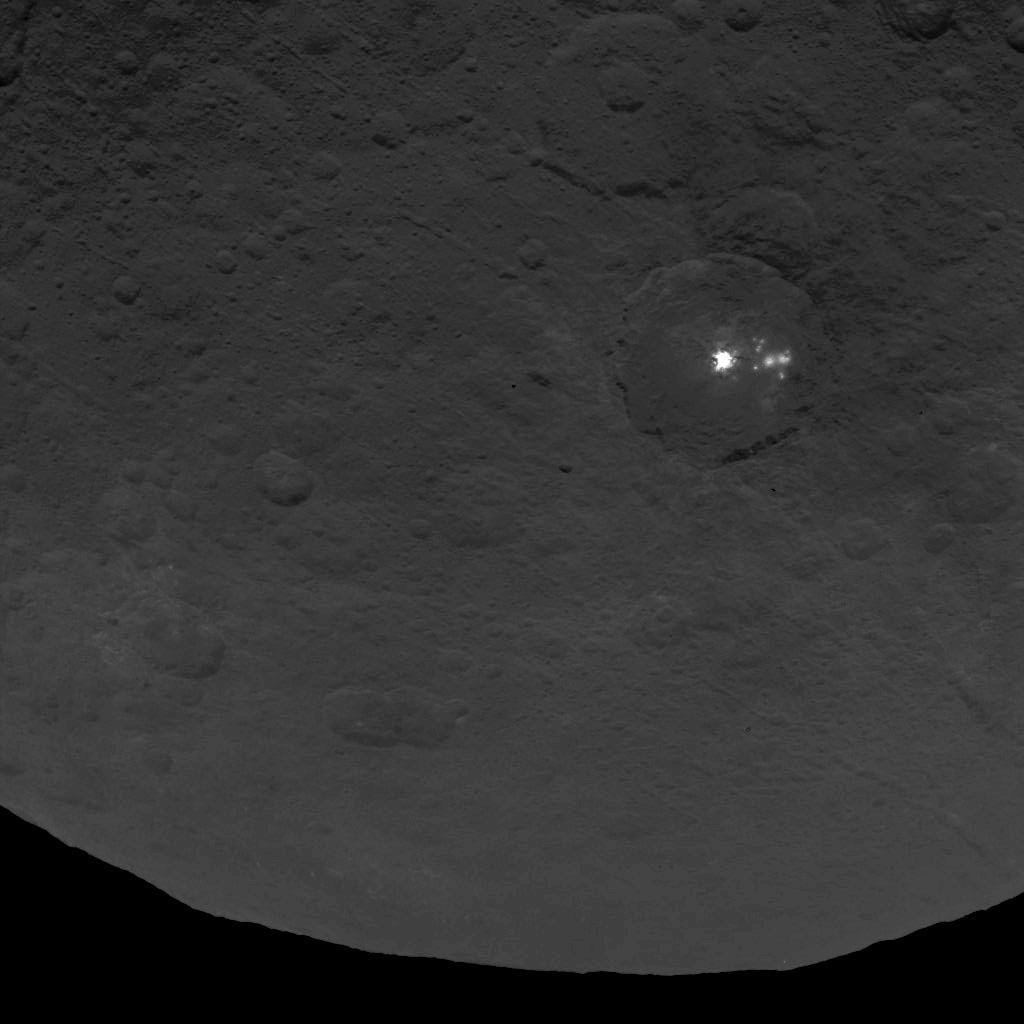 We'll know more soon, as images of Occator and its mysterious bright spots should arrive in the coming weeks!

As long as they're not neon signs saying 'drink Starbucks coffee....'

The exploding glaciers of Pluto

A year ago the (dwarf) planet Pluto was only a dot in the eye of the Hubble Space Telescope. Now New Horizons has flown past Pluto, making the dwarf planet its first stop as it explores the Kuiper belt - giving us the first close up views of the surface...

Above: The New Horizons flyby of Pluto, revealing a strange new world to us - and this is just the first of New Horizon's targets... Courtesy of NASA.


... and showing us some outlandish landscapes we are far from understanding yet...
It's an entirely new world, never seen before, so there's lots to get scientists scratching their heads. But right away something leapt out as odd in a different way - because of its very familiarity: Pluto has what looks a hell of a lot like glaciers. In case you don't pay a lot of attention to geology, glaciers a flows of ice that wind their way across very cold landscapes. For glaciers to flow - on Earth at least - a certain amount of the ice must be warm enough to contain a small amount of water.


On Pluto all the water ice is deep, deep, frozen - as hard as rock. So for these glaciers to show the signs of flow they have they must be made of something with a far, far lower freezing point - and the most likely candidate is nitrogen, the gas that makes up most of our (and Pluto's) atmosphere.
The (apparent) presence of nitrogen glaciers suggests  the physical and chemical behaviour of Pluto's surface might get very, very odd indeed. Nitrogen, when it freezes, has some tricks that water doesn't. One thing is that the ice can have two kinds of molecular structure, and when it  changes from one kind to the other... well, watch the video...

As the seasons change on Pluto the type of ice that is most stable changes. The nitrogen ice will always seek out the most stable form so... well imagine the explosive reaction that happened in the video happening all across a massive glacier. I have no idea what the glacier would do, but at least the images of Pluto don't look like the dwarf planet exploded.

These glaciers might be a hint at more than just alien physical processes and chemical reactions. It could be a hint of a habitat for Plutonian life. Y'see, if these glaciers are made of frozen nitrogen, and flow like glaciers on Earth, then thirty meters or so beneath the surface they are probably riddled with veins of liquid nitrogen. Recently, computer simulations have shown that cell membrane-like structures could exist in the frigid liquid methane seas of Titan, and it's been known for a while that there's something on Titan is consuming hydrogen and acetylene.
So is it much of stretch to imagine some Plutonian equivalent to life operating in subsurface pockets of liquid nitrogen? Many microbes live beneath the surface of Earth's glaciers - although that's not really a fair comparison. Still, while it's a far fetched idea, it was suggested a long time ago that liquid nitrogen chemistry might support life based on silicon instead of carbon.

If that's a bit much of a stretch (and I'll admit I've been more imaginative than scientific with it) a more prosaic line of though suggests there might be a habitable zone beneath Pluto's surface: Pluto is loosing its nitrogen atmosphere at a rate of 500 tons per second... yet it still has an atmosphere. That suggests some sort of internal activity is replenishing it, and internal activity might well mean enough heat to keep a subsurface ocean, like Jupiter's moon Europa.

It's very likely that I won't live to know the answer - ships to Pluto don't exactly grow on trees. But one thing we've learnt is to expect surprises, so who knows what may be lurking beneath that pinkish surface....
Posted by John Freeman at 00:12 No comments: