EDIT: I'm a numpty, yet again, the press conference begins at 11.30 eastern daylight time . D'oh.
A quick note, on a small but very interesting space mission:

Nu-STAR ready to take to space! 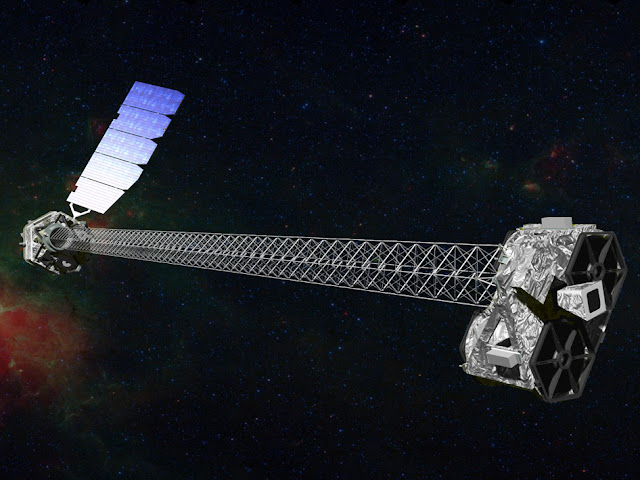 Image above: The Nu-STAR spacecraft, with its unfoldable boom and X-ray optics deployed. Artists impression, courtesy of NASA/JPL/Caltech.

X-rays astronomy [1] has always been a bit of a bugger to do, as X-rays from space don't go through Earths atmosphere very well  - yes, I know that seems odd, since we use them to look inside ourselves. We use them for that because they will go through some kinds of biological tissue (muscle) and won't go through others (bone for example). However a hundred kilometres of air, like the hundred kilometres of air sitting on top of you right now, stops them rather nicely. Which is good because lots of X-rays would be bad for us, in the sense that they would kill us all.
The other problem with X-ray astronomy is that focusing X-rays isn't easy [2]: Most materials that they don't go straight through absorb them, instead of reflecting them. The highest energy X-rays, which would let us observe some of the most powerful events in the sky, are especially hard to handle. But it can be done [3], using technologies like the Wolter telescope [4]. Getting one of these into space could open up a whole new universe for us! 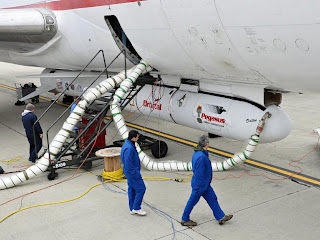 Image Left: The Pegasus rocket, with Nu-STAR aboard. It's one of those microsat launchers that launches from beneath the belly of a big aeroplane, which means the Nu-STAR is actually quite dinky when it's all folded up. Image courtesy of NASA/JPL/Caltech.

So NASA has built the Nu-STAR [5] (Nuclear Spectroscopic Telescope Array) spacecraft, based on the Wolter telescope, and which is being launched tomorrow on an Orbital Sciences [6] Pegasus rocket.
Once in space it will deploy a ten meter long boom, with a set of X-ray optics on the end. The long boom is needed because the X-ray optics have a long focal length [7], so the optics need to be held away from the X-ray detectors.
The satellite should totally change the field of X-ray astronomy, allowing us to do things like mapping the newly forged heavy elements in the debris of supernova. Since all the elements heavier than iron formed that way [8], learning more about how the gigantic supernova explosions distribute them across space helps us understand our solar systems birth. Nu-STAR will also be a very sharp eyed black hole hunter. Which isn't ancient solar system related, but just about anything to do with black holes is cool in my book. 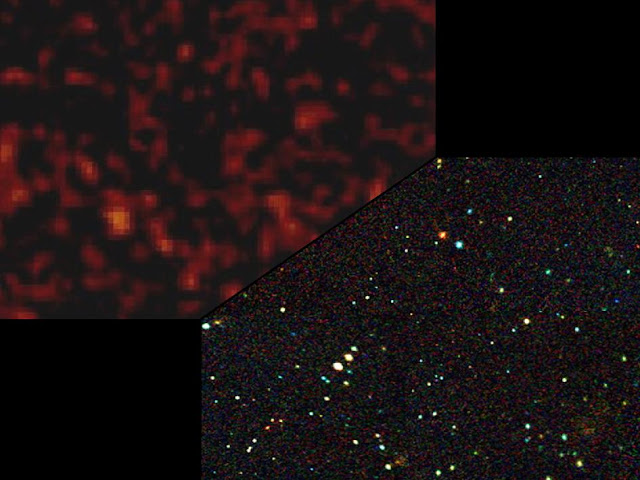 Image above: To show how much Nu-STAR will improve X-ray astronomy, here's a comparison between an image taken by ESA's INTEGRAL spacecraft (Top left), and the kind of image expected from the Nu guy (bottom right). See what I did there? Make you laugh? Groan? Throw something at the screen? Well, at least that's a reaction. Image courtesy of NASA/JPL/Caltech.

The Nu-STAR team will have a news conference tomorrow, at 11.30 British time, with the following panelists:

And you can get a live audio stream of it here [9].
I'll be at work then, cussing at the machines. That's not how I usually work, it's just missing the launch. Ahem.