Our Sun is the center and lord of our star system in many ways; it is the most massive object, has the most powerful energy source, and dominates the solar system gravitationally. Almost all life depends on the sun for energy, and the surface of our Earth is 'just right' for living things because the sun warms it without scorching it, or battering the surface with [1]gigantic flares.

Image above: The Sun. Imaged in wavelengths corresponding to iron and helium by the Solar Dynamics Observatory. Courtesy of NASA.
But 4.5 billion years ago, as the planets were coalescing out of the [2]pre-solar nebular, the Sun was a very different creature: Not a stable and long lived [3]yellow dwarf, our sun was a temperamental [4]T-tauri star.

T-tauri stars have developed past the [5]proto-star phase, but have not yet begun  the full throated [6]power producing roar of fusion. They are like cocky teenagers: they talk the talk, and from a distance you could think they were full fledged star, but a closer inspection reveals an underdeveloped core, and behavior prone to outbursts, tantrums and occasionally violence. Image above: The star T-Tauri, first of its kind to be discovered. Image courtesy of astronet.ru.
T-tauri stars shine by [7]converting gravitational energy into heat and light: the star is kept 'inflated' by the heat and energy of the inner layers, and the outer layers emit this heat and light into space. This cools the star, so it contracts. As it contracts it heats up again, and continues to shine. This can continue for millions of years. in face some astrophysicists like to be very clear on the following point: Nuclear fusion didn't make the sun hot and bright- heating from gravitational compression did that- fusion is what took over from compression later in the suns life and keeps it hot and bright today.

At an estimate, just before before nuclear fusion began in its core, our star was contracting at a [8]rate of twenty feet per year. As it began to shine it was a glob of gas [9]the size of the orbit of mercury, around 60,000,000 km across. Today it is around 695,500 km across, so it shrank down a lot getting to its present size.
As it contracts, like a ballerina bringing her arms in as she pirouettes, the Sun spins faster and faster. As the sun is made of plasma, electrically charged gas, this sets up [10]a magnetic field that is colossal compared to todays- up to 1000 [11]gauss. Magnetic field lines like great tree trunk thick tentacles reach out into the protoplanetary disk and [12]scoop down chunks of innocent matter to its searing surface. 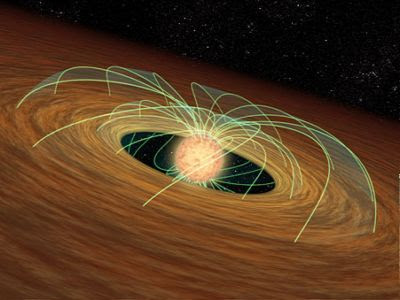 Image left: An artists visualisation of a T-tauri star reaching into ots protoplanetary disk with its magnetic field. Image courtesy of NASA/R.Hurt.

A [13]solar wind a million times stronger than today's belches out of the stellar surface, with speeds of several hundred kilometers per second. The protoplanetary disk surrounding the burgeoning sun focuses these winds above the poles, giving ghostly [14]twin pillars of light shooting out of the epicenter of the disk. This T-tauri wind sweeps the lighter as and dust particles out of the protoplanetary disk and into the cold vastness of interstellar space.
The Suns over developed magnetic field has a strange effect on it: Out to around 20 solar radii the magnetic field maintains it s grip on the fleeing star stuff, so the entire wind is forced to rotate at the same  rate as the Sun does, like a giant vortex sweeping through the disk. The atmosphere is unstable, and was probably prone to [15]gigantic sunspots, and huge flares that could double the Suns brightness for a brief time. This was not a friendly life giving star, and if todays Sun were to return to its old habits it would [16]devastate our blue marble of a world more thoroughly than any weapon conceived by us tiny humans.

From destroyer of worlds to giver of life:

While the surface has already begun to shine, deep in the core, under [17]incredible pressures, the [18]density and temperature are increasing as the Sun collapses down. The crushing pressures at the bottom of Earths oceans, or the density of the heaviest metal, have nothing on these conditions. The gas here is a a soup of plasma, and as it originally comprised hydrogen this means that the naked proton cores are zipping about and colliding with each other. Very very occasionally, as the density and temperature rise, [19]they will fuse releasing energy. These events are very, very rare. Most protons in a star, even a full fledged main sequence powerhouse, will only go through one fusion in their entire career. But as the density skyrockets the odds of a fusion event happening in any given cubic centimeter of the suns core does too, and as the temperature goes up the protons blast into each other with ever more ferocity making fusion easier and easier to happen.

There are different flavour of fusion: Lithium and deuterium fusion for example need less energy to make work that protium fusion, and [20]brown dwarf psuedo stars, for the brief time the have fusion at all, [21]have only these kinds. But these gasses are much less abundant than normal hydrogen, an are quickly burned up in a full grown star.

So as it first came onto the scene fusion power hardly made an impression on the young Sun. But as the heat got fiercer and the pressure at the core more crushing, it began to supplant compression as the main power source. In a slow and creeping fashion, it began to make compression unneeded, and so the compression slowed. Every little bit of further compression the sun tried meant more fusion, so more power to hold it up, and less compression in the future. Over eight to ten million years as the Sun compressed down the  fusion spread. Eventually, like a fungus spreading through the stellar core, the fusion reactions took over completely, and the sun ceased contracting: It had made the leap from T-tauri youngster to main sequence yellow dwarf.

At the same time as this was happening the massive magnetic field was sowing the seeds of its own down fall. Earlier I mentioned that the field was so strong that it was keeping the solar wind connected to the solar rotation- it forced the wind to spin with it. [22]It also connected the sun to the surrounding  protoplanetary disk- and this was acting as a brake, taking angular momentum put of the sun and putting it back into the disk.
By the time fusion had taken over in the core the sun had slowed its mad spin, the magnetic field had calmed and the battering force of the T-tauri wind had abated. The [23]Sun was fainter than today, only 70% of its current intensity, but it was recognizably our pleasant and friendly Sun, and it will remain that way for billions of years to come.

How do we know this?

Much of what we know about the young Sun is inferred from what we know of it today- coupled with what we can see of developing stars out in the universe. A recent development in solar studies has been the [24]Solar Dynamics Observatory. Stationed in a geosynchronous orbit this is the most advanced space telescope ever turned on the Sun.

Image left: The Solar Dynamics Observatroy, set for launch. The spacecraft is part of NASAs living with a star program.

T-tauri phase stars are easily picked out by [26]spectroscopy, as hey have yet to burn off there lithium content, and so this gas can be detected in their atmospheres. From looking at these we can see that they are unstable, surrounded by disks of protoplanetary material, and send great pillars of radiation into the empty space above their poles. 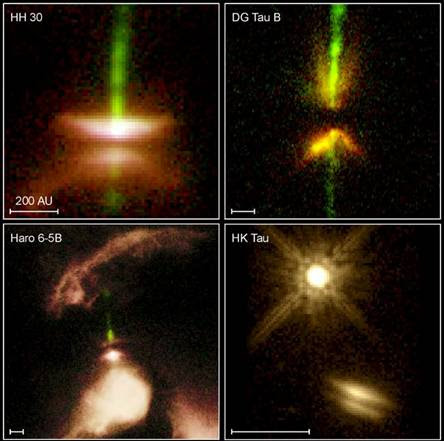 As we cannot see many of these stars directly progress is made in the time honoured fashion of trial and error: Astrophysicists develop a theory, and polish it until it can make predictions of what we should observe. Based on how well the predictions match what we can actually measure about these stars the astrophysicists go back and polish their theories and models some more.  A great many observatories, across many frequencies of the [26]electromagnetic spectrum ([27]Radio to [28]infra red to visible to [29]UV to [30]X-ray), are engaged in the study of these young stars, but progress is often frustratingly slow; they are distant and often swathed in the remnants of the [31]bok globules that cocooned them as they went through their early development.