I have a few items sitting in my 'half written' pile that I'd like to mention but don't have enough detail on to write up in full. So here, in the spirit of jumbled collections of things (from asteroid rubble piles to dirty laundry), is a collection of stories of fragments and fragments of stories for your perusal:

Firstly, it is with sadness that I note the passing of Brian Marsden, former director of the minor planet centre. A full obituary can be found [1]here. He died aged 73.

I am also saddened to note the passing of Allan Sandage. He was one of the mot prominent researchers into observational cosmology, and a former assistant to Edwin Hubble. The Carnegie Observatory has [2]a full obituary here. He died aged 84.

Image above: Allen Sandage. Image courtesy of the Carnegie Observatory.
On a happier note there is some great news from Japan:

Hayabusa has collected pieces of asteroid Itokawa:
This has been a good couple of weeks for missions to small solar system bodies: Last week we had the successful  Deep impact flyby of comet Hartley 2 (more on that in a sec). This week [3]JAXA, the Japanese space exploration agency, have announced that its epic, disaster dodging [4]Hayabusa space mission has succeeded in bringing home fragments of the tiny stony asteroid [5]Itokawa.

Hayabusa was launched in early 2003 to fly, using ion engines, to 500 meter long Itokawa and study its make up and  structure. The craft then landed on the lonely peanut shaped fragment of matter and tried to collect a sample of its surface. The images and spectrometer data from the mission have already changed our understanding of small asteroids, revealing that Itokawa was a [6]pile of rubble covered with odd looking smooth patches. The spacecraft itself has [7]flight proven new technologies like the [8]ion engines. Now the cake has its icing, and JAXA can truly claim Hayabusa rests in a state of 'mission accomplished'.

The word Hayabusa means peregrine falcon, and this Japanese mission to bring home fragments of an asteroid has indeed soared. But perhaps it ought to have been named 'plucky little phoenix'  for Hayabusa suffered set back after setback and returned from the edge: [9]Huge radiation storms, [10]malfunctioning ion engines, [11]faulty sample collection mechanisms, and then an agonising wait after its a sample return capsule made it back to Earth while JAXA scientists tried to determine if any of the ultra fine dust found in the pod was indeed from the asteroid.

Video above: Hayabusa is immolated in the upper atmosphere, as the sample return capsule returns to Earth. Courtesy of Fairfax Media.

Well [12]JAXA have announced that most of the 1500 or so micron sized dust grains are from asteroid Itokawa. [13]By comparing the grains in the capsule to the rocks and fine particles found at the launch site and the landing site the science team were able to rule out terrestrial contamination. In particular the  ratio of iron to magnesium is a much better match for Itokawa ( as measured by the probe) than for Earth rock.
Most of the grains are less than 10 microns (0.01 mm) across, making them difficult, but not impossible, to analyse. In addition the Japanese [14]Asahi news paper reports that 50 or 60 larger particles with sizes from 0.01mm to 0.1 mm have been recovered.  And this is just pod A, Pod B has yet to be opened!
Which means that the Hayabusa mission and team have made it, perhaps tired and bruised but made it, across their final finishing marker......

Hartley 2 flies in a swarm of snowballs:

Getting back to Deep Impact and Hartley 2: Wednesday saw a [15]NASA press briefing revealing some more results from [16]last weeks flyby of comet Hartley 2: Things just get more interesting. Firstly the CO2 coming from either end of this deep space wanderer is confirmed, and to make the picture more complex the smooth neck connecting the two lobes is emitting water vapour more like a regular comet. This comet seems to have something of a Jekyll and Hyde personality. 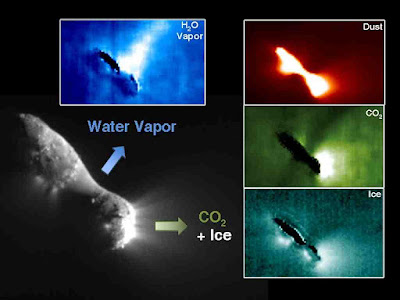 Image above: Infra red images tuned to detect the various components of the blizzard coming off of Hartley 2's tiny surface. Image courtesy of NASA/JPL
And then the plot thickens further: the CO2 jest have liberated  'snowballs', or particles of ice from golf to football size which are fired off into space by the jets:
"When we first saw all the specks surrounding the nucleus, our mouths dropped," said Pete Schultz, EPOXI mission co-investigator at Brown University. "Stereo images reveal there are snowballs in front and behind the nucleus, making it look like a scene in one of those crystal snow globes."

Video above: Chunks of ice and snow whirl through Hartley 2's tenuous coma. Courtesy of NASA/JPL-Caltech/UMD/Brown.

The probe even bulldozed through a number of 'snowflakes'. There is little doubt that the data from Hartley 2 will be getting more interesting still.....

Two Masters students, Rik van Lieshout and Tullio Bagnol, for the [17]University of Amsterdam's (UvA) Anton [18]Pannekoek Astronomical Institute (IAP) have used a new instrument to produce a [19]detailed study of a protoplanetary disk around a [20]Herbig Be star, a star withe around six times the mass of our sun.

The IAP specialises in the study of stars living in a dusty environment- whether these be [21]elderly stars belching ash into space or [22]sputtering young ones still gnawing at the [23]remnants of their birthplaces. The two students, overseen by Professor Rens Waters, were exploring the question of whether or not a star so much chunkier than the Sun could still form planets. To look for clues they chose to study the nature of the disk around a star called MWC 142, and the students have manged to wring a remarkable amount of data on this place form the relatively meager amount of light that makes the journey here to Earth. The star is surrounded by a protoplanetary disk, and by measuring the spectrum of light coming from parts of the disk at different distances from the central star the two intrepid explorers have shown that the pancake flat inner disk is composed only of gasses.

Image right: A rendering of the structure of the protoplanetary disk around MWC 142. Image courtesy of the University of Amsterdam.

This confirms models of disk structure around such stars, which predict that the Herbig Be stars radiation should vapourise all dust particles within a distance roughly the same as the orbit of Mars. This is important to the study of other , older , star systems of the same type as we now know that any planets found within that distance must be immigrants from the outer parts of that star system.
The students were also able to measure the shape of the disk: the inner disk is a flat as an Amsterdam pancake, though not perhaps as tasty, and the outer disk is flared at the edges. From the intensity of one of the emission lines corresponding to magnesium the students are even able to have a stab at how far from the surface of the star the inner edge of the disk lies - they find it to be about a tenth of an astronomical unit.

The press release mysteriously mentions that the study was done using a 'new instrument' developed by staff from K.U Leuven. A bit of research and background reading leads me to believe that the new instrument is probably a device named [24]HERMES.

Image left: The HERMES adaptor attached to the Mercator telescope. Image courtesy of the Catholic University of Leuven.

HERMES ([25]High Efficiency, high-Resolution Mercator Echelle Spectrograph) and was built by the IvS ([26]Catholic University of Leuven), the IAA ([27]Institut d’Astronomie et d’Astrophysique, Université Libre de Bruxelles), the [28]Royal Observatory of Belgium and smaller partners of the [29]Landessternwarte Tautenburg (Germany) and the [30]Geneva Observatory (Switzerland). HERMES is a [31]spectrograph, a device that spreads the incoming light into a spectrum, and measures the intensity of various wavelengths within that spectrum with great sensitivity, and in this case unprecedented [32]spectral resolution.

Image right: The Mercator telescope in full. Image courtesy of the Catholic University of Leuven

It is attached to the [33]1.2 meter Mercator telescope at [34]Roque de los Muchachos Observatory on La Palma Island, on the Canary islands. The size of the telescope used in this study is a humdinger advance in itself - before now studies of disks around other stars have only been possible with space based instruments, or the largest telescopes here on Earth. That a [35]relative lightweight like the the Mercator can now study the protoplanetary disk around a distant star promises a slew of further enlightenment on the growth of solar systems.

......in other news [36]asteroid hunters spotted a space rock only ten feet across that buzzed Earth this week: The little scamp, called 2010 WA, is zero threat but it is a good example of how searches for asteroids crossing Earths path are becoming more sensitive. Despite being tiny 2010 WA is not as dull as you might think; it tunrs out that [37]it has the second fastest rate of spin of any asteroid measured to date, and is surpisingly light in colour.....

.....And, while it has nothing directly to do with the Ancient Solar System this stunning (real life) image, taken in the cupola of the [38]International Space Station is just too succulent to pass unmentioned:

Image above: Tracy Caldwell Dyson ponders the Earth below her. This looks like it should be on the cover of Alastiar Reynolds latest book! Image courtesy of JPL/NASA.
[39]Read 'blue' by Stuart Atkinson on universetoday.com.

I hope you enjoyed the mish of mash -  next week back to something a bit more focused: Remnants of an age when our solar system was home to hundreds of active terrestrial planets......