Waters older than the oceans....


I blog today from a bus in the Scottish highlands. It's spectacular, but it's a miracle there's any Internet connection at all up here.

So bear with me.

In 1983 a research team led by Jeffrey L Warner, studying samples of stony meteorite [1], found something unusual inside them: Luridly purple salt crystals [2] called Halite - common enough on Earth, but fragile, and seldom found in meteorites.


Inside those crystals they found tiny cavities, only a few microns across (one micron is one thousandth of a millimetre, or about the length of a smallish bacterium).

Image above: A super close-up of a tiny reservoir of water, trapped inside a blue halite (rock-salt) crystal, from the Monahans meteorite. The bit marked 'V' is a bubble of vapour, within the inclusion, and the bit marked 'L' the liquid part.. If you held it up to your ear, would you hear the whisper of ancient underground seas....no, that's just tinnitus. Image courtesy of Virginia Tech.

Inside those cavities they found water. Incredibly ancient water, that had been sitting inside the salt crystals for 4.5 billion years. Water carrying chemical clues; to what existence had been like for the rocky parent bodies, and how they had formed.


Meteorites, generally, are chips off larger objects: Protoplanets, many of which are thought to have been warm enough for an active geology, melting the ices inside them, and giving rise to subsurface water flows.


Water is an excellent carrier for chemical reactions, that’s why your insanely chemically complex body is better than three quarters water. So, when immersed in water, things could happen that otherwise wouldn’t have, especially if that water is saturated enough with something that crystals of it start to grow – and so the wet, underground rocks on these protoplanets began to grow salt crystals.


Crystals are funny things: They grow, they seed off pieces of themselves, and as they grow, sometimes a tiny bubble of the water they’re growing out of gets trapped on all sides by crystal, without filling up with crystal itself - Geologists call this a ‘fluid inclusion’ 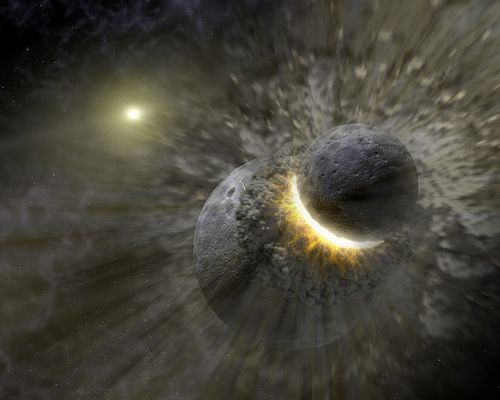 Image above: Protoplanets running into each other head first, at speed -  that's why the sky is full of rocks!

Then the protoplanet gets run into by something big: Another protoplanet, and possibly big enough to do totally pulverise it, scattering rocks across space.

Four and bit billion years go by. The rocks are preserved by the vacuum of space. Then a huge wall of green-blue makes an appearance – Earth. And a few minutes of violence, heat, and plasma later the rock is sitting on Terra Firma, for the first time in longer than the age of our world.

The rocks get picked up by one of the meteorite hunting expeditions that scour the ground after a large meteorite is seen, and get given names, like…. um, ALHA 77256. Well, no-one said life would be fair.

Research monkeys* chopped the rocks up, and looked at them with microscopes, electron microscopes, Raman spectrometers [5], and ion microprobes [6]. They found the water, still waiting, after all that time.

And, because the water still contains the chemicals that were reacting in it when the crystal formed, that water is a snapshot of what was going on at that time. Even if it’s only the tiniest droplet.

Since Jeffrey Warner looked into those salt crystals [3], fluid inclusions have been found in a wide variety of meteorites, including the carbon rich rocks [4] that are thought to preserve the earliest materials and processes of the solar system.

What have they taught us?

The most important thing, is how hot the waters were: Some rocks show that they were rinsed by waters up to one hundred and fifty degrees Celsius. Others were never warmed above thirty. Ther’re suggestions that the water ebbed and returned, causing episodes of crystal growth. These waters were rich in salts, and contained carbon based chemistry, even in the relatively carbon-compound poor ordinary chondritic meteorites. Through these measurements we are beginning to build up a picture of the character, history, and processes, at play on these worlds that were gone long before the Sun rose over a molten early Earth.


Scientists hope for more: The fluid bubbles might act as time capsules, preserving structures such as organic carbon globules from the pre-solar nebula.

A four point five billion year journey, carrying capsules of water from deep space, delivering us on Earth the story of a long dead world.

Not a bad result, for someone pausing to pick up a rock lying on the floor….