Answers for Authors: What colors are other worlds?


On the face of it 'what colors are the other worlds in our solar system?' seems like a no brainer that can be solved by fifteen seconds on Google images: Mercury is grey, Venus is white, the Moon is grey, Mars is red.... true, things get a bit more complicated when we get to Jupiter (stripey), and its moons (we have to say things like 'imagine a reeaaly angry pizza' to describe Io)...

...but Saturn is yellow, Uranus and Neptune are blue, and that's it, right?

Well of course not, or that'd be the end of this article.

The thing about other worlds is that they are f, well, worlds. There's a lot of room on each for lots of different colours. Lets take a look at the Moon, our nearest neighbour: Since it's so conveniently close you may actually be able to stick your head out the window and do this, and it probably looks a silvery white colour.

But, if you land on it, you see a landscape like this:
The word you're looking for is 'grey'. Except... look closer still, and it's not. Let's take a close look at the lunar soil samples returned to Earth. There are white, grey, and black particles in there. But amongst them are particles like this...

These are all coloured by beads of volcanic glass, spat out by lunar volcanoes. The different colours are caused by differing chemical impurities. Patches of oddly coloured soil can be found all across the Moon, where one impurity or another has come to dominate for some reason. So, the colour of the Moon depends on how closely, and where, you look at it.

Uh-uh. To keep this manageable, let's just focus on the Martian sky:
No human has ever been to Mars, so what we know of the colours there comes from cameras. And a lot depends on how your calibrate your camera: Even a fairly small change can turn an alien sky.... 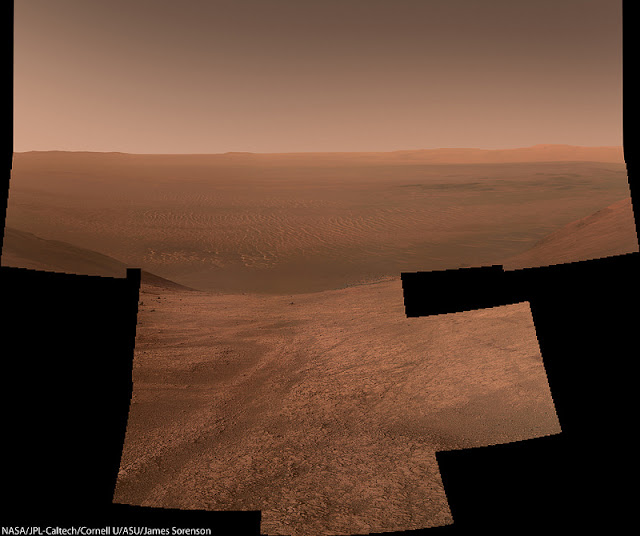 That's caused a lot of 'NASA is hiding the truth about Mars!*' stories over the years. But, even when you get the colour balance right, the Martian sky really does change colour from hour to hour. During the day the sky is technically a faint blue**, but endless dust in the atmosphere changes it to a light pink or butterscotch:


When it's cloudy the sky can appear white, or grey:

During a Martian sunset the sky is often a vivid blue, due to ice particles in the upper atmosphere:

So the Moon isn't white and the sky on Mars is blue, (or tan, or white, and it could all be wrong anyway if the camera's haven't been set up right).

We could keep going all day with examples of how colour is a complicated question on other worlds: There's 'enhanced colour' where a computer program brings out colour differences too subtle for the human eye to detect. Then there're colours beyond the range of a human eye, like infrared and ultraviolet, which are very important on worlds like Titan: There the sky is opaque orange in visible light, but clear in the infrared - so when you see maps like these, taken from space, of Titan's methane/ethane lakes you're actually looking at infra red colours no normal eye can see.

So go forth and Google, feast your eyes on the many colours of the solar system out probes are sending home - and remember that every world can throw us surprising new shades of beautiful...


* I'm not saying they aren't hiding the truth about Mars, just that if they got the colour wrong it's more likely they just ballsed up the color balance.

** The process that makes Earth's sky blue, Rayleigh scattering, also works on Mars. But the yellow/pink colour of all the dust in the air overpowers it on all but the calmest days.
Posted by John Freeman at 08:44