What has Dawn found at Vesta? Could it be ice? (Update: No it's not)

Update: No, it's not ice, but it is an amazing glimpse into a world that records the earliest history of our solarsystem. More to come!

How's my blogging? Leave some feedback, I get better at this, you get a better read!
Video above: DAWNs Low Altitude Mapping Orbit of Vesta. Courtesy of NASA/JPL-Caltech

NASA has announced a press conference to talk about the Dawn [1] spacecrafts latest findings at the humongous, 400km, asteroid-slash-protoplanet Vesta [2].

Kick off is 2pm EDT, 7pm UK time.
So, guesses as to what it's about?
The list of panellists is:

The current phase of DAWNs mission, LAMO (Low Altitude Mapping Orbit), is all about mapping Vestan composition. We have mainly people involved in compositional mapping instruments on the panel, and David O'Brien.
Dr O'Brien lists his research interests as :

Collisional and dynamical evolution of asteroids and trans-Neptunian objects

I think 1 and 2 are the most relevant here. So we have a compositional finding probably relating to either thermal modelling of the Vestan surface, or its collision history. Or both. Hmmm. I recall a recent article on the possibility of water ice at high lattitudes on Vesta [3], I wonder if there’s a link (Composition, temperature, cratering, impact history -important factors in the formation of ice deposits). Ice at Vesta would be big news, as Vesta has been thought to be bone dry after massive basaltic lava eruptions covered its surface early in its history.

Let's see at 7pm! (go to the NASA website for the latest news) 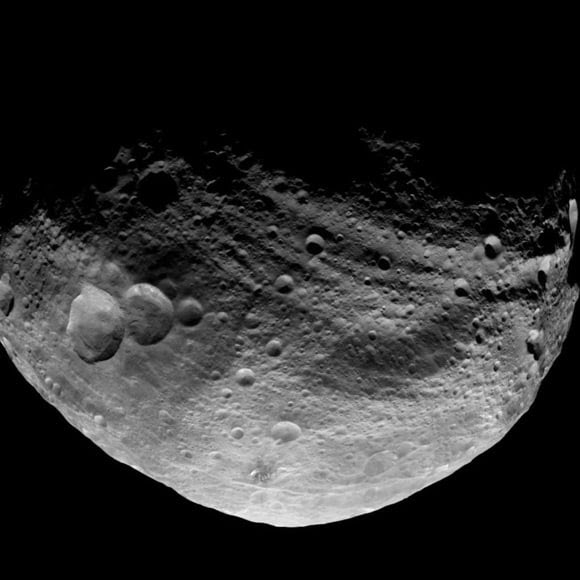 Image above: Vesta. Like a potato, but 400km across, 4.5 billion years old and covered in frozen lava. So not much like. Disagree? What kind of potatoes are you growing?
List of links:
[1] http://dawn.jpl.nasa.gov/
[2] http://www-ssc.igpp.ucla.edu/personnel/russell/papers/CeresVesta.pdf
[3] http://www.space.com/14361-hold-thu-1-26-huge-asteroid-vesta-packed-water-ice.html
Posted by John Freeman at 07:37