Hayabusa 2: Putting holes in an asteroid.

JAXA, the Japanese space agency, is considering the 'exploration by blowing holes in things' approach for its now-under-construction Haybusa 2 space probe: Something called the 'Crackup installation [1]'  may be added to the probes suite of abilities.

The Crackup has two parts: An explosive charge and a solid, 2 kilogram, 'bullet'.

Yes, that sounds like a cannon to me to.

While the Crackup is deployed over one side of the target asteroid, Haybusa 2 will sensibly fly around to the other side. The explosive will go off, shooting the 'bullet' into the asteroids surface, blowing a two meter crater in its hide. Haybusa 2 will then come back, probably trying to look innocent, to inspect the hole and take samples from inside it.

There's a good track record of learning about things in space by hitting them with other things and seeing what gets splattered out. From the Deep Impact [2] mission to comet 9P/Tempel [3], to the LCROSS [4] mission that drove a used centaur rocket into the Moons south pole to look for water. 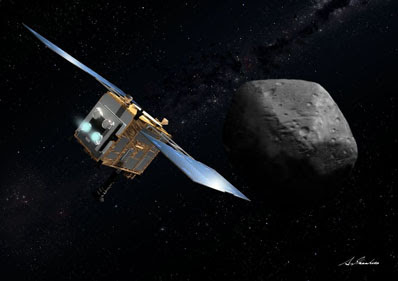 ...Look, it's not just an excuse to buy a white cat, complain about your goons incompetence, and go 'mawahahaha!' Drilling neat holes in things in space is nothing like as simple as taking a power drill to a chunk of wood. Without gravity to hold everything down you'd need to press the whole probe hard against the thing it's drilling, for starters. That means more weight, more complexity, and more money. And that money stuff is hard to come by.....blowing holes in things is much easier.

Video above: The Deep Impact space craft demonstrates how NASA goes about digging a hole, as its 370 kilogram copper 'bullet' hits the surface of comet 9P/Tempel. Haybusa 2 won't be aiming to make nearly such a big bang - comet Tempel is seven kilometres across, 1999 JU3 is less than one, so too big a bang could take it apart completely. Um, so maybe that makes the video less than perfectly relevant.... well it's still cool to watch. Video courtesy of JPL/NASA, uploaded to you tube by mynameisdim.

But why put a hole in asteroid 1999 JU3, specifically? Why not just scrape some stuff off the surface?

Well, the following is just my guess, but if you'll indulge me:
1999 JU3 [5] is a C-class asteroid [6]. These are especially interesting  because they are both rich in carbon compounds (life on Earth is carbon based) and show signs of being in contact with liquid water [7] on the protoplanets they came from. Fragments of C-class asteroids that hit Earth - carbonaceous chondrite meteorites [8] - have been found to contain chemical compounds [9] relating to the start of life on Earth, and contain some of the best preserved material [10] from the solar nebula [11] that the solar system formed from. We really, really, want pristine bits of 1999 JU3 for study here on Earth.

The surface of 1999 JU3 won't be pristine. It will have been exposed to high energy UV photons, x-rays, high speed protons - all the raw and deadly stuff from the Sun that Earths atmosphere filters out - for four and half billion years. So the material on the surface will be irradiated to buggery, and we want to get at the unaltered good stuff below the surface.

That'd be my excuse for shooting up yet another object in space anyway.......

Image above: Asteroid 253 Mathilde, the only other C-class asteroid to be visited by a spacecraft from Earth. On the left is true colour, on the right enhanced colour, showing subtle variations in the surface The NEAR [12] probe flashed by it, on its way to the asteroid Eros. See, they both got cool names... Image courtesy of NASA/JPL/Cornell .

Incidentally, the Hayabusa 2 website describes the probes target as "the asteroid temporarily named 1999 JU3". So here's hoping they've got an inspiring real name for it in the works....