How's my blogging? Leave some feedback, I get better at this, and you get a more interesting read!

No, not that kind of super bugs. Image courtesy of  J. K. Moore.

Here's two interesting facts about life: It can survive exposure to space for over a year, and it can turn a continent wrecking meteorite impact to its advantage.

No, not you, unless Superman is reading this. I'm talking about some of the simplest life there is: Microbes.

If Superman is reading this: Please could you do something about the rush hour traffic for me tomorrow morning? Thanks.

Microscopic lifeforms, including the well known tough guy B. subtilis [1], were sent into space as part of the Expose-E [2] experiment. Expose-E simply sat on the outside of the International Space Station [3], with two trays of micro-organisms exposed to space, and a third exposed to simulated Martian surface conditions - the Martian surface being a little friendlier than open space in some ways, but with 200 mile an hour sandstorms and occasional CO2 frost. The B.subtilis organism has a means of surviving adverse conditions: It forms a endospore [4], a dried out, almost crystallised, version of itself.

Image above: B. Subtilis, as seen under an electron microscope. Each one is about a micrometer long, but their tough. I mean, they couldn't beat you up single handed, but they can survive almost anything. Image courtesy of NASA.

The results are an impressive underlining of how tough some life forms are: On the stations outer hull these spores took the full beating of the Suns electromagnetic fury, the dessication and radiation of space, and the 90 minute swings from minus twelve degrees Celsius to plus forty.
The killer in space was found to be the high power UV from the Sun, which the Earths atmosphere shields us from the worst of. When exposed to the Suns fire-hose of high energy UV light most (although not all!) of the organisms were dead after 18 months. But the spores that were shielded from the suns UV laughed at the rest of it: Eight percent of the B.Subtlis exposed to hard space survived, as compared to control samples on the ground, an incredible percentage considering that you or I would last seconds at best.

The B.subtlis in the Martian simulation? They all survived. All of them. 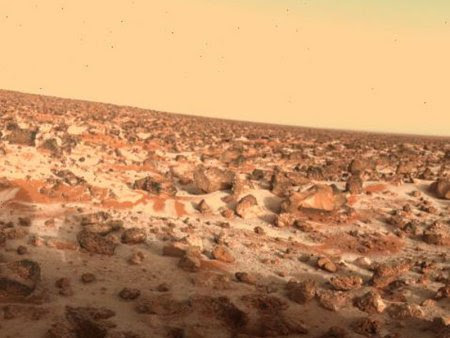 Image above: The Martian surface, on a frosty morning. Pretty, but making a cup of tea there is hard work. And I wouldn't survive without tea. Or oxygen... Image courtesy of NASA/JPL.

And some of the lichens that were sent up survived even the UV [5]... which has attracted the interest of pharmaceutical companies looking to develop better sun cream -  if the lichens can be persuaded to tell how they do it... well, eighteen months of resistance to space strength UV....

There is a lot more to it than that - in fact there's a whole special issue of Astrobiology magazine devoted to it. Follow this link [6]; even if you don't have access to the full articles, the abstracts alone are worth running your eye over.

So, critters can walk the walk when sat on the hull of a space station for 18 months. But how do they cope with a clobbering by a mile wide space rock?

Well, to answer this one, Charles Cockell from the University of Edinburgh took a team to the site of Chesapeake Bay impact crater -  and Aaron Gronstal was kind enough to make a diary of the expedition [10] for us all. This buried impact crater marks the spot where a kilometre wide asteroid (thats the same size as 2012 LZ1 [7] that passed Earth last week) smashed into the waters just off the North American continent.

Now being anywhere near that explosion.... doesn't bare thinking about, unless you like thinking about being flash fried, pulverised, and then hit by a three hundred meter tall tidal wave. But the team went to investigate how subterranean life - and life has been found happily living at depth of up to 1400 meters [8] -  had responded to the event. The surprise was that, in the rocks under the impact crater, there were more micro-organisms [9] than had ever been found at such depth before.

The teams explanation is nicely simple: The impact pulverised the rock beneath the it, opening up cracks and crannies that microbes could then move into, and allowing fluids containing nutrients to get down to them. And microbes are still in the process of moving into this new habitat today.

This has a strong bearing on the history of life on Earth: It's always been up for debate whether life existed in any form during the Late heavy Bombardment [11]. The LHB was a time of non-stop hits by large asteroids, and many have thought that the Earth must have been totally sterilised by it - although some of the evidence for it was recently questioned [12]. Yet the homesteading bacteria under the Chesapeake impact show that life could actually have found a way to make use of the blasts, sinking deeper into Earths crust, and find the most protected nooks.

Many martial arts teach that an attack can, if treated the right way, be turned against itself. Well these critters were applying the same principle at least thirty-five million years before Bruce Lee ever donned his Gi....