The pyres of giant stars...

If you're looking for the creation of the solar system, sooner or later you'll run into a paradox: It was born, at least in part, from a force cosmic destruction. One that makes a Death Star look puny: The Supernova.

Video above: A simulation of the collapsing bulk of a supergiant star, as it rips itself apart in a supernova. Anything standing on any planet within about a light year will be in big, big, trouble. It's pretty though, you can actually see the collapsing outer layers and the rebounding shockwave. Music: Wandering Star, by Portishead. Simulation by the Max Planck Institute for Astrophysics. Video uploaded to you tube by m3141592.

Most supernova are the deaths of the largest stars in the universe: Colossal pulses of energy that get given out by huge, old, suns blowing themselves apart [1]......some (called type 1a supernova [2], because 'thing that looks like an exploding giant star but isn't really one' takes up too much room) happen when a white dwarf, a stellar corpse, explodes.

But both types are powerful engines of birth, and the key lies in why they blow themselves apart.

I'll focus on the most common kind, the exploding-giant-star kind, and leave type 1a (white-dwarfs-turned-huge- fusion bombs) for another day:

Why does a giant star explode? A star is a powered by nuclear fusion [3]: The combining of two atomic nuclei [4] into a bigger one. When this happen to elements lighter than iron, part of their mass becomes energy - radiation or the kinetic energy of a high speed particle. Inside our Sun this is going on trillions of times a second, producing a colossal amount of energy. But the Sun doesn't blow itself apart on the spot*, because the Sun also has colossal gravity, so it's also trying to fall towards its own middle. The two forces balance [5], and the star teeters along this knife edge, for most of its life. Image above: The giant star Betelgeuse, the closest supernova candidate to Earth. The light and dark areas are giant spots on this monsters surface, caused by huge currents of plasma rising and falling. It's 430 light-years away, so for all I know it's already popped. Image courtesy of the Paris Observatory.

A star usually fuses hydrogen into helium. As it ages, hydrogen becomes more scarce. The core shrinks under its own weight, heating up in the middle. When it gets hot enough, it starts fusing helium into carbon, leaving a shell of hydrogen around the edge. The new form of fusion halts the collapse, until core runs out of helium. For a small to medium star, it stops there: The rest of the star puffs away, and the core becomes a white dwarf [6].

But in a big star, the core shrinks again, and starts fusing carbon into silicon, leaving a shell of helium. And so on, and so forth, until, in the very middle of a star layered like a gob-stopper, silicon starts fusing into iron.

Image above: The gob-stopper layering of a huge, old, rickety star. The various layers are still producing energy by fusion, which is why the iron core can be held up for a while. Each layer fuses for a shorter and shorter period of time, so by the time the star has reached silicon as a fuel it only has a week or so left: That's probably the signal to jump in a space ship and leave the area at a large fraction of light speed. Image courtesy of wikimedia commons.

Except fusing iron doesn't produce any energy. In fact nothing heavier than iron fuses to produce energy.....so when the core can't produce enough energy to hold the growing iron core up ....things for the star things go a bit sideways:

The iron core collapses under its own gravity.

And, this time, there's nothing that can stop it in time to save the star.

Exactly what happens next is fairly complicated, and, in some ways, still quite mysterious. But for our purposes: Imagine a huge bonfire, suddenly collapsing under its own weight. It's falling inwards but the blast definitely goes outwards, spreading a lot of sparks, smoke, and ash. Make the bonfire nuclear powered, and times by.....well just keep multiplying it until your head hurts. You still won't be close to just how huge the blast is, but you wouldn't get too close to something like that anyway.

Astrophysicists, as dedicated as they are, wouldn't either. Well, having known a few, they might. But, in any case, they can't. So instead, they try to understand what happens with computer simulations:


Video above: The moment that everything goes squiffy for our giant star: The core reaches a critical weight and collapses, beginning the process that will result in the star smearing itself across the sky, and flash frying any luckless planets it's got. This bit of the process takes only milliseconds, and you can watch the whole star start to become unstable, and the disruption spreading. Courtesy of the Max Planck Institute for Astrophysics.


Video above: A simulation of the star exploding, seen from the outside this time, and over the course of about nine thousand seconds. So everything you see in the previous simulation has happened so fast that it's invisible in this one. Courtesy of the Max Planck Institute for Astrophysics.

How does this build a solar system? The point is this: Up until now our huge star has made all the elements up to iron for us. It can't make elements heavier than iron and live, because making them won't produce energy to keep it inflated against its own gravity.

Well, it's not living any more.

As the core collapses, and forms a neutron star[7], the rest of the star follows it inwards at about a quarter of light speed. The star stuff hits itself, and the new born neutron star. Now there's a huge shockwave making its way back out of the core. The pressure and temperature goes through the roof, even compared to the kind of pressures and temperatures giant stars usually run at...and in all this chaos....iron is being made to fuse into heavier things:

The iron nuclei are running into each other, and combining. Everything is being bombarded by countless high speed neutrons, which the nuclei absorb, making them even heavier. In seconds, atomic nuclei have been built that are far to heavy to be stable [8]. They begin to fall apart, and the heavier they are, generally , the faster they disintegrate: Some of these will disintegrate so fast they can barely be said to have existed at all. Some may take billions of years to go completely - which is why things like uranium 235 can still be found in nature. This falling apart of nuclei, called fission [9], produces energy to, and the presence of these unstable atoms is what keeps the core of Earth warm.

So, by both living and dying, our supernova has given the universe all the other elements we find in nature, as well as a lot that decayed away long before we walked the Earth.

But the influence of a supernova doesn't end there...

Taking a big step back:

The core has collapsed into a neutron star. The remnants of the star that fall back onto the neutron star- one hundred billion degrees warm from the explosion - may make it heavy enough to undergo one final, endless, collapse, and become a black hole. 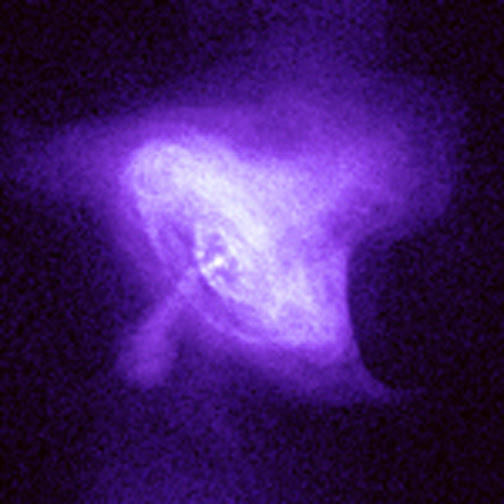 Image above: A close in view of the Crab Nebula pulsar, taken by the Chandra space telescope in X-rays. What you're actually seeing is the gas around the pulsar, heated up by the radiation coming from it. imaghe courtesy of NASA.

On all sides the rest of the star is speeding away into space, as a massive shockwave. It's carrying with it all those newly formed elements, and that shockwave will do two important things:
It will carry those newly formed elements into the surrounding clouds of dust and gas, and it will make those clouds of dust and gas collapse. The collapsing clouds will form a new generation of stars. And around the new stars, out of the heavy elements from the supernova, and countless others like it.... planets like Earth can grow. 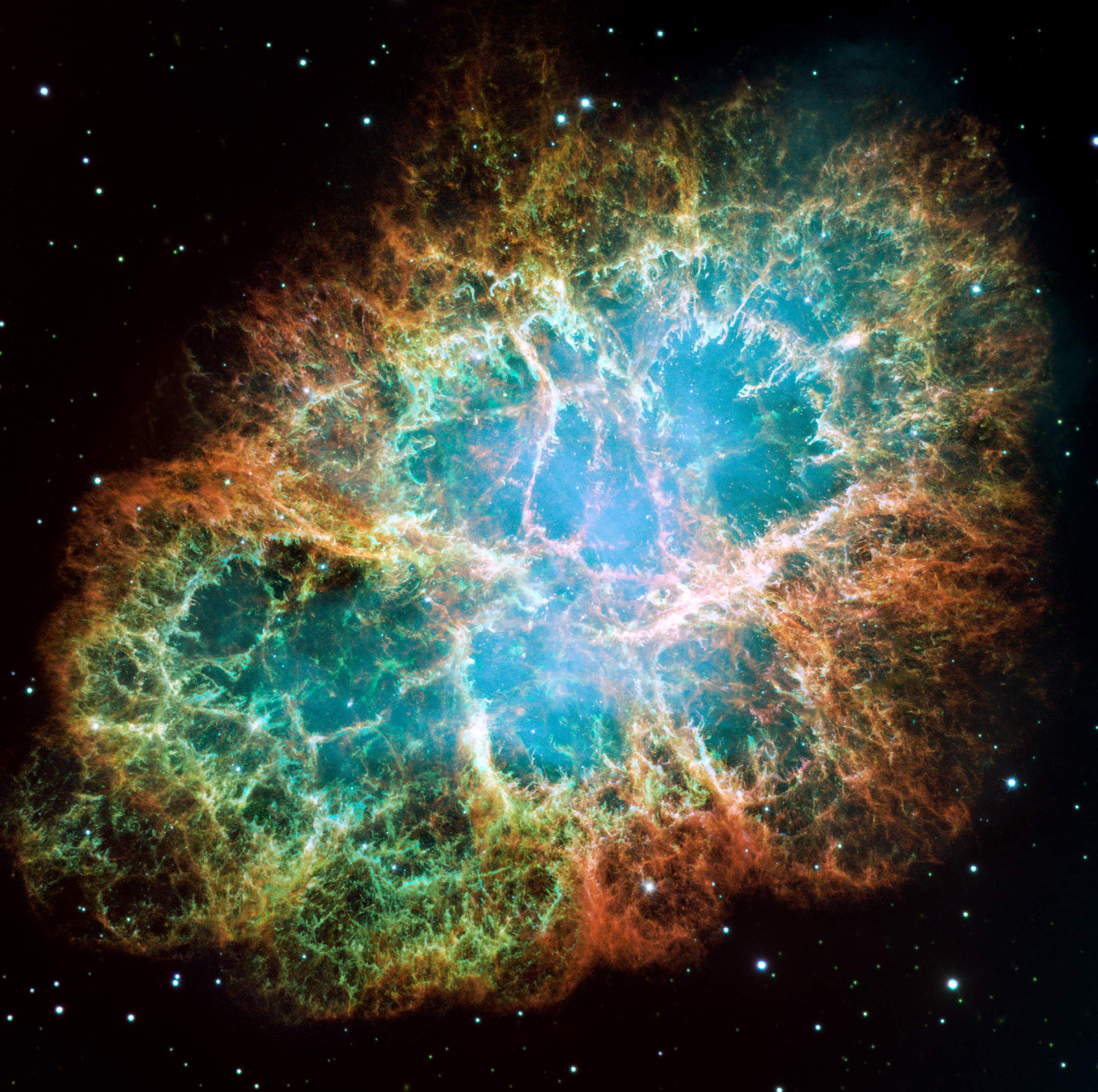 Image above: The Crab nebula, a massive cloud of dust and gas left behind by a supernova. No, I don't see a crab either. Image courtesy of NASA.

Carl Sagan said: We are stardust.

Almost everything you'll see today is stardust to....