My unsubstantiated opinion: Thirteen years on Mars - why? 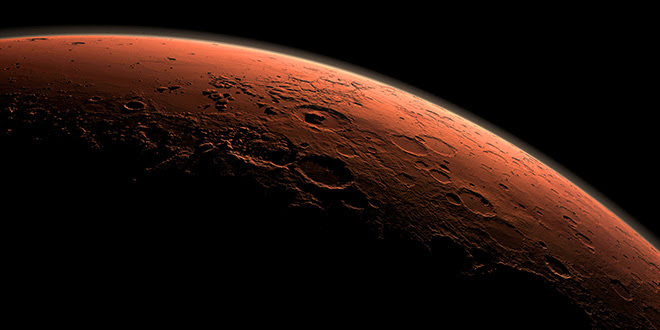 Thirteen years on Mars
Thirteen years ago two robots named Spirit and Opportunity landed on the planet Mars. Today one of 'em's still going - and the other survived for years.  Not bad for machines hat only had 90 day warranties, but what's even more remarkable is this: Since that day back in 2002 humankind has had a nonstop presence at the red planet. A third rover, the car sized, laser toting, Curiosity rover joined the surviving Opportunity rover on the surface. Curiosity has found unequivocal evidence of ancient, habitable environments. In the space above Mars there's a fleet of five orbiters scanning the planet - with more orbiters, aircraft, chipsats, even swarms of mini robots either en route,under construction, or on the drawing board.
No other world can make such a claim. Why?

Are we all just obsessed with the colour red? Did we all just read War of the Worlds to much as kids? Maybe, but to my veteran-space-geek eye the reasons for the space exploration communities (some would say excessive) focus on Mars is actually a combination of a number of factors:

Aliens!
Lets get the green four eyed elephant in the room dealt with: Mars isn't the most hospitable environment today, but there's plenty of evidence that, whether it was 'cold and damp' or 'warm and wet' ancient Mars was at least hospitable to life some of the time. All the same chemicals that came to Earth and contributed to the making of life also went to Mars. So there is a real chance that Mars once had life - and we could find traces of it. Or, just maybe, in some secluded and more hospitable niche on modern Mars, its descendants.

Aliens we can actually find:

But, hang on, Mars' heyday was over four billion years ago. And even then it might not have been as promising or interesting an environment as some we know are actually present today!

There's Europa, a moon of Jupiter with a worldwide ocean that's warmed by volcanic heat.
There's Ganymede, another Jovian moon that also hosts a volcanically warmed worldwide ocean.
Then there's Saturn's moon Enceladus, which has a sea around it's southern pole that's actually leaking out into space for us to measure. Because of this we know that that sea has organic chemistry, salinity, PH, and temperature suitable for life.

Then we have unconfirmed but tantalisingly possible oasis' on other worlds like Charon, Ceres...... why does Mars, the victim of environment annihilating climate shift, hold a candle to these as a destination suitable for hunting life on?

Well, all thing being equal, it doesn't - but then all things are not equal: Europa and Ganymede are five years travel from Earth, and they hide their oceans beneath kilometre thick shells of ice. Enceladus is located in the Saturn system, which is seven years away, and has a thick shell of ice (albeit a leaky one, but leaks aren't the same as actually being able to get to the water).

Mars however has any evidence of life preserved in rocks that are conveniently near, or on, the surface for our robots to study, and is only months travel away. What's more, at this point. we know how to work on Mars fairly well, whereas we're still finding our way with those other worlds. The reasoning is that of being able to actually get the job done, in an environment we already understand well.

Is that good enough reasoning? Shouldn't we be pushing the boundaries and going for the big prizes a bit more aggressively? Ideally I believe we should, but in a risk adverse era where budgets can be made or broken on the back of good publicity... well it's easy to see how those folk with the actual job of running space programs think differently. We're on our way to exploring these worlds, but we won't be able to do it as fats and as effectively as we can Mars for a while yet.

....Life isn't the only game in space exploration:

Let me be clear: It's one of my biggest hopes in life to live to see alien life - even of the very humblest single-celled kind - discovered. But the following is still not remembered often enough by space exploration advocates: We go into space to do other kinds of exploration than just searching for evidence of alien life: Titan has one of the most bizarre yet fascinating environments we've ever discovered - a frozen reflection of primeval Earth. Jupiter's internal structure hold key clues to the early days of our solar system. Venus' geology, chemistry, and meteorology are worth a dozen probes. Doesn't that deserve a similar investment in time and money?
Well, yes...at least in the minds of scientists as opposed to publicity hungry politicians (pardon my prejudices). But Mars exploration also covers many of the same fields tat, say, a dedicated program of Venus exploration would: Although Mars is associated with the hunt for alien life in most peoples minds, there's a lot about Mars that tells us about Earth, its history, it's environment, that has nothing to do with there being (or not being) life there: Mars began life as a similar type of planet,  in a similar part of the solar system, with a similarly habitable environment and geology. Then the two worlds evolved in different directions, one a hyper-arctic desert, the other a lush world. Understanding why the differences arose will teach us things about Earths geology, origin, environment, and how that environment might change.

Still..... Mars is, in many ways emblematic of space exploration, and the things it seems it could do if it had the money, and the political will behind it. So much so that I wonder if the degree to which we're focused on Mars isn't partly because it's so much a part of our popular consciousness: After all, 'putting boots on Mars' has been a space dream that is just fifteen or twenty years away for as long as I've been alive, but there's no sign tat we're tiring of it. Which makes me wonder, in spite of all the good science that is being done at Mars, and all the even better science we'll do in the future: Are we really putting all our effort into Mars - and still putting hope into that eternally fifteen years distant dream of a manned landing - because that's the best route for science and exploration?

Or do some leaders believe we just need that dream....?

Well, at least it's keeping Matt Damon off the streets...


Elsewhere on the internet:

ESA gets a new director general

Mini glider planned for Mars
Posted by John Freeman at 00:19