What have Rosetta and Philae told us about comet 67P?

What we can learn from a comets acne:

The unfolding story of the Rossetta mission - and its comet lander robot Philae - is one of the big real-life 'to boldly go' dramas of recent times: The mission has swung from triumph to near disaster and back again, with the mothership taking amazing close up pictures before being force into deep space by the increasingly dangerous comets activity, the lander being the first human craft to land on a comet before being lost in the comets valleys for seven months and then dramatically returning.

But ESA didn't actually send Rosetta and Philae to 67-P to get into hi-jinx. They sent them to learn about the comet - and that's what they've been doing. The most recent science release is about the pits that dot the surface of 67-P and other comets. The pits have been a tantalising mystery for as long as they've been known: On most worlds they'd be the result of impact with other objects, but comet surfaces are much to fast changing for that. They could be the result of pressure build up as gas build below the surface, but when the Rosetta team actually observed an explosive outgassing event it didn't remove anywhere near enough material.
So what is behind the devastating acne of comets?
It looks like they're distant cousins to terrestrial sinkholes, and this tells us some unexpected things about how the inside of the comet is put together:
The pits range in size from around ten meters to over two hundred, and some are over two hundred meters deep. Their sides are lined with fractures, out of which the evaporating gasses from the interior gush. There are currently eighteen pits of interest on he comes surface, at various stages of growth, and they appear to tell the same story: The pits begin as vents, which are powered by evaporating ices n the subsurface. Over time the evaporation hollows out a cavern beneath the vent, and eventually the roof collapses, revealing a pit. Now the pit itself is exposed to the sunlight the erosion begins to move back from the pit walls, leaving a steep and jagged edge to the pit. Eventually the volatiles within reach of the surface are depleted, and the vent reaches a more gentle shape, and shuts down 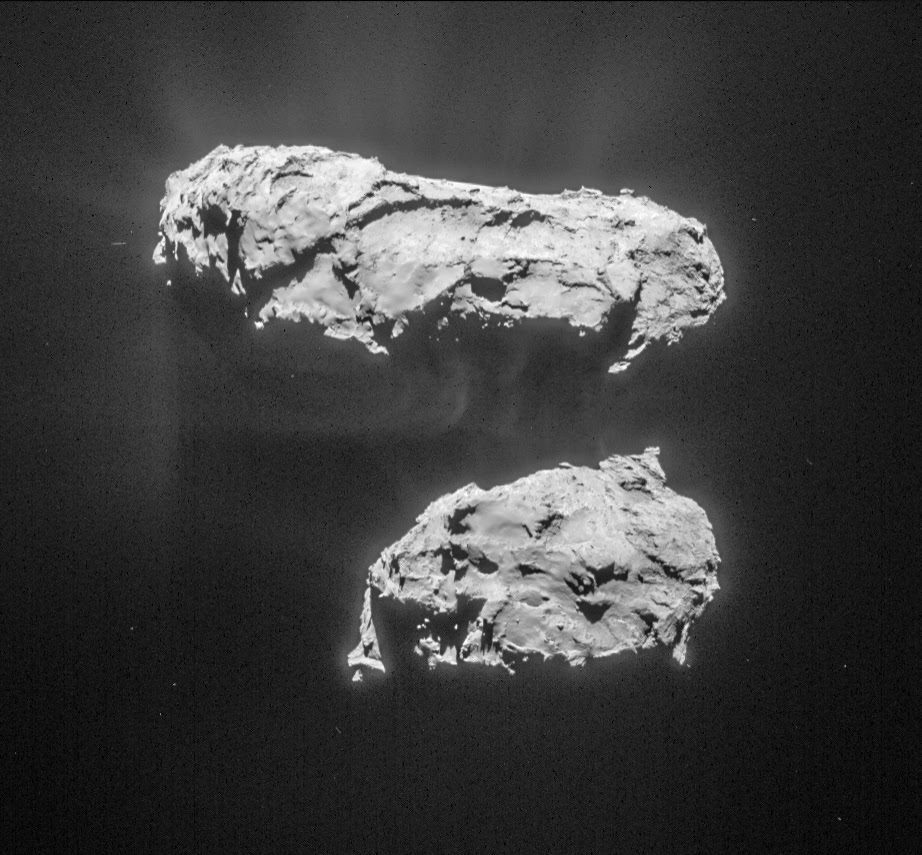 So that's one mystery (tentatively solved) But what else has Rosetta told us so far? Here're just a few of the results released so far:

Everyone is still scratching their heads. The bright spots on the surface, the one's that are visible from Earth? Yeah, we still can't work those out. And, as well as bright spots which no one can work out....
...the dwarf planet Ceres has a pyramid shaped mountain, striped with white, that no-one understands either: