This will be my 200th post, and it couldn't have fallen at a more auspicious moment*: In a little under 12 hours the New Horizons space probe will tear past the dwarf planet Pluto at 15km/sec. The probe has been on a ten year voyage to the Kuiper belt -  a massive doughnut shaped ring of icy worlds with names like Sedna, Eris, Hauma, and Make-Make. New Horizons will fly through the middle of the Pluto system (Pluto and its moons Charon, Nix, Hydra and Kerberos) then move deeper into the Kuiper belt and visit more of the worlds there. As it rips through Plutonian space it'll be constantly manoeuvring, bringing it's sensors to bear on Pluto and its Moons. And you can track it as it does so, there's an app for it too!

Above: A simulation of New Horizons closest approach, courtesy of Fred Lochlear.

So what do we know so far?

Pluto has to be one of the oddest looking worlds we've encountered so far - there's pretty clearly a lot of things going on there: A very bright polar cap, areas covered in polygonal dark features, a huge ultra bright heart shaped plain, large dark plains near the edge of the disk, long belts of chaotic rumpled terrain.... what's going on? There are also features that look undeniably like titanic dunes, mountains.....

New Horizons is already on the case, and NASA held press briefing (link here) this afternoon to reveal some early results: The bright areas are made of a mixture of methane and nitrogen ice, and the dark areas are depleted in methane ice. The dwarf planet is surrounded by a halo of ionised nitrogen, which was detectable from five days out, which might suggest some surprisingly violent activity gong on on the surface. The New Horizons team have also tweeted that there are signs of frost transport everywhere, meaning that the ice on the surface evaporates and re-condenses elsewhere.

Pluto's not the only mystery: Charon is already confounding everyone's expectations. Instead of a light polar cap of ice it has a dark one, and its surface seems to be torn up with massive chasms, suggesting immense internal activity - in the distant past gravitational stress might have driven cryovolcanism, the way the gravitational stress from Jupiter drives intense volcanic activity on Io.... 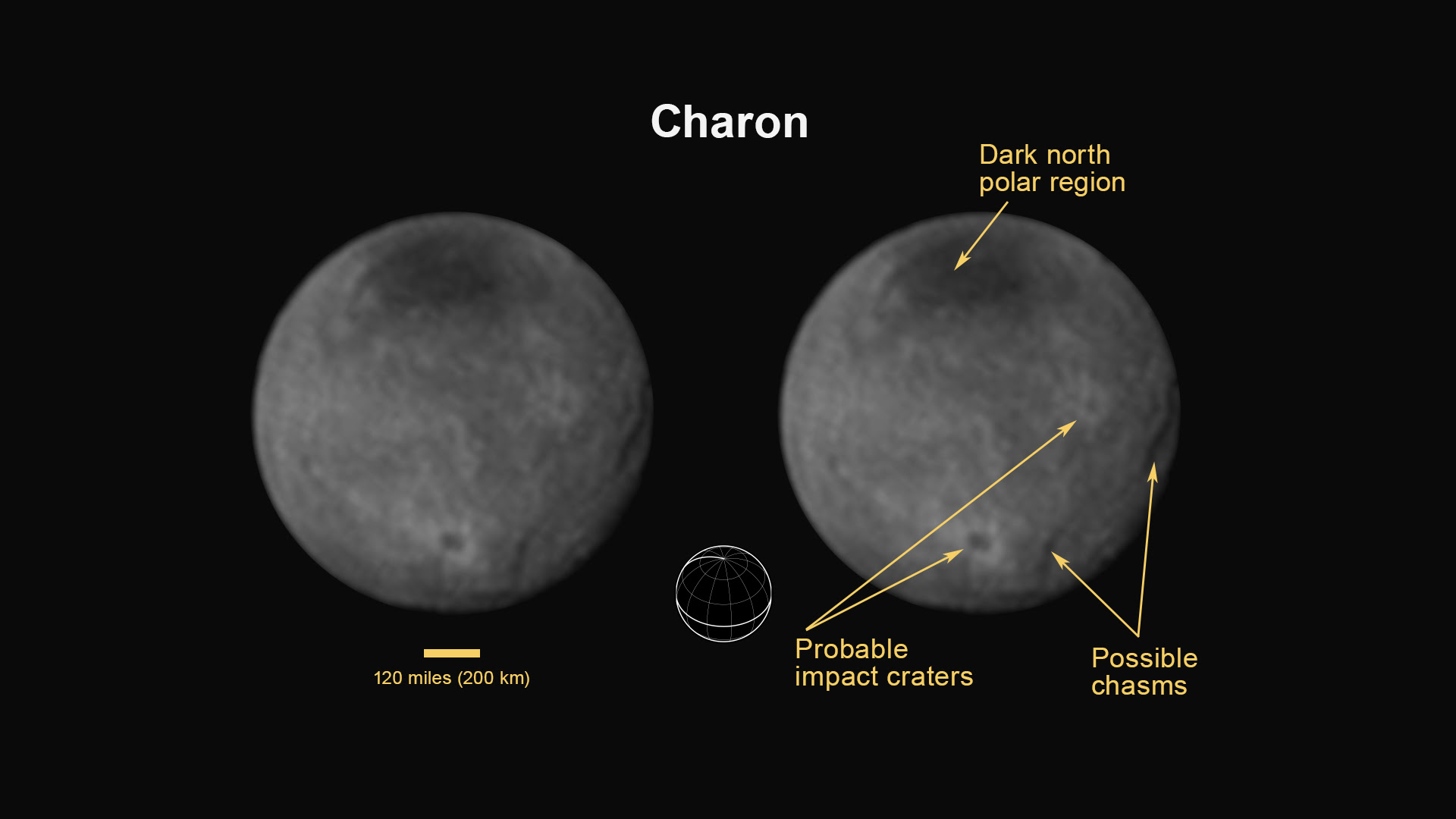 One possibility for the dark material is something called tholin - an incredibly complex tangle of organic molecules, heavily implicated in the origins of life.

What can we expect tomorrow?
Well, although some of the 'wow' shots will be downloaded fairly fast, the vast majority of the data from the probe will take weeks, maybe more than a month, to download back to Earth. So, unless there's a stunningly obvious alien city o the surface don't expect any major discoveries right away. The reason for this is that New Horizons is deeper into space than almost all the human space craft that have ever flown - there ain't no Internet out there folks..
For a bit more of an informed opinion here's Emily Lakdewala's Pluto preview - listen here  - and here's the flyby schedule.

Elsewhere on the internet:
Philae still talking to Earth
Is the Milky way's super massive black hole feeding?
Magnetars: the physics behind observations
Posted by John Freeman at 15:41